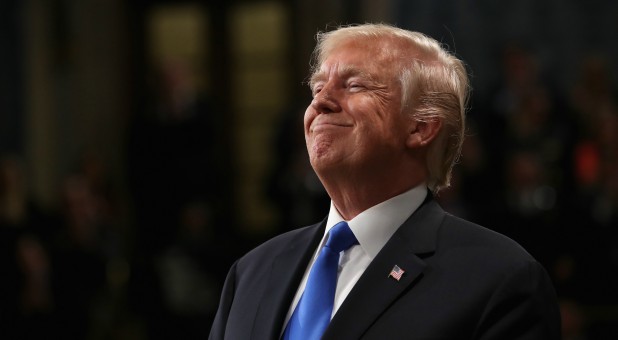 The Tectonic Plates Have Shifted

2/2/2018 JOHNNY ENLOW  CHARISMA NEWS
Earlier this week, President Donald Trump gave a powerful, if not historic State of the Union message. It resonated in the spirit realm and released all kinds of shifts in our nation’s tectonic plates of purpose and destiny. It is only appropriate that following the national address we went on to experience the rarest super blue moon, blood moon in 150 years. The things we are presently experiencing are truly unprecedented, and they are only going to increase in number and intensity. If you are kingdom-minded you could not have picked a better time to be alive. This despite whatever trial or contradiction you are presently going through.
For those who regularly listen to me, you are aware that I believe Trump has been handpicked by God to lead us as a nation at this time into an unprecedented place of prosperity and overall national destiny. I also regularly state that I cannot defend all of his comments and that some are clearly “non-presidential” and even mean. Perhaps the same trait that allows him to be resilient and tough enough to do what he has to do is that which has him at times short-tempered especially when attacked.
Our strength is often also our weakness. In the same way that God still uses us despite our own weakness, he still has a unique call on Trump’s life despite his lack of perfection. For some reason many believers do not understand that. For me, once I saw a vision that showed God had chosen Trump, from then on, I have sought to be in agreement with what God has shown me about him and his presidency. Once I discovered that God had chosen him for this incredible moment in history, from that moment forward as a prophetic voice, I knew I was not entitled to my own opinions but must represent Him as best as I can.
I am aware some of my many Hispanic friends and some of my black friends are actually almost scared to death of him and his policies and so I want to acknowledge this reality. He doesn’t ooze with diplomacy or kindness, and with the help of the dominant media, he becomes easy to demonize. I believe that before President Trump is done, black America will consider him the best friend and best president they have ever had. The coming prison reform and inner-city help and attention is going to be a game-changer, as they will see a president who didn’t just talk but is moved to action. Furthermore, I believe the Hispanic community will likewise find a president much more in tune with them than they ever imagined.
So, I want to report to you from a kingdom perspective and not from a political or personal bias and challenge you to consider that perspective above your political or personal bias. If you are a believer who values “seek first the kingdom of God”, you must put your kingdom identity ahead of your race, sex or political identity. Yes, I am aware that some of the same people today who implore you to support and honor Trump “because God has placed him as president” are the same ones who during the Obama presidency did nothing but bash, curse and circulate lies and half-truths about him—but found no place of honor for him, nor were able to pray for him. Remember that two wrongs don’t make a right and remember how that felt.
Trump’s God-given assignment is so powerful and extensive that I was shown we will be known nationally as “before Trump” and “after Trump.” In fact, the whole world will be known as “before Trump” and “after Trump.” As a nation, this presidency is being used by God to save us from a systemic “gangrene” of corruption that was so entrenched we would not have survived moving forward. Evil was entrenched in hidden, behind the scenes, power positions that were now humanly impossible to overcome. We needed help, we needed rescuing and God has sounded His Trump and come to the rescue. It is not Trump rescuing us. It is God rescuing us.

It is astonishing that in one year our president has been catalytic in causing $8 trillion to be added to the United States economy. For the Dow Jones to rise over 7000 points and set scores of records. For unemployment levels to be at record levels for almost everyone including the lowest ever for blacks- and Hispanics. For ISIS to essentially cease to exist as anything other than a terrorist group. For the greatest deregulation measures ever to take place that will positively affect business for decades to come. For making Jerusalem, Israel’s acknowledged capital—as will be the effect of the United States moving our diplomatic headquarters there. For in an instant, strengthening our military resolve to deal with evil around the globe. For stemming demonic foolishness in governments all over the world. The ripple effect of all he has done in one year is beyond what can be listed at this time—but believe me, we could not realistically be contending for reformation and renaissance in society if God had not disrupted everything status quo through placing Donald J. Trump in power.
Even since—and perhaps because of—Tuesday night’s speech there is another disruptive shift on us. Great angels have been dispatched to remove tares from the tops of the seven mountains. The #metoo campaign and repercussions has caused hundreds of powerbrokers on the mountains of society to lose their position. Now it is going to another level. These great angels are going to remove the top 10 evildoers on each and every one of the mountains of society (media, government, education, economy, family, arts and entertainment, religion). This is something I was shown and told to decree into—last night when I was awakened in the middle of the night. Additionally, the greatest traitor of America is going to soon be removed, as his cup of iniquity is full.
Perhaps not unrelated, also this week in California, 510 individuals in the human trafficking network were arrested including a former government official of significance in the state. There is severe gangrene in government in California that is about to be exposed and it is going to be shocking I believe. Widespread government corruption both in moral and financial matters are not going to be able to hide anymore as the angels are removing the dark lids. Every kingdom-minded or kingdom-friendly worker in California government at every level will now begin to carry disruptive anointing—just by showing up. Light is going to do its work. Justice is going to come alive and shine throughout California. Great change is coming to the state. Furthermore, what you see here is also going to be happening around the nation.
It is also no coincidence that a 12-year-old boy named Preston Sharp from Redding, California, was highlighted and showcased by the president for his patriotism in placing more than 40,000 flags on veterans’ graves. This is attention coming to Redding for bringing patriotism and a culture of honor to the nation and they will surely be a “game-changer” towards transformation—both in California and in the nation. Bethel Church is catalytic for all of this, but it is now spreading beyond the church. This fire from Northern California is going to be like volcanic lava that gets shot out over the state, this nation and the nations. Yes, we have a good God, yes, He is in a good mood, yes, He has all power—and now the greatest showcasing on that ever is about to unfold in this initial stage of the kingdom age.
Finally (but there is so much more to say), all of what is converging on California, and all that is converging on the United States is because of our Papa’s great love for the nations. He is going to have scores and scores of nations that operate under the glory and light of His sons and daughters—but the United States is lead domino in all this, as well as a catalyst for it spreading among the nations. Its destiny is intricately connected and interwoven with Israel’s destiny—and that will become progressively more evident. May the Lord assist each and every,one of us in properly discerning His amazing work in our time and in our day. A baptism of fire is coming to help us all.

Johnny Enlow, international speaker and author of The Seven Mountain Prophecy, is the co-senior pastor of Daystar Church in Atlanta, Georgia, along with his wife, Elizabeth.
Connect with God in a deeper way as you read His Word. Select Bibles are now 50% OFF plus Free Shipping and a Free Gift. Show me the Bibles!
Encounter the Holy Spirit and develop a relationship that saturates you in His peace, love and joy. Explore the Life in the Spirit Series.
FREE GIFT! Download Pastor Bill Johnson’s 40-page mini eBook, The War In Your Head, and unlock your supernatural lifestyle. CLICK HERE
Love For His People, Inc. founded in 2010 by Steve & Laurie Martin. Charlotte, NC USA