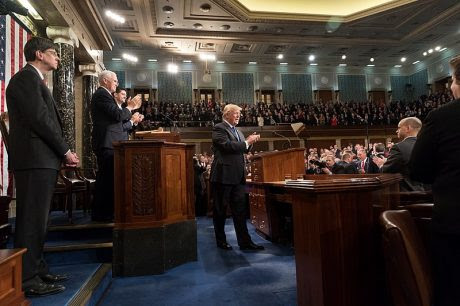 10 Amazing Facts About America’s Economic Recovery From Trump’s State Of The Union Address
Posted: 31 Jan 2018  Michael Snyder  THE ECONOMIC COLLAPSE BLOG
If the U.S. economy continues to surge under President Trump, I may need to change the name of my website.  In December 2009 I started “The Economic Collapse”, and it was quite an appropriate title at the time.  In fact, the 10 years immediately preceding the Trump presidency was one of the worst stretches for the U.S. economy in our entire history.  But now things are changing.  Manufacturers are coming back to America, unemployment is falling, and the stock market has been soaring.

During his State of the Union address, President Trump called this “our new American moment”, and at this time it is hard for anyone to disagree with him.  Things are definitely better for ordinary Americans than they were under previous administrations, and even some of Trump’s most hardcore critics are starting to come around.

The Democrats were hoping to use Trump’s speech to launch a new wave of attacks against him, but that massively backfired.  The State of the Union address may have been Trump’s best performance to date, and even a CBS News poll found that his speech got an astounding 75 percent approval rating.

No matter how Democrats try to spin things, the truth is that there is a lot of good economic news right now.  The following are 10 amazing facts about America’s economic recovery that come directly from the transcript of Trump’s State of the Union address…

#1 “Since the election, we have created 2.4 million new jobs, including 200,000 new jobs in manufacturing alone.”
#2 “After years of wage stagnation, we are finally seeing rising wages.”
#3 “Unemployment claims have hit a 45-year low.”
#4 “African-American unemployment stands at the lowest rate ever recorded”
#5 “Hispanic American unemployment has also reached the lowest levels in history”
#6 “Small business confidence is at an all-time high.”
#7 “The stock market has smashed one record after another, gaining $8 trillion in value.”
#8 “And just as I promised the American people from this podium 11 months ago, we enacted the biggest tax cuts and reforms in American history.”
#9 “A typical family of four making $75,000 will see their tax bill reduced by $2,000 — slashing their tax bill in half.”
#10 “We slashed the business tax rate from 35 percent all the way down to 21 percent, so American companies can compete and win against anyone in the world.”

And today we received even more good news.

According to CNBC, U.S. businesses added another 234,000 jobs during the month of January…

The new year got off to a strong start for job creation, with businesses adding 234,000 in January, according to a report Wednesday from ADP and Moody’s Analytics.
Economists surveyed by Reuters had been looking for private payrolls to grow by 185,000.

Are you starting to understand why I am so proud to be a pro-Trump candidate for Congress?

Many of my opponents are doing their best to distance themselves from Trump.  In fact, one of my biggest opponents has said that Donald Trump “can go straight to hell”.  It is absolutely imperative that we fill this open seat in Congress with someone that is 100% pro-Trump, and if you want to see that happen I hope that you will join our team.

Many Republicans opposed Ronald Reagan during his early days in the White House too, but eventually everyone in the party came around, and that is happening with Trump too.
For example, just check out what former opponent Ted Cruz had to say about Trump’s speech…

“The president did an incredible job highlighting the parents of those who have lost their children to MS-13 and violent illegal aliens,” Cruz said. “Highlighting heroes, whether police officers and coastguardsmen or first responders across the country. And the president did a tremendous job overall focusing on jobs, on wages going up, on the historic tax cut.”
“I thought it was a very, very strong speech and a strong night for the president,” he added.

Meanwhile, the Democrats are being as bitter as ever.

Every time the camera flashed to Nancy Pelosi or any of the other top Democrats they looked like they were horribly constipated.  And one top Democrat actually couldn’t make it through the entire thing.  At one point Republican lawmakers began chanting “USA”, and that was way too much for Luis Gutierrez to handle…

Luis Gutierrez, the illegal alien-loving congressman from Illinois, appeared to be triggered during President Trump’s soaring rhetoric during the State of the Union address and fled the House chamber.
Trump praised the Capitol building, calling it a monument to the American people.
As applause broke out, so did chants of “USA! USA! USA!”
Gutierrez left his seat as several Democrats patted him on the arm as he retreated to a safe space.

And after the speech was over, the radical left was criticizing Trump for some of the most ridiculous things imaginable.

For instance, the ACLU complained that Trump used the word “America” more than 80 times in his speech.

And check out what Joy Reid of MSNBC posted on Twitter…

Church … family … police … military … the national anthem … Trump trying to call on all the tropes of 1950s-era nationalism. The goal of this speech appears to be to force the normalization of Trump on the terms of the bygone era his supporters are nostalgic for.

Are you kidding me?

Faith, family and freedom have never gone out of style, and the Trump movement is helping to restore pride in our country all across America.

This is our opportunity to take our nation back from radical leftists such as Nancy Pelosi, Joy Reid and the ACLU.  The 2018 mid-term elections are going to be the most important mid-term elections in modern American history, and if you believe in what Donald Trump is trying to do, I hope that you will stand with us.

Michael Snyder is a pro-Trump candidate for Congress in Idaho’s First Congressional District, and you can learn how you can get involved in the campaign on his official website. His new book entitled “Living A Life That Really Matters” is available in paperback and for the Kindle on Amazon.com.

The Little Foxes – Now Think On This by Steve Martin