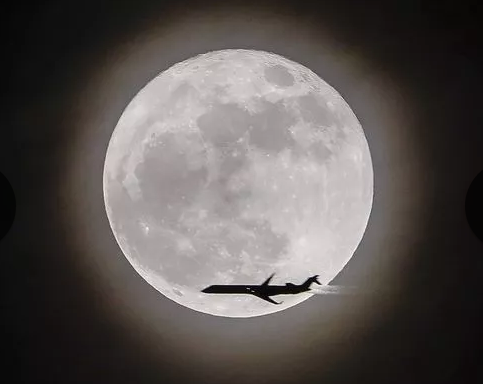 Triple treat: Supermoon, blue moon and lunar eclipse all coming to a sky near you next week

(Photo: Johnny Horne, The Fayetteville Observer via AP)
CONNECTTWEET 20LINKEDIN 2COMMENTEMAILMORE
Skywatchers will get a rare triple treat Jan. 31, with a supermoon, a blue moon and a total lunar eclipse.
How rare is the event? Even without the supermoon, it’s the first blue moon total lunar eclipse in the U.S. since March 1866, less than a year after the Civil War ended, according to EarthSky.org.
A blue moon — which occur about every 2½ years — is another term for the second full moon in a single calendar month. January’s first full moon occurred Jan. 1.
Though the exact moment of this full moon is 8:37 a.m. ET Jan. 31, the moon will appear plenty full for a day or two before and after that.
However, the moon won’t actually appear blue.
As for the total lunar eclipse, it will be visible early in the morning of Jan. 31 from western North America across the Pacific to eastern Asia, NASA said.
In the United States, the best view of the eclipse will be along the West Coast. For skywatchers in the central and eastern U.S., only a partial eclipse will be visible, as the moon will set before totality.
“The lunar eclipse on January 31 will be visible during moonset,” said Noah Petro, a research scientist from NASA’s Goddard Space Flight Center. “Folks in the eastern United States, where the eclipse will be partial, will have to get up in the morning to see it.”
The eclipse will last almost 3½ hours from the beginning of the partial phase at 3:48 a.m. PT until it ends at 7:12 a.m. PT, according to Sky and Telescope. Totality lasts a generous 77 minutes, from 4:51 a.m. PT to 6:08 a.m. PT.
By that time, however, the moon will already have set in the eastern time zone.
The full moon will take on a dark, reddish appearance during the eclipse, so another word to describe it is a blood moon. Adding to the naming confusion, this full moon was also known as the “snow moon” by some Native American tribes.
Finally, a supermoon occurs when the full moon is at the closest point of its orbit to the Earth, which is also called the perigee.
That makes the moon look extra-close and extra bright — up to 14% bigger and 30% brighter than a full moon at its farthest point from Earth, known as the apogee, NASA said.
Love For His People, Inc. founded in 2010 by Steve & Laurie Martin. Charlotte, NC USA