Pence Praises ‘the Miracle of Israel,’ Pledging to Open US Embassy in Jerusalem in 2019
01-22-2018
CBN News Jennifer Wishon
In a warmly received speech, Vice President Mike Pence told members of Israel’s Knesset the United States embassy will open in Jerusalem “before the end of next year.”
“By finally recognizing Jerusalem as Israel’s capital, the United States has chosen fact over fiction, and fact is the only true foundation for a just and lasting peace,” Pence told members.
In a wide-ranging speech the vice president called on Palestinians to return to the negotiating table, delivered a message of friendship to the people of Iran and celebrated long-awaited aid being delivered to persecuted Christians.
Related Since 1776: The Amazing Tie Between Ancient Israel and America’s Founding Fathers Israeli, Jordanian Relations Back on Track

“For the first time we are providing direct support to Christian and religious minorities as they rebuild their communities after years of repression and war.”
To Palestinians he said, “Peace can only come through dialogue.”
Arab members of the Knesset boycotted his speech.
“We recognize that peace will require compromise, but you can be confident the one thing the United States of America will never compromise is the safety and security of Israel. Any peace agreement must preserve Israel’s ability to defend itself by itself,” he continued.
The vice president celebrated U.S. and allied victories against ISIS and made a bold promise. 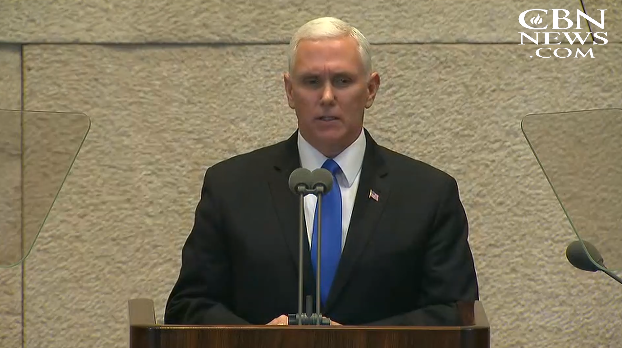 “The United States of America will never allow Iran to acquire a nuclear weapon,” he said to applause.
“The Iran nuclear deal is a disaster,” he said, repeating President Trump’s promise that the U.S. will withdraw from the deal unless it’s fixed in the coming months.
He also delivered a message to the people if Iran.
“We are your friends,” he said. “And the day is coming when you will be free from the evil regime that suffocates your dreams and buries your hopes. We are with you, and when your day of liberations finally comes, and come it will, the friendship between our peoples will blossom once again.”
And Pence praised religious freedom in Israel. “I believe that all who cherish freedom, and seek a brighter future, should case their eyes to Israel and marvel at what they behold,” he said.
“The miracle of Israel is an inspiration to the world and the United States of America is proud to stand with Israel and her people as allies and as cherished friends,” he concluded.
Watch full speech here: Pence Speaks To Knesset

Since 1776: The Amazing Tie Between Ancient Israel and America’s Founding Fathers