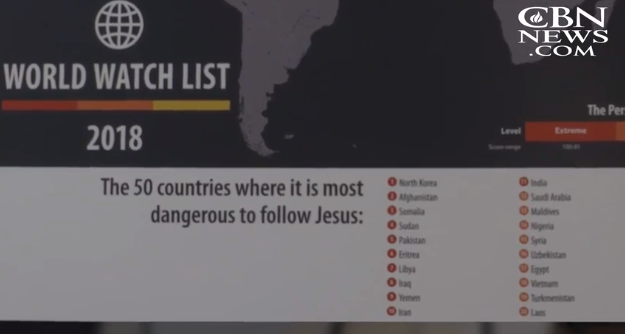 North Korea Tops List of 50 Most Dangerous Countries for Christians
CBN News 01-10-2018
WATCH HERE CBN News Reporter Paul Strand’s report from the Open Doors World Watch List Press Conference Wednesday in Washington.
North Korea is the most dangerous country in the world for Christians.
According to Open Doors USA, some 50,000 Christians are languishing in prison or labor camps for their faith.
Click here to watch the press conference.
“It is illegal to be a Christian in North Korea and Christians are often sent to labor camps or are killed if they are discovered,” Open Doors said on its website.
The findings are part of the 2018 Open Doors World Watch List, an annual ranking of the 50 countries where Christians face the most persecution.
The group released the report in a press conference at the National Press Conference in Washington, DC, today.
North Korea has ranked at the top spot for 16 years in a row.
“Such a ranking is little surprise for the totalitarian regime that controls every aspect of life in the country and forces worship of the Kim family,” said Open Doors President David Curry.

For the first time, Afghanistan came in a close second behind the communist regime.

“Afghanistan and North Korea nearly tied,” Curry said in a statement released by Open Doors. “Never before have the top two countries been so close in incidents. Both countries are extreme in intolerance and outright persecution of Christians in every area.”

Curry says Islamic extremism remains the “dominant driver of persecution, responsible for initiating oppression and conflict in 35 of the 50 countries on the list,” including in Afghanistan.

“This is a tragedy considering the efforts being made by the international community to help rebuild Afghanistan are failing to ensure freedom of religion,” Curry noted. “Reports of violence and human rights atrocities from North Korea are pervasive, while the situation faced by Christians in Afghanistan may be underestimated.”
“It is hard for Westerners to imagine a second country could nearly meet the levels of persecution seen in North Korea, but Afghanistan has reached that level this year,” he added.
Of the top 10 countries where Christians suffer the most for their faith, nine are in majority Muslim nations. Syria and Iraq are in that top tier.
“The fact that ISIS is retreating in Iraq and Syria doesn’t matter,” Curry said. “They don’t need a capital. Their hateful ideology continues to spread. They’re spreading their money, their ideas, and their influence and knowledge of bomb-making and other things.”
For more than 60 years, Open Doors USA, one of the biggest persecution watchdog groups in the world, has documented the “most oppressive and restrictive countries for Christians” hoping to mobilize governments, human rights groups and other NGOs to take notice of the plight of those who suffer for their faith.

Sadly, the levels of persecution against Christians are only rising around the world.

“Unquestionably persecution has grown for the last five years,” Curry said. “More than 215 million Christians worldwide face high levels of persecution for their faith. Nearly one of every 12 Christians in the world today lives in an area, or in a culture, in which Christianity is illegal, forbidden or punished.”
Christian women are especially vulnerable because of their gender and faith.

“One of the things that pops up is the pressure on Christian women on the World Watch List through persecution,” Curry said. “We found 2,260 women who were forced into marriage, who were raped, who had sexual assault by Muslim extremists.  And that is, of course, the most baseline number we can find because so many of these cases go unreported.”

This is the 26th year Open Doors has published the World Watch List.
You can find a link to the full list of countries that are the worst violators of religious freedom here.
“Open Doors monitors the intensity faced by Christians around the world, and the World Watch List quantifies what we see,” Curry said. “This year, as incidents of violence related to persecution have increased – especially those related to women, it is imperative we continue to advocate and call leaders to prioritize issues of religious freedom.”
According to research compiled by Open Doors, the top 10 nations where Christians found it most dangerous and difficult to practice their faith in 2017 were:
1. North Korea
2. Afghanistan
3. Somalia
4. Sudan
5. Pakistan
6. Eritrea
7. Libya
8. Iraq
9. Yemen
10. Iran
Believers in these and other countries across Asia, Africa and the Middle East also face torture, beheadings, rape, and the loss of their homes.

“Open Doors USA is hopeful that all Americans will take notice of the horrific conditions for Christians across the world that are highlighted through the Open Doors World Watch List,” Curry said.

Here are a few of highlights from the 2018 Open Doors World Watch List:
. One in every 12 Christians in the world lives in an area, or in a culture, in which Christianity is illegal, forbidden or punished.
. The countries where persecution increased the most are Egypt, India, Libya, Kazakhstan, Tajikistan and Turkey.
. Nepal and Azerbaijan are newcomers to the list
. Comoros and Tanzania fell off the list.
. Pakistan had the most violence recorded against Christians

Open Doors says the list is a way to highlight the problem and educate the public on the suffering of Christians.
“As Christians, we are called to take a stand for our persecuted brothers and sisters in Christ,” Open Doors USA says on its website. “The Bible calls us to be a voice for the voiceless.”
Love For His People, Inc. founded in 2010 by Steve & Laurie Martin. Charlotte, NC USA