‘God, Thank You’: Alabama Tide Wins College Championship, Led by Faith-Filled Freshman QB Tua Tagovailoa
01-09-2018
CBN News Benjamin Gill
Alabama’s Crimson Tide has won the national college football championship, led to victory by a young man who says everything in life is centered around God, even football.
Freshman Quarterback Tua Tagovailoa led the Tide in a second-half comeback against the Georgia Bulldogs, throwing an amazing 41-yard touchdown pass in overtime for the 26-23 win. Going into the second half, Georgia was leading 13-0. That’s when Alabama replaced its quarterback, putting Tagovailoa in the game. And that’s when their rally began.
The left-handed QB threw two touchdown passes to put Alabama back into the game.
Then the game went into overtime, and Georgia took the lead with a remarkable 51-yard field goal.
Right after that, Georgia sacked Tagovailoa for a 16-yard loss. But he shook it off, and on the next play he connected with freshman wide receiver DeVonta Smith in the end zone to win the championship, giving the Crimson Tide its fifth national championship under Coach Nick Saban.
After the game Tagovailoa offered a simple tweet giving glory to God, saying, “God, thank you.” 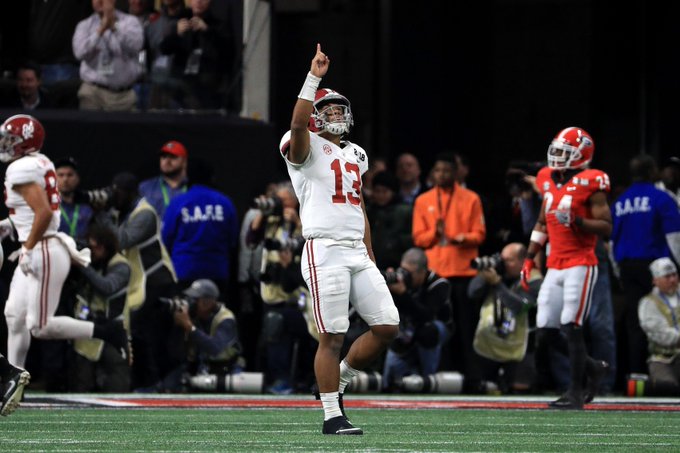 Twitter Ads info and privacy
And his Twitter bio says it all: “1 Corinthians 2:9 • HIM 13EFORE ME”
That Bible verse from Corinthians says: “Eye has not seen, nor ear heard, nor have entered into the heart of man The things which God has prepared for those who love Him.”
Tagovailoa told SB Nation Recruiting last year that his decision to play for Alabama was solely based on the team’s focus on God.

“First and foremost it was their belief in God. Their belief in God was one of the biggest things that kind of struck me, and that kind of lines up with everything in my life,” he said.
Meanwhile, on the Georgia Bulldogs’ side, a gracious note came after the game from quarterback Jake Fromm who has also lived his Christian faith in public:
“God is good, all the time. And all the time, God is good. So thankful for an incredible season with these seniors who have given so much to this university. They’ve set the standard for UGA football and we will be back. Love my teammates and Go Dawgs!”

@FrommJake
God is good, all the time. And all the time, God is good. So thankful for an incredible season with these seniors who have given so much to this university. They’ve set the standard for UGA football and we will be back. Love my teammates and Go Dawgs!