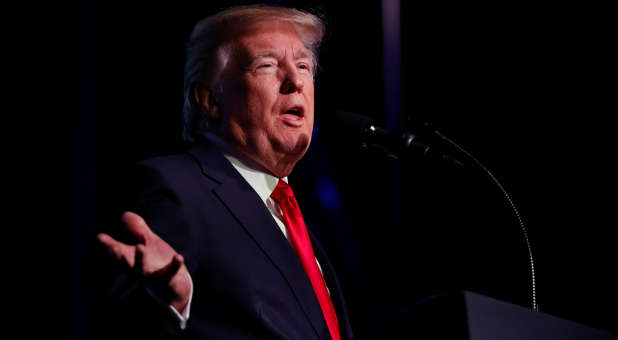 1/9/2018 SHAWN A. AKERS  CHARISMA NEWS
Seventy top evangelical leaders representing millions of evangelicals sent a letter applauding President Donald Trump’s decision last month to recognize Jerusalem as the capital of Israel and to move the U.S. Embassy to Jerusalem.
Leaders like Dr. Jim Garlow, Senior Pastor of Skyline Church in San Diego, praised Trump’s declaration as historic.
“[It] is likely the single most significant pronouncement regarding Israel made by a sitting U.S. president since Harry Truman uttered his famous words supporting Israel on May 14, 1948, at 6:11 p.m. U.S. Eastern Time,” Garlow said.
Tony Perkins, President of Family Research Council, said in a statement that President Trump’s announcement is a “major milestone” in America’s relationship with Israel.
“Under the bold and courageous leadership of President Trump, America is finally putting American interests and the interests of our key allies first,” Perkins said. “America’s foreign policy, as it pertains to Israel, is coming into alignment with this biblical truth: Jerusalem is the eternal and indivisible capital of the Jewish state.”
Pastor Mario Bramnick, president of the Latino Coalition for Israel, says that Trump’s declaration carries heavy spiritual implications.
“In the natural, it was obviously a very important move to confirm what we all know God has established—that Jerusalem is the eternal capital of Israel,” Bramnick said. “The president’s actions have placed U.S. foreign policy in line with the will of the American people, as expressed by the United States Congress in 1995 via the passage of the Jerusalem Embassy Act. This serves as a recognition of both current and historical realities, affirming that Jerusalem has been the capital of the Jewish people and their faith since ancient times.”

“But there are spiritual consequences, and we believe this movement is an incredible blessing for Israel. There is a new open door in the spirit realm. There is a new wave of the Holy Spirit released over our nation and over our president as a result of this major bold move—vis-à-vis Jerusalem.”
Daniel Williams, Executive Director of Israel Allies Foundation says, “Thank you, President Trump, for restoring the historic role of the United States of America by leading the world in recognition of Israel’s right to exist with Jerusalem as is eternal and indivisible capital,” Williams said. “Millions upon millions of people of faith thank you for helping make America great again by standing with Israel.”
President Trump’s immediately drew backlash from the United Nations General Assembly, which voted 128-9, with 35 abstentions, to condemn his declaration. It has also raised the ire of the Palestinian people and the Palestinian Authority.
Garlow prays that the conflict between Israelis and Palestinians will be eradicated and that God’s providence will bring peace and harmony to both sides.
“We, as evangelicals, are also deeply concerned about the plight of the Palestinian people,” Garlow said. “God loves all people equally, including the Palestinians. We are deeply saddened by the abuses of the Palestinian leadership toward its own citizens. It is our hearts’ desire that the Palestinians would be able to live in peace and security alongside their Jewish neighbors.
Shawn A. Akers is a content development editor for Charisma Media.