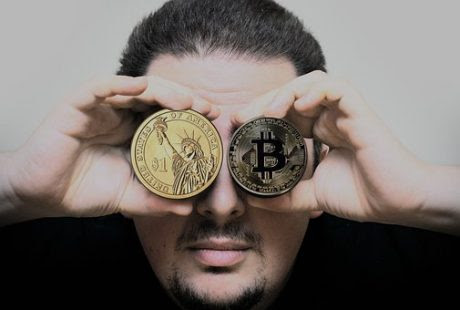 Study Finds That 22 Percent Of Bitcoin Investors Are Using Debt To Fund Their Investments
Posted: 07 Jan 2018 Michael Snyder  THE ECONOMIC COLLAPSE BLOG
Investing in cryptocurrencies such as Bitcoin, Ripple, Ethereum and Litecoin is extremely risky, and experts all over the country are warning that people should only invest what they are willing to lose.  Unfortunately, many are getting swept up in the current euphoria surrounding cryptocurrencies and are not listening to that very sound advice.  A disturbing new survey that was just released found that 22 percent of all Bitcoin investors are either directly or indirectly investing in Bitcoin with borrowed money…

According to LendEDU, a personal loan research firm, more than 18 percent of Bitcoin investors have used borrowed money to trade the cryptocurrency. In a global survey of 672 active Bitcoin investors, researchers asked traders the method they used to fund their cryptocurrency trading accounts. The majority of investors used banking systems such as credit cards and ACH transfers to fund their accounts.
But 22 percent of traders revealed that they have not paid off their credit and debit cards after purchasing Bitcoin, effectively investing in the cryptocurrency with borrowed money.

Credit card debt is one of the most toxic forms of debt that you could ever carry, and investing in anything when you still have credit card balances is extremely unwise.

Yes, cryptocurrencies went on an epic run in 2017, but there is absolutely no guarantee that they will continue to rise in 2018.

In fact, there is a very real possibility that we could see a cryptocurrency crash, and there are many investors that are actually eagerly anticipating one…

Well, as many traders expected, it appears that institutions are using the futures product to slowly but surely build a short position in bitcoin. According to the CFTC Commitment of Traders report (available CBOE futures), non-commercial traders held a net short position of around $30mn as of Tuesday Dec 26, or around half of the total open interest.
Separately, the Traders in Financial Futures breakdown provided by the CFTC show that the leveraged funds category that consists largely of hedge funds and various money managers had a short of around $14mn, or around a quarter of the total open interest.
In other words, spec investors have used the futures contracts to establish Bitcoin shorts.

On the other hand, there is also the possibility that cryptocurrencies such as Bitcoin could continue to defy gravity and soar even higher over the next 12 months.

In fact, a rumor that Amazon.com will soon start accepting Bitcoin has lots of people buzzing…

As a backdrop to all of this, there is a strong rumor that Amazon is about to accept Bitcoin as a method of payment. Patrick Byrne, the CEO of Overstock, has stated that Amazon will soon have no choice but to start accepting it. He is quoted as saying, “… they have to follow suit. I’ll be stunned if they don’t because they can’t just cede that part of the market to us if we are the only main large retail site taking Bitcoin.” Scott Mullins, an Amazon executive has confirmed that Amazon is, “working with financial institutions and crypto-experts to spur innovation, and facilitate frictionless experimentation.”
If the Amazon rumor turns out to be true – Bitcoin will probably go into orbit! Be prepared…

If someone knew exactly what would happen throughout 2018, that individual could make an absolutely obscene amount of money.

Unfortunately I don’t know where cryptocurrencies are heading, but it does appear that things are about to get a whole lot more interesting.  According to Reuters, it looks like you will soon be able to invest in Bitcoin using leveraged ETFs…

The new idea is to build “leveraged” and “inverse” funds that would rise – or fall – twice as fast as the price of bitcoin on a given day.
Direxion Asset Management LLC plans to list such products on Intercontinental Exchange Inc’s NYSE Arca exchange if U.S. securities regulators give the nod, according to a filing by the exchange this week.
In the filing, the exchange said the listing “will enhance competition among market participants, to the benefit of investors and the marketplace.”

So if Bitcoin rises or falls a thousand dollars in a single day, those financial instruments will be designed to move by about twice as much.

That should be fun.

Meanwhile, some are asking what will happen to cryptocurrencies such as Bitcoin, Ripple, Ethereum and Litecoin if the long-awaited collapse of global financial markets finally happens this year.

The question is what will happen to Bitcoin and Cryptocurrencies once the financial collapse takes place. The signs are that when economic circumstances start to deteriorate the price of Bitcoin rises. A prime example of this is during the Cyprus and Greece bailout which saw the price of BTC rise considerably during this period. With banks stopping access to cash in ATM machines, Bitcoin was the perfect solution to be able to store it safely out of the banks and Governments’ hands.
What also happens during a depression is interest rates skyrocket and start to see hyperinflation. This will mean it is extremely hard to get finance from banks and the cost can make it unsustainable. The ICO market is a perfect solution to this problem and as the banking sector suffers, ICOs will boom. More companies will look to these as a cheap way to raise money and will create their own cryptocurrency.

It will be fascinating to see how all of this plays out.

There are some financial experts that believe that Bitcoin is going to zero, and there are others that are absolutely convinced that it is going to a million dollars.

Michael Snyder is a pro-Trump candidate for Congress in Idaho’s First Congressional District, and you can learn how you can get involved in the campaign on his official website. His new book entitled “Living A Life That Really Matters” is available in paperback and for the Kindle on Amazon.com.