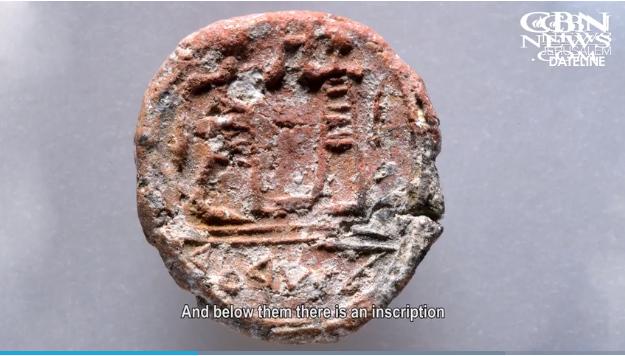 Ancient Jerusalem Artifact Supports Bible, Jewish Presence in City
01-02-2018
CBN News Julie Stahl
Archaeologists excavating in the Western Wall plaza in Jerusalem unearthed what they are describing as a “unique and significant discovery” – a tiny clay “sealing” — that Jerusalem’s mayor says again highlights the 3,000-year Jewish connection to the city.
The artifact is a “stamped piece of clay”, referred to as a “sealing,” from the First Temple period, 1006-586 B.C. It belonged to the “governor of the city” of Jerusalem, which would have been the most prominent local position held in the city 2,700 years ago.
“The Bible mentions two governors of Jerusalem, and this finding thus reveals that such a position was actually held by someone in the city some 2700 years ago,” excavator Dr. Shlomit Weksler-Bdolah said.
Related Prophecy Fulfilled: City of David ‘Shakes Off the Dust’ According to the Israel Antiquities Authority (IAA), the tiny “sealing” is about a half inch wide, a little longer in length and about an eighth of an inch thick. It depicts two figures facing each other and has an inscription in ancient Hebrew script.
Archaeologists don’t know the exact use of the sealing but Weksler-Bdolah believes it was “attached to an important transport and served as some sort of logo, or as a tiny souvenir, which was sent on behalf of the governor of the city.”
“It is likely that one of the buildings in our excavation was the destination of this transport sent by the city governor,” said Weksler-Bdolah.
Finding the “sealing” with such a high-ranking title combined with the large amount of actual seals found earlier in the building, “supports the assumption that this area, located on the western slopes of the western hill of ancient Jerusalem, some 100 meters (yards) west of the Temple Mount, was inhabited by highly ranked officials during the First Temple period,” she noted.
Hebrew University Professor Tallay Ornan and Tel Aviv University Professor Benjamin Sass studied the sealing.  They described the depiction on it as “two standing men, facing each other in a mirror-like manner. Their heads are depicted as large dots, lacking any details. The hands facing outward are dropped down, and the hands facing inward are raised. Each of the figures is wearing a striped, knee-length garment.”
Below a double line is the Hebrew inscription translated, “belonging to the governor of the city.”
“The title ‘governor of the city’ is known from the Bible and from extra-biblical documents, referring to an official appointed by the king,” Ornan and Sass said.
“Governors of Jerusalem are mentioned twice in the Bible: in 2 Kings, Joshua is the governor of the city in the days of Hezekiah, and in 2 Chronicles, Maaseiah is the governor of the city in the days of Josiah,” they said.
The seal was presented to Jerusalem Mayor Nir Barkat recently.  After undergoing scientific examination, it will be on temporary display in the mayor’s office.
“It is very overwhelming to receive greetings from First Temple-period Jerusalem,” Barkat said at the time.
“This shows that already 2700 years ago, Jerusalem, the capital of Israel, was a strong and central city. Jerusalem is one of the most ancient capitals of the world, continually populated by the Jewish people for more than 3000 years,” he said.
“Today we have the privilege to encounter another one of the long chain of persons and leaders that built and developed the city. We are grateful to be living in a city with such a magnificent past, and are obligated to ensure its strength for generations to come,” he added.
Watch here: Video
Love For His People, Inc. founded in 2010 by Steve & Laurie Martin. Charlotte, NC USA