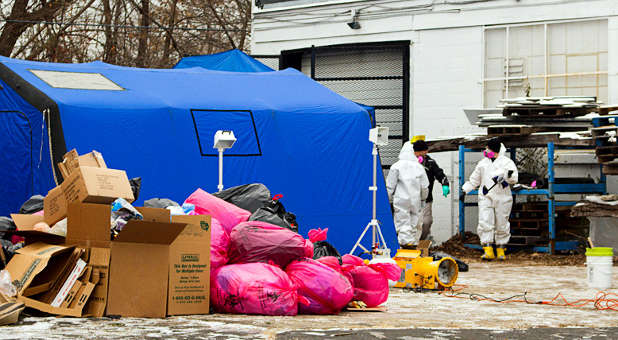 11:30AM EST 12/29/2017 LIBERTY COUNSEL STAFF
Government investigators found four bodies, appearing to be second-trimester infants, preserved in a Detroit cadaver warehouse owned by Arthur Rathburn. The raid was triggered by information showing that he had provided human organs with hepatitis and HIV instead of healthy tissue to paying clients in December 2013, according to Reuters.
Rathburn has pled “not guilty” and is facing trial next month for defrauding both clients and donors.
However, the indictment he is currently facing does not even mention the four prenatal bodies. Nor is it clear where they came from or who he was providing them to. The infants were lifted out of a brownish liquid, which documents indicated “included human brain tissue,” according to Reuters, which included intentionally pixilated pictures because of their graphic nature in the report.
Liberty Counsel is calling for an investigation into how these babies were obtained by Rathburn.
“Rathburn wasn’t running a charity,” said Mat Staver, Founder and Chairman of Liberty Counsel. “It’s possible these were aborted children. It is also very possible that the illegal profiting and trafficking of aborted human organs is much more widespread than the public knows. These four children deserve an investigation, and if they were among other aborted children who were sold for profit, those children deserve justice as well. We must end aborted organ trafficking and the first step is a detailed investigation.”

Some of Rathburn’s bodies were provided by the Biological Resource Center(BRC), which received about 5,000 human bodies, usually those who wished to donate their bodies to science or those too poor to afford burial. Many donors were under the impression that the company would only take skin samples, but in reality, BRC butchered and sold about 20,000 human parts.
Sometimes this included calling widows and pressuring them to amend the consent form to allow military or destructive tests on their loved ones, according to Reuters. Investigators discovered and seized more than 10-tons of human body parts still frozen in the BRC warehouse, which the company fought claiming their value was more than 1 million dollars. However, in total, Reuters’ investigation uncovered more than 1,600 bodies have been “misused, abused or desecrated.”
Two other companies, DV Biologics and DaVinci Biosciences, agreed to settle a lawsuit earlier this month for illegally selling baby body parts supplied by Planned Parenthood to pharmaceutical companies and schools across America as well as 10 countries, making millions of dollars in profit. The companies avoided further investigation and discovery by settling out of court.
The companies were forced to pay $7.785 million, turn over more than $10,000 in laboratory equipment and storage containers, and pay $195,000 in civil penalties. Both companies must cease doing business in California. These companies created catalogs of baby body parts and even ran “specials” to sell to pharmaceutical companies and universities.
For the original article, lc.org.

Charisma Readers save 50% OFF these select Bibles plus FREE SHIPPING plus a Special Bonus for a limited time! Show me the Bibles on sale!
Christmas is coming soon. Get a jump start with these great Spirit-filled bundles. Save up to 70% plus FREE Shipping! Life in the Spirit Gift Boxes, Special Book Bundles, and Christmas Gift Bundles.
FREE GIFT! Download Pastor Bill Johnson’s 40-page mini eBook, The War In Your Head, and unlock your supernatural lifestyle. CLICK HERE
Love For His People, Inc. founded in 2010 by Steve & Laurie Martin. Charlotte, NC USA