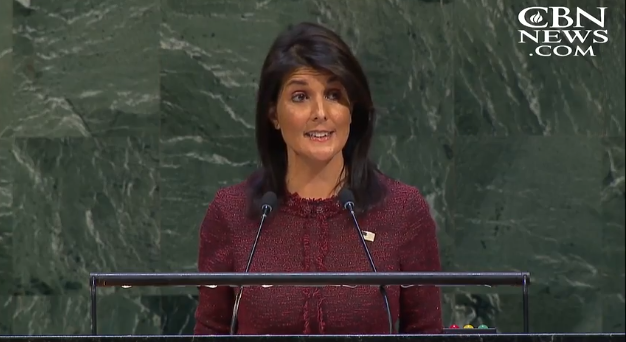 UN Condemns US on Jerusalem, Haley Tells Nations ‘We Will Remember’ This
Dec. 21, 2017 CBN News Jennifer Wishon
The United Nations General Assembly today approved a resolution 128 to 9 calling President Donald Trump’s recognition of Jerusalem as the capital of Israel and plans to move the U.S. embassy there “null and void” — however, it does nothing to change U.S. plans.
The vote comes after U.N. Ambassador Nikki Haley warned member nations she would be “taking names” of those who vote against the United States.
President Trump took it a step further by threatening to cut off U.S. funding to the U.N. The United States is the largest contributor to the international body.
“This is bullying,” said the ambassador from Turkey adding, the “dignity of member states is not for sale.”
Ambassador Haley told the body that the U.S. feeds, clothes and educates desperate people while nurturing and sustaining peace in fragile places throughout the world because it’s a reflection of American values. However, she said, when the U.S. makes generous contributions to the U.N. and the world we expect that goodwill to be respected.
“We will remember it when we are called upon to once again make the world’s largest contribution to the United Nations. And we will remember it when so many countries come calling on us, as they so often do, to pay even more and to use our influence for their benefit,” she said.
President Trump’s decision to recognize Jerusalem as the capital of Israel and move the U.S. embassy there is a reflection of U.S. law dating back to 1995, she said.
“America will put our embassy in Jerusalem. That is what the American people want us to do and it’s the right thing to do,” she added.
“This vote,” she said, “will change the way Americans look at the U.N.”
The Israeli ambassador followed Haley at the podium and called out the hypocrisy of the U.N. He asked why there was no resolution condemning Arab nations for calling for “days of rage” and violence following President Trump’s announcement.
“Those who support today’s resolutions are like puppets pulled by the puppet strings of your Palestinian puppet masters,” he said calling them “blind to the light” and “unaware of the manipulation surrounding you”.
Despite countries calling for support of the Palestinians, the Israeli ambassador pointed out that the resolution will do nothing to give Palestinians the real help they need like jobs.
Other countries that took the podium to speak out against the U.S. and Israel include Iran, China and Venezuela.