After the US vetoed a UN Security Council resolution condemning President Donald Trump’s recognition of Jerusalem as Israel’s capital, the nations of the world vowed to take the matter to the broader General Assembly, where there are no vetoes.
The Trump Admin warned that these nations would do better to keep their mouths shut.
US Ambassador to the UN Nikki Haley (pictured praying at the Western Wall) said that when the General Assembly votes on the resolution on Thursday, Washington “will be taking names” of those countries that vote in favor.
View image on Twitter 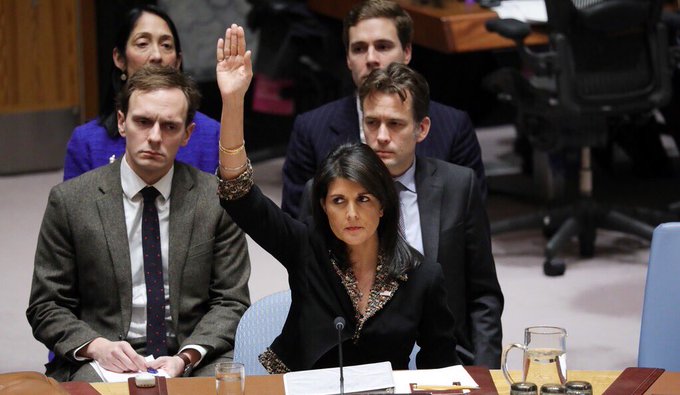 @nikkihaley
At the UN we’re always asked to do more & give more. So, when we make a decision, at the will of the American ppl, abt where to locate OUR embassy, we don’t expect those we’ve helped to target us. On Thurs there’ll be a vote criticizing our choice. The US will be taking names.

Twitter Ads info and privacy
Haley expounded on her threat in a letter sent to several fellow UN ambassadors, which read:
“The president will be watching this vote carefully and has requested I report back on those countries who voted against us. We will take note of each and every vote on this issue.”
After exercising America’s veto power in the Security Council, Trump’s fiery envoy berated the international community for putting forward such a resolution in the first place, calling it an “insult” that “won’t be forgotten.”
The resolution doesn’t call out the United States by name, but rather laments recent changes to an international status quo that has long denied Jewish historical and religious claims to Jerusalem.
The upcoming vote in the General Assembly does not carry the same legal weight as that in the Security Council, but it also can’t be vetoed.
PHOTO: US Ambassador to the UN Nikki Haley prays reverently at the Western Wall during her visit to Jerusalem in June of this year. (Hadas Parush/Flash90)
Want more news from Israel?Click Here to sign up for our FREE daily email updates
Love For His People, Inc. founded in 2010 by Steve & Laurie Martin. Charlotte, NC USA