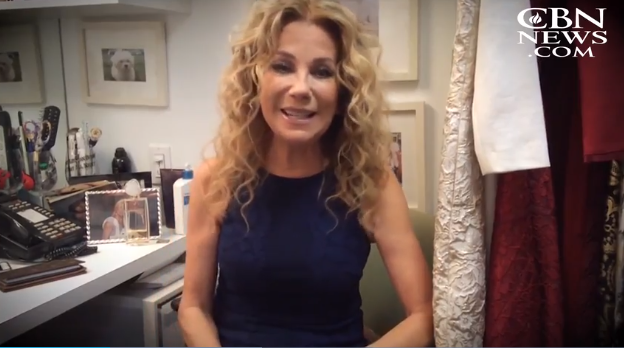 Kathie Lee Gifford & Friends Team Up for Re-Imagined Take on the ‘Miracle’ of David & Goliath
12-18-2017
CBN News Efrem Graham
NEW YORK— Kathie Lee Gifford is an Emmy-Winning co-host of NBC’s Today Show. But she’s enjoyed a more than 40-year career as a host, actress, playwright, author, singer and songwriter.
She also has a rich history with CBN. When I sat down to talk with her recently, I brought something to show her – a clip of Kathie Lee singing on The 700 Club, circa 1976.
“Boy, I used to be able to sing!” she quipped.
Kathie Lee is making new memories, and new music. Her latest project is called “The Little Giant.” It’s a musical telling of the story of David and Goliath.
With a Little Help From Her Friends
She enlisted a few familiar friends to help tell it – including her old friend and co-host of ABC’s “Regis and Kathie Lee,” Regis Philbin.
In the production, Kathie Lee plays the voice of the narrator, “Sheeba the Sheep.” I asked her what inspired her to do this musical rendition of this familiar Old Testament Bible story
The Real Miracle of the David & Goliath Story
“This was a very fun project,” she said. “When I was in Israel in 2012 with my {late} husband, we went to the Valley of Elah, which is where David historically battled Goliath. And it was Frank’s favorite place. He had never been to Israel before. We had a brilliant teaching by Ray Vander Laan about the fact that everybody thinks they know the miracle of David and Goliath is that a little shepherd boy could kill a giant. But the Bible tells us that David had already killed lions and bears. That is what shepherds do. They’ve been trained for it all of their lives. Also David talks about it in the Psalms how he is ‘fearfully and wonderfully made in his mother’s womb.'”
“The Little Giant” is a passion project Kathie Lee wants to see performed and shared in churches and synagogues everywhere for adults and children to enjoy – and, she says, to help children to learn their purpose in life.
“We are asking our children the wrong question, from the minute they are born,” she said. “We always ask our kids, ‘What do you want to be when you grow up?’ The much better question I think is to ask them is what has God already prepared you to do in your life for the Kingdom of God?”
What is Your Stone?
“And so, we realize by this teaching that David was doing everything that God had already prepared him to do,” she continued. “He was the one willing to go down and pick up five stones in the brook of Elah and throw it at the giant. Everyone else in the Israelite army, including King Saul, cowering in fear on top of the Israelite ridge. The miracle of the story of David and Goliath is that David had a relationship with the living God. The others had religion,” she said.
“So, I wrote a song with my friend David Pomerantz about David and Goliath called ‘What Is Your Stone?’ And it goes, ‘what is your stone, where will you throw it? What is your gift, how will you know it? What is the one thing that you can do, that no one else can do but you, what is, what is your stone?'”

I asked Kathie Lee when she recognized what her own stone was.
“I knew it as soon as I could think. I came out of my mother’s womb with a pratfall, Ta-daaaa!”, she joked. “I’ve been a performer my entire life. All my life and probably be performing and writing on the day I die. I want to and I want to be learning something new on that day, too.”
Watch here: Kathie Lee Gifford interview
Love For His People, Inc. founded in 2010 by Steve & Laurie Martin. Charlotte, NC USA