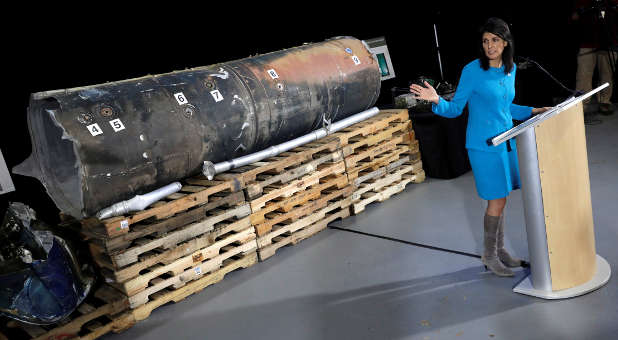 12/15/2017 JENNIFER WISHON/CBN NEWS
America’s ambassador to the United Nations is becoming the Trump administration’s toughest critic on Iran. Now Nikki Haley is demonstrating how recently declassified evidence proves the Islamic Republic is violating U.N. resolutions.
“When you look at this missile, this is terrifying. This is absolutely terrifying,” Haley said standing in a military hanger just outside of Washington in front of a missile fragment she says was manufactured by Iran.
The U.S. ambassador invited reporters to see what she calls evidence of Iran’s reckless and deadly behavior.
“These are the recovered pieces of a missile fired by Houthis militants from Yemen into Saudi Arabia,” she said.
Their target? The airport in Riyadh. A place that processes 10,000 civilian passengers each day.
“The weapons might as well have had “made in Iran” stickers all over it,” Haley said.
Just imagine, she says, if the truck-sized fragments had been aimed at a U.S. airport.
Haley’s move marks the most aggressive U.S. effort to substantiate its claim that Iran funnels weapons to the Houthis … Shiite rebels aligned with Iran that have gained a lot of ground in Yemen.
“It’s hard to find a conflict or a terrorist group in the Middle East that does not have Iran’s fingerprints all over it,” she said.

While many world leaders criticized President Trump for decertifying the Iran nuclear deal, Haley says some are starting to come around.
“Now they actually see the president was right,” the US ambassador said.
Although Iran’s missile-building and exportation of terrorism aren’t covered in the nuclear deal, it does violate a U.N. Security Council resolution and substantiates the fears of those who opposed the nuclear deal.
“Iran has hidden behind the nuclear deal, constantly threatening to get out of it, but these are the things they’re doing while we’re all looking the other way,’ Haley said gesturing to the missile fragment.
Iran called Haley’s evidence “fake and fabricated.” On Twitter, Iran’s foreign minister compared it to that of former U.N. Ambassador Colin Powell’s proof of weapons of mass destruction in Iraq. However, Haley says the U.S. is already building an international coalition around its evidence.
“Everybody has tiptoed around Iran in fear of them getting out of the nuclear deal and they are allowing missiles like this to be fired over to innocent civilians and hurt and that is what has to stop,” she said.
Failing to check Iran now, Haley says, could mean enabling another North Korea in the future.
Reprinted with permission from CBN.com. Copyright The Christian Broadcasting Network, all rights reserved.

Charisma Readers save 50% OFF these select Bibles plus FREE SHIPPING plus a Special Bonus for a limited time! Show me the Bibles on sale!
Christmas is coming soon. Get a jump start with these great Spirit-filled bundles. Save up to 70% plus FREE Shipping! Life in the Spirit Gift Boxes, Special Book Bundles, and Christmas Gift Bundles.
FREE GIFT! Download Pastor Bill Johnson’s 40-page mini eBook, The War In Your Head, and unlock your supernatural lifestyle. CLICK HERE
Love For His People, Inc. founded in 2010 by Steve & Laurie Martin. Charlotte, NC USA