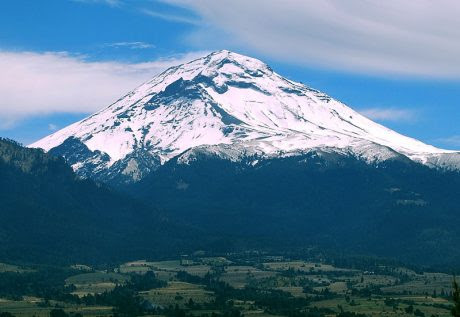 Popocatepetl Violently Erupts, And Authorities Warn A Bigger Eruption Could Threaten More Than 20 Million People In Mexico City
Posted: 13 Nov 2017 Michael Snyder  THE ECONOMIC COLLAPSE BLOG
Mt. Popocatepetl is one of the most important volcanoes on the entire planet, and yet most Americans are not familiar with it.  In ancient Aztec, Popocatepetl means “smoking mountain”, but to the locals the 5,426-meter-high volcano is simply known as “Don Goyo”.  A catastrophic eruption of “Don Goyo” would be a nightmare scenario for the more than 20 million people living in the Mexico City metropolitan area, and that is why authorities are watching Mt. Popocatepetl very closely at the moment.  In fact, we are being warned that the eruption that just took place could be a precursor to an even larger eruption…

Chilling footage showing the violent eruption emerged online amid fears there could be more.
A huge plume of smoke blasted three kilometres in to the air from the summit of Popocatepetl after a series explosions over the course of 24 hours.
Surrounding towns were blanketed with ash and debris and authorities are now warning a bigger eruption could threaten the 23.6million inhabitants in the Mexican capital, located just 35 miles (56km) away.

This latest eruption actually resulted in what is known as a “volcanotectonic earthquake”.  Such quakes are caused by the movement of magma, and scientists are very concerned about what that might mean.

“Don Goyo” has been spewing ash regularly since early this month, and at this point local residents are being told to remain indoors…

Locals have been warned to avoid outdoor activities and to keep doors and windows shut, and it is not yet clear when they can leave their homes.
It has been emitting ash since the beginning of the month, reports suggest, before a string of explosions.

Of course the activity at Mt. Popocatepetl has been ramping up for quite a while.  Back on September 19th, a magnitude 7.1 earthquake that affected Mexico City also triggered a minor eruption of the volcano.

But minor eruptions can be handled.  What we want to avoid is the kind of catastrophic eruption that has given Popocatepetl legendary status.  In fact, we are told that at one time enormous mud flows from the volcano buried entire Aztec cities…

Historians tell us that Popocatepetl had a dramatic impact on the ancient Aztecs. Giant mud flows produced by massive eruptions covered entire Aztec cities. In fact, some of these mud flows were so large that they buried entire pyramids in super-heated mud.
But we haven’t witnessed anything like that in any of our lifetimes, so it is hard to even imagine devastation of that magnitude.
In addition to Mexico City’s mammoth population, there are millions of others that live in the surrounding region. Overall, there are about 25 million people that live in the immediate vicinity of Popocatepetl. Thankfully, we haven’t seen a major eruption of the volcano in modern times, but at some point that will change.

Our planet is becoming increasingly unstable, and the magnitude 7.3 earthquake that just hit Iraq is yet more evidence of this fact.

A catastrophic eruption of Mt. Popocatepetl would be a disaster unlike anything North America has seen in centuries, and it would almost instantly collapse Mexico’s economy.
This isn’t getting a lot of attention from the mainstream media in the United States, but this is a major story.

Great shaking is taking place all along the “Ring of Fire”, and that potentially has dramatic implications for people living all over the globe – including the west coast of the United States.