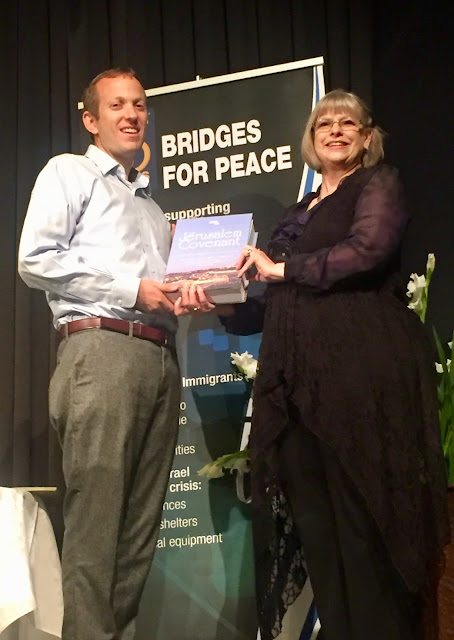 Bridges for Peace President Receives Jerusalem Covenant Award
Rev. Rebecca J. Brimmer ‘has worked tirelessly to build relationships between Christians and Jews in Israel and around the world’
November 7, 2017 ——- Rev. Rebecca J. Brimmer, International President and CEO of Bridges for Peace (BFP), last week received the Jerusalem Covenant Award from Israel365. The award was presented, along with a commemorative copy of the “Jerusalem Covenant” book, which contains the signatures of more than 150,000 Christian Zionists proclaiming they believe Jerusalem should be the eternal capital of the Jewish people and state.
The Jerusalem Covenant was bestowed on Nov. 2, as part of BFP and Israel365’s Balfour Day conference: “From Balfour to Nikki Haley: 100 Years of Christian Zionist Diplomacy.”  Close to 200 people attended the event, which was meant to train BFP’s top international leadership to be ambassadors for Israel.
The “Jerusalem Covenant” was originally composed by Supreme Court justice Menachem Elon upon the 25th anniversary of Jerusalem Day in 1992 and rests today in the Knesset. Israel365 has collected over 150,000 signatures onto the Jerusalem Covenant from more than 100 nations, from Albania to Zimbabwe.
“As the head of Bridges for Peace, Becky has worked tirelessly and with a whole heart to build relationships between Christians and Jews in Israel and around the world,” Israel365 Founder and CEO Rabbi Tuly Weisz said. “Becky is an ideal representative to share this special edition of the Jerusalem Covenant, which represents a powerful display of international solidarity between the Biblical city of Jerusalem and the world.”
The last Jerusalem Covenant award was given to Deputy Minister Michael Oren by Israel365 on Jerusalem Day.
For more information: Maayan Hoffman, VP of Publishing and Audience Strategy, 972-50-718-9742 or maayan@israel365.com.
Love For His People, Inc. founded in 2010 by Steve & Laurie Martin. Charlotte, NC USA