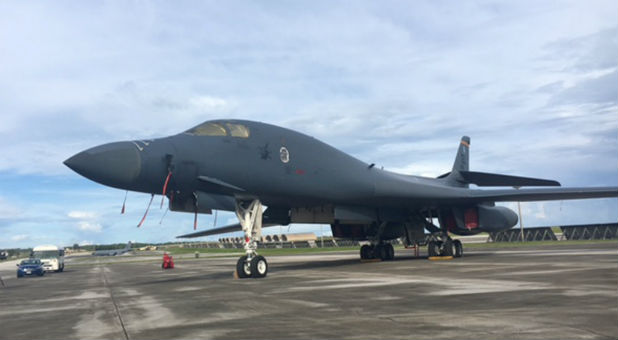 Is the Air Force Done With People of Faith?
10/24/2017 TRAVIS WEBER /FRC  CHARISMA NEWS
Is it really possible that the Air Force no longer has room for people of faith? Based on the matter of Col. Bohannon, that may sadly be the case.
Leland Bohannon is a decorated colonel who has devoted decades of his life to serving our Air Force, including flying missions in the B-2 stealth bomber. He’s been ranked first on his performance reports, has been bestowed numerous honors, and trusted with oversight of nuclear weapons. In other words, he’s the model Air Force officer.
Yet Colonel Bohannon’s career may be flushed down the drain by the Air Force simply because of a subordinate who wanted approval of a same-sex marriage. When he was handed several awards and certificates to sign for the subordinate’s retirement ceremony, Colonel Bohannon signed all of them except a “certificate of spouse appreciation”—which he couldn’t in good conscience sign because the certificate was for a spouse of the same sex. He sought advice about what to do from his chaplain and attorney; the chaplain told him to ask for a religious accommodation. He submitted one but it was returned six weeks later “without action.” In the meantime, a major general offered to sign the certificate instead, and it was signed and presented to the subordinate. Yet when the subordinate saw that Colonel Bohannon was not the signatory, he filed an Equal Opportunity complaint against him, alleging discrimination on the basis of sexual orientation.
The EO investigator found that Col Bohannon violated Air Force regulations and “unlawfully discriminated against the MSgt based on sexual orientation.” The EO investigator recognized that a religious accommodation had been sought, but claimed that “even had the accommodation been granted, Col Bohannon would nonetheless be guilty of unlawful discrimination.”
As a result, his superior “suspended Col Bohannon from command, withheld his decoration, and submitted a letter to the Air Force Brigadier General promotion board—the rank for which Col Bohannon is eligible—recommending that Col Bohannon not be promoted.”

Not only is this entire side-show an absurd waste of time, it is clearly unlawful and unconstitutional. The EO investigator is apparently ignorant of the law in this area; if a religious accommodation is granted, that means by definition that he’s not “guilty of unlawful discrimination”—because he’s been granted an accommodation. Moreover, religious freedom law and military policy demand that he be granted an accommodation in an instance like this—where the objective is easily fulfilled with another signature on the certificate.
At best, this entire matter is a distraction for Colonel Bohannon. At worst, it could end his career. That’s the track this train is currently proceeding on.
Thankfully, our friends at First Liberty are on the case, and those in the media like Todd Starnes are calling attention to this. Let us hope the Air Force fixes the issue before the entire situation is derailed and the military environment only grows more toxic for people of faith.

Travis S. Weber is the Director of the Center for Religious Liberty at the Family Research Council, where he focuses on a variety of legal and policy issues pertaining to religious freedom. This article originally appeared on the Family Research Council Blog.
Readers are Leaders! Subscribe now and get 3 magazines for the price of 1. Get Charisma, Ministry Today and SpiritLed Woman all for $24. YES – Sign me up!
3 Reasons Why you should read Life in the Spirit. 1) Get to know the Holy Spirit. 2) Learn to enter God’s presence 3) Hear God’s voice clearly! Click here to draw closer to God!
Love For His People, Inc. founded in 2010 by Steve & Laurie Martin. Charlotte, NC USA