The Famine and the Harvest

10/22/2017 PAT AND KAREN SCHATZLINE  CHARISMA NEWS
The prophet Amos was an old shepherd farmer who lived at a time when people were satisfied with the status quo. He was a contemporary of many of the Old Testament’s major prophets, who lived 700 years before Jesus. Amos was from the southern kingdom of Judah, but he preached to the northern kingdom. The northern kingdom had wealth and prosperity, which led them to become resistant to a holy lifestyle. The people had cast off all restraint and had no desire to make sacrifices to God. Their altars were broken down. Amos says they were like a basket of fruit that was easily destroyed. It was a dark time in the history of God’s people, and Amos saw destruction coming. He prophesied a shaking in the land.
“The time is coming,” says the Lord God, when I will send a famine on the land, not a famine of bread ,nor a thirst for water, but of hearing the words of the Lord” (Amos 8:11).
Does this sound familiar? It does to us. We are living in the kind of desperate times in America. As the prophet Amos said, we are in a famine of hearing the word of the Lord. Once again God’s people are in need of voices of truth to arise and declare His holy precepts over our land. The worst thing that could happen to our nation would be for God to turn us over to ourselves. I believe we are very close to that happening unless we are willing to let the famine compel us to build an altar once again.
Amos saw God standing at the altar bringing forth judgment (see Amos 9:1). Because there was a famine in the people’s hearts of the word of the Lord; calamity was coming. Satisfying their selfish desires had displaced their hunger for God. But God did not want to leave His people in this place of calamity. Through Amos, God spoke of the restoration of His house, the tabernacle of David (see Amos 9:11-15). (As it happens, part of this word spoken through Amos was read in Israel’s synagogues on the day in 1948 when they once again became a nation).
In the darkest and most trying times God will show His greatness. Throughout history we see Him coming in power when the righteous cry out. In the worst moments of drought God’s mighty arm will reach out for us, even though we tend to ignore Him in the good times and blame Him for the bad. Too often, we build our theology out of our pain and fail to realize that God always has a good plan for us. In the midst of our drought He will call us to the altar. If we come, God will meet us there and bring the rain of His Holy Spirit. When His rain comes, it will water the fields so they fill with crops. And when the harvest is ready, God will raise up the workers to bring it into the storehouse of heaven.
This is a powerful biblical pattern revealed to us in Scripture that gives us strategy for the times we are in, and it consists of four stages. Stage one is drought, stage two is the altar, stage three is the rain and stage four is the harvest.
I want to examine these four stages of God’s powerful pattern for revival because I believe we can learn much from them that will help us in the times we are in now.
Stage One: The Drought. America is in a drought of truth, and it is not a pretty picture. Here are a few of the many reasons: We have embraced wrong over right: the lie that tolerance is only tolerance when it is celebrating perversion, race profiteers are calling for and leading riots in the streets, children are encouraged to choose their own gender and women dressed in pink march in the streets by the thousands declaring their right to kill the unborn.
During times of crisis, the church has almost always served as a moral compass. It was the church that stood up against abortion. It was the church that for biblical marriage, fought against racism in many parts of the country, and decried injustice against Israel and helped them to become a nation in 1948. The church has been a moral compass many times, but today, it seems Christian leaders take great pains to avoid controversy, even if that means not proclaiming God’s Word.

We are living in a time when worship is loud, the lights are captivating and the speakers are celebrated for their silence, all while truth is diminishing. Yet people are looking for answers. We are in a drought of truth, and there is a desert of dehydrated believers all around us. This has created a famine in the land for the word of the Lord, and there is only one thing for us to do. We must have a spiritual and moral revolution to reawaken this once-great nation.
Stage Two: The Altar. Over and over in God’s Word, when devastation and destruction overwhelm a nation or a kingdom, the people build an altar. Who will rebuild God’s holy altar amid the rubble of lost holiness and morality? Too many of today’s leaders are so busy implementing the latest church-growth strategies that they are ignoring their own spiritual growth. The people of God must remember that they are His ambassadors, called to deliver His message of hope and healing.
Stage Three: The Rain. If we are willing to build an altar, God will respond. He will bring His fire and His rain (see 1 Kings 18:36-45). Right now God is bringing a great rain across the globe. Now more than ever, we are hearing whispers of revival coming from the four corners of the earth. Many times these outbreaks of God go unnoticed because they are not induced by the Western church or led by a well-known person. Outbreaks of the Holy Spirit are taking place in house churches, caves and hamlets where God is allowed to move at will and the people are begging for his presence.
Stage Four: The Harvest. We can clearly see the pattern in 1 Kings 18 of the famine, the altar and the rain. Then after the rain comes the harvest, which means it is time for the harvesters to come forth.
Is God calling you to bring in the harvest? Is He calling you to catch the mantle of this generation of altar builders and bring in the souls just waiting to be reached after God sends the rains of revival? Maybe this is your passion, and you’ve been in a waiting season for what seemed like forever. Know this: You have been hidden for a reason and prepared for a purpose (see Gal. 6:9; John 4:35; Luke 20:2). 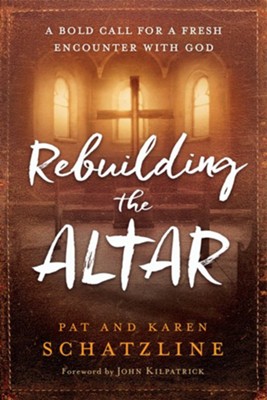 Adapted from Rebuilding the Altar by Pat and Karen Schatzline, copyright 2017, published by Charisma House-Charisma Media/Charisma House Book Group. If you are longing for a closer walk with God and be used to accomplish His purposes, this book is for you. The authors show you how to rebuild your personal altar and encounter God as never before. To order your copy, click on this link
Prayer Power for Week Beginning Oct. 15, 2017:
This week, as you surrender everything to God and seek His face at the altar, continue praying for world-wide revival and for it to explode in our own nation. Remember those victimized by terrorism, natural disasters and wildfires. Ask God what He wants you to do to be His ambassador during these dark times. Continue to pray for Israel, our allies, our leaders, military and first responders. (Read Gal. 6:9; John 4:35; Luke 20:2).