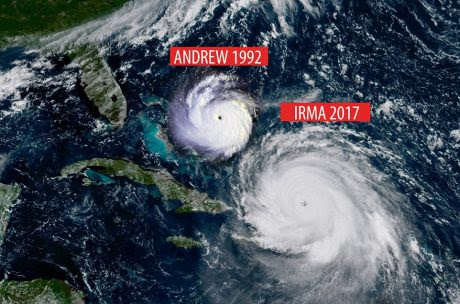 Hurricane Irma Is Being Called ‘A Lawnmower From The Sky’ And FEMA Warns It Will ‘Devastate’ The Southeast
Posted: 08 Sep 2017  Michael Snyder  THE ECONOMIC COLLAPSE BLOG
It looks like Hurricane Irma is going to make landfall in south Florida on Sunday morning.  Of course that could still change, but this is what the meteorologists are telling us at this point.  But of course the exact spot where Irma makes landfall is not so important because of the absolutely immense size of this storm.  Irma is going to cause chaos and devastation over a very large area, and just like Hurricane Harvey the recovery from this storm is literally going to be measured in years.

Witnesses described similar scenes on the island’s Dutch half. “It’s like someone with a lawnmower from the sky has gone over the island,” said Mairlou Rohan, a European tourist visiting Sint Maarten, part of the Netherlands.

That is not the sort of terminology that I would use, but without a doubt the devastation caused by this storm has been off the charts.

On Barbuda, at least 90 percent of the buildings have been destroyed…

Gaston Browne, the prime minister of Antigua and Barbuda, said Barbuda was “totally demolished,” with 90% of its buildings destroyed. Communication with the island was cut off because of the destruction. As Hurricane Jose approaches the island, Barbuda officials are trying to evacuate the entire population of 1,800.

Now the storm is heading straight for south Florida, and FEMA is using apocalyptic language to describe what might happen…

Some are comparing Hurricane Irma to Hurricane Andrew, but the truth is that Irma is much, much larger.  You can see a comparison of the two storms right here.

At this point, scientists are running out of superlatives to describe this storm.  At the National Hurricane Center, one expert is already labeling Irma as “the most infamous in Atlantic hurricane history”…

“Irma has me sick to my stomach,” said Eric Blake, a scientist with the National Hurricane Center, on his personal Twitter account on Thursday evening. “This hurricane is as serious as any I have seen. No hype, just the hard facts. Take every lifesaving precaution you can.”
“I have little doubt Irma will go down as one of the most infamous in Atlantic hurricane history,”he added.

We shall see what happens over the next few days.

Hopefully things will not be quite as bad as the experts are projecting.

At this hour, thousands upon thousands of Florida residents are desperately trying to flee north on the highways.  Unfortunately, a lot of gas stations are already completely out of gasoline, and it is getting worse by the hour.  Just check out these numbers…

In Gainesville, it was the worst: At least 58% of stations were out of gasoline as of Friday morning, according to GasBuddy’s fuel tracker.
More than 40% of stations in West Palm Beach and Miami had no fuel, while 38% of Fort Myers-Naples stations, nearly 35% of Tampa-St. Petersburg locations and more than 32% of Orlando stations were offline.

At the stations where gasoline is still available, some people are having to wait up to 90 mins for fuel.

Of course there are others that are not planning to leave Florida at all.  In fact, 82-year-old Joseph “Tony” Vincent told the Washington Post that he is quite content to ride the storm out at a local hotel…

“Hell, you’d be safer here than taking a car on those roads. You might be killed before you get to Atlanta,” he scoffed.
If Irma fizzles, Vincent said he’ll just ride his three wheeler back to his trailer. “I’ll come on home and get drinker than hell,” he said.

Hopefully he will be okay.

The warnings have been issued, and I don’t think that they could have been much stronger.  People have made their decisions about what they are going to do, and now we will see how things play out.

On another note, I had to smile today when I came across a Think Progress article entitled “The case for a Category 6 rating for super-hurricanes like Irma”.  I have been heavily criticized for saying the exact same thing that the liberal media is now talking very heavily about, but of course those outlets will not receive the same sort of criticism that I did.

In the end, the main thing is keeping people safe, and if anyone in the direct path of this storm still feels like they want to “ride it out”, I would very much encourage you to flee while you still can.

This is an exceedingly dangerous storm, and you do not want to be there when it hits.
Michael Snyder is a Republican candidate for Congress in Idaho’s First Congressional District, and you can learn how you can get involved in the campaign on his official website. His new book entitled “Living A Life That Really Matters” is available in paperback and for the Kindle on Amazon.com.