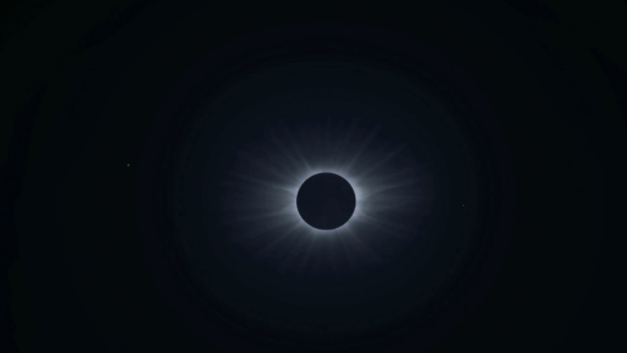 Signs in the Heavens: Biblical Darkness, the Solar Eclipse, and the End Times
Aug. 21, 2017 – CBN News Julie Stahl, Chris Mitchell
+2
AYALON VALLEY
– Many Americans are anticipating Monday’s eclipse and wondering just what it means. It won’t be visible in Israel, but the Bible records several times when dramatic signs involving the sun took place in this area. The question is can we expect to see such signs today?
One of the 10 plagues over Egypt before the exodus of the Israelites was three days of darkness (Exodus 10:21-29). ‘Keep Your Eyes on Jesus,’ Not the Eclipse Does the Eclipse Herald ‘Signs in the Heavens?’ The Coming Solar Eclipse: What the Bible Tells Us About This Phenomenon

“The Jewish sources describe it not just as darkness, but a darkness that was so thick it’s like, people couldn’t move in it or the Egyptians couldn’t move in it. So that’s an example of God suspending the laws of nature,” Rabbi and historian Ken Spiro told CBN News.
“The sun god was one of their [the Egyptian’s] major gods, the major god, I think, so by God covering their god, He was saying, I’m bigger than your god. And that was presumably one of the signs behind that one,” said Stephen Bridge, director of the Garden Tomb in Jerusalem. Garden Tomb Director Stephen Bridge
Many historians believe the valley of Ayalon is where Joshua battled the five Amorite kings, when he said to the Lord, “‘Sun stand still over Gibeon and moon over the valley of Ayalon’ so the sun stood still, and the moon stopped, til the people had revenge upon their enemies.” (Joshua 10:12) The Bible tells us three hours of darkness fell at Jesus’ crucifixion/ (Matthew 27:45)
“Whatever the darkness was it wasn’t an eclipse and we have no explanation of what it was or even what it meant, but it certainly would have invoked in the people who were there a profound sense of something monumental happening, which indeed it was,” said Bridge.
God definitely made points with signs in the sky throughout the Bible. But is He still doing the same thing today?
Michael Mott, who serves as assistant pastor with Jerusalem’s King of Kings congregation, and Rabbi Spiro say “yes.” Pastor Michael Mott, assistant pastor of Jerusalem’s King of Kings Congregation
“He uses nature all the time in different ways to communicate,” Mott told CBN News. “In Romans chapter one, it tells us that God has ordered the world in such a way that the hearts of man can know that God exists just by the way nature works all the time. So does He use nature to talk to His people?  He does.”
Spiro said, “It’s a fundamental belief in Judaism that everything that happens in the world is for a meaning and there’s a message hidden in there somewhere, even in astronomical phenomenon. So interpreting the message is, of course, a little more problematic.”
Bridge believes God already gave mankind His greatest sign.
“I think that some of that depends on our own personality – and I’m not downplaying that – but the biggest way God speaks is through His Son. So the writer to the Hebrews draws that out: ‘In former times God spoke in many and various ways through the prophets, but in the last days he’s spoken through His Son.’ And so for us that Jesus is the revelation, Jesus is the Word made flesh; Jesus is the ultimate sign and His death and resurrection, the ultimate sign of that. So we should be looking to Him.”
Spiro says Judaism is looking at actual events today as signs of the end of days – not so much signs in the sky. Rabbi Ken Spiro
“The rabbis always talk about the coming of the Messiah as a woman giving birth – birth pangs, and the basic idea behind that is just as a woman giving birth goes into contractions [and as] they get closer and closer together, they get more and more intense as you approach the birth,” he continued.
“So too events on the planet earth will get more and more intense and happen much more rapidly and certainly I would say we see that things are speeding up very dramatically in the world, the change that is taking place, the political upheaval, the technological advances, as to whether that is linked to astronomical events that are coming, we’ll only know at that time,” he said.
The Book of Joel includes an often-quoted end time prophecy about the sky.
“The sun shall be turned into darkness and the moon into blood before the great and awesome day of the Lord.” (Joel 2:31) “We get this picture from God’s word that He will use those kinds of signs in the skies to speak to His people, to speak to the earth,” Spiro said. “And how do we know which one is which because I think sometimes we want to attach God to every single natural event that takes place and I think that most of the time God just wants to show that He is in nature and not that He’s communicating ‘watch out something is getting ready to happen.'”
“Now, that could be interpreted as eclipses by the way,” he added. “You know, the moon turning to blood is called the blood moon actually, which is what happens in a lunar eclipse and … when you have a solar eclipse, the sun disappears and turns to blackness. So there in the prophets it’s talking about signs we see at the end of days.  Whether that is what it’s meant to be interpreted as remains a big question. We don’t know.”
According to Jewish teaching, the Messiah will come before the year 6,000 on the Hebrew calendar. We’re currently at 5777. If each day is like a thousand years, Spiro says we’re about at late Friday afternoon, meaning we’re getting very close.
“We could be hitting that end of days’ scenario,” he said. “Certainly time is definitely running out, and as we see by looking at what’s going on in the world, in a positive and a negative way – I mean the rebirth of the State of Israel, the reunification of Jerusalem. We just celebrated the 50th anniversary of that. I mean that’s unbelievable, that’s prophecy coming true before our eyes: the nations of the world lining up against Israel, largely what you see going on in UNESCO, the United Nations, is clearly a sign.” So, other than looking through protective glasses, how do these leaders recommend we view the eclipse?
“We’re only a few headlines away from direct convergence of that biblical end of days scenario with the headlines in the news today and that to me – and I think to most Jews – is far more impactful and serious in terms of waking people up in their expectations of like the redemption than celestial signs happening up above in the heavens,” the rabbi said.
“We need to prepare our hearts and continue to ask God to show us, is this you?” Mott said. “Is this you who are you speaking to your people? Are you speaking to the earth? And I believe that he’ll tell more than just one person that this is Him speaking to the whole earth.”
“We just need to be cautious, fix our eyes on Jesus, hold firmly to scripture and keep proclaiming the mystery and the profound victory of the life, death and resurrection of Jesus the Messiah,” Bridge said.

Watch here: Signs in the Heavens

While you are here…
We’d like to ask for your help. At CBN News, we strive to bring you the most current, pertinent and reliable news possible. We are able to bring you this important news from a Christian perspective because of the help of friends like you who know how vital it is to have an alternative to the news you hear from major media outlets.
Would you help ensure that we can continue to provide this important service to you and our country by considering a special gift today? Or would you become a monthly partner so we know we can count on the resources we need to bring you the best news possible?
Thanks for being a part of the dynamic future of CBN News, as well as helping The Christian Broadcasting Network share the love of Jesus with hurting people everywhere.