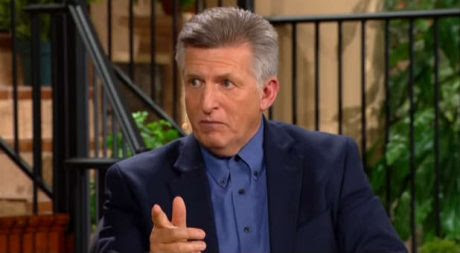 Rick Wiles Issues An Extremely Ominous Warning: “The Alarms Are Ringing Again”
Posted: 15 Aug 2017  Michael Snyder  THE ECONOMIC COLLAPSE BLOG
What you are about to read is going to absolutely shock you.  Rick Wiles has done outstanding work over at TruNews for well over a decade, and now just days before the August 21st solar eclipse he has issued his most ominous warning ever.  His warning is not directly related to the eclipse, but I find it extremely interesting that it is coming at approximately the same time, because many consider the eclipse itself to be some sort of warning.

I was a TruNews listener way before I ever started The Economic Collapse Blog, and I know Rick’s track record.  So I would take what follows very, very seriously.

In 1998, a very unusual series of events resulted in Rick meeting a wonderful Christian lady named Leah Mandell at a conference.  Three years later, Leah made a very strange phone call to Rick on August 11th, 2001, which was precisely one month before the 9/11 attacks.  When Rick answered his phone, Leah began telling him that “the alarms are ringing”…

She said, “Rick, something very odd is happening today. Alarm bells, everywhere I go today there are alarms ringing, car alarms, burglar alarms, fire alarms, even oven alarms, every place I go, I hear alarms ringing. What’s really strange is people are having trouble turning the alarms off. I go into stores, the alarm is ringing. I go into an office, the alarm is ringing. And they can’t get the things to turn off. The Lord told me, ‘Call Rick Wiles and tell him, “The alarms are ringing, and this time, they will not be turned off.”’”
The moment she said that, Rick’s seatbelt alarm started ringing even though his seatbelt was fastened.
One month later was September 11, 2001.

Exactly 16 years later, on August 11th, 2017, Leah called Rick again.  She called to tell him that “the alarms are ringing” again and that she was seeing dead birds fall out of the sky everywhere…

Three days ago on August 11 2017, Rick was driving to his church when suddenly a dead bird fell from the sky and smashed into his windshield. The bird did not fly into his path, but fell out of the sky like it was already dead. Then he received a phone call from Leah Mandell saying, “Rick, the alarms are ringing. Everywhere I go today, alarms are ringing. And there’s something else, dead birds. I’m seeing dead birds. It seems like everywhere I go, there’s a dead bird.”
Then he realized the date was August 11, the same date when Leah had called him sixteen years earlier with a similar warning.

You can dismiss this if you want, but how are you going to explain away what happened 16 years ago?

I don’t know what all of this could mean, but I am definitely concerned about all of the pivotal events that are going to happen over a 40 day period beginning with the solar eclipse on August 21st.  Many believe that a turning point for America is right around the corner, and without a doubt the mood of the nation is turning quite sour.

Anger and frustration are growing everywhere you look, and it isn’t going to take much to cause a major explosion.

Earlier today, I came across a New Yorker article entitled “Is America Headed for a New Kind of Civil War?”  In that article, it was revealed that many top national security experts believe that there is a significant chance that civil war will erupt in the United States within the next 10 to 15 years…

America’s stability is increasingly an undercurrent in political discourse. Earlier this year, I began a conversation with Keith Mines about America’s turmoil. Mines has spent his career—in the U.S. Army Special Forces, the United Nations, and now the State Department—navigating civil wars in other countries, including Afghanistan, Colombia, El Salvador, Iraq, Somalia, and Sudan. He returned to Washington after sixteen years to find conditions that he had seen nurture conflict abroad now visible at home. It haunts him. In March, Mines was one of several national-security experts whom Foreign Policy asked to evaluate the risks of a second civil war—with percentages. Mines concluded that the United States faces a sixty-percent chance of civil war over the next ten to fifteen years. Other experts’ predictions ranged from five per cent to ninety-five per cent. The sobering consensus was thirty-five percent. And that was five months before Charlottesville.

I found this to be absolutely fascinating, because I have been repeatedly warning about the exact same thing.

Just look at what is happening today even though the economy is still relatively stable.  Once we get to the point where unemployment is rampant and millions of people don’t know where their next meal is coming from, chaos and violence are going to spiral completely out of control.

On Saturday and Sunday, Pastor Benjamin Faircloth and I are going to be jointly ministering at the “What’s Next Prophecy Conference” at his church in Lavonia.  One of the phrases that has been coming up in my heart over and over again in recent weeks is this – “If America Does Not Turn Back To God, There Isn’t Going To Be An America”.  This is one of the reasons why the ominous warning that Rick Wiles just issued immediately got my attention.  I believe that we are entering very troubled times, and yet most Americans appear to be completely oblivious to what is about to happen.

You can hear Rick Wiles talk about his recent phone call with Leah Mandell right here.  I am so thankful for Rick and my other friends over at TruNews.  They are good people, and they often report things that nobody else will.

Yes, I understand that some of you may think that this article has been a bit unusual.  But the truth is that we are living in very strange times and they are getting stranger by the day.
As I always say, let us hope for the best, but let us also get prepared for the worst.