Hundreds of torch-wielding white supremacists marched through the University of Virginia campus, chanting racist slogans and clashing with a small group of counter-demonstrators.
Get The Times of Israel’s Daily Edition by email
and never miss our top stories   FREE SIGN UP!
In videos of the march, which lasted about 20 minutes late Friday, the far-right activists can be seen using the torches and ropes to beat the counter-demonstrators next to a statue of Thomas Jefferson.
Many of them chanted “White lives matter!” “You will not replace us!” and “Jews will not replace us!”
Several can also be seen giving the Nazi salute and using the Nazi slogan “blood and soil.”
Police intervened after some of the demonstrators were sprayed with tear gas. The march came on the eve of a larger planned gathering of far right and white supremacist groups in the university town of Charlottesville.
The National Guard has been put on alert because of the risk of violence during Saturday’s “Unite the Right” rally. Counter demonstrators are also expected.
“I want to urge my fellow Virginians who may consider joining either in support or opposition to the planned rally to make alternative plans,” Governor Terry McAuliffe said in a statement.
Thousands of white nationalists, including supporters of the Ku Klux Klan white supremacist group, and anti-fascist activists are expected to turn out in Charlottesville, a sleepy town planning to remove a statue of General Robert E. Lee, who led Confederate forces in the US Civil War.
“The Charlottesville event could be a potentially historic showcase of hate, bringing together more extremists in one place than we have seen in at least a decade,” said Oren Segal, director of the Center on Extremism at the Anti-Defamation League, a group that monitors and combats anti-Semitism. 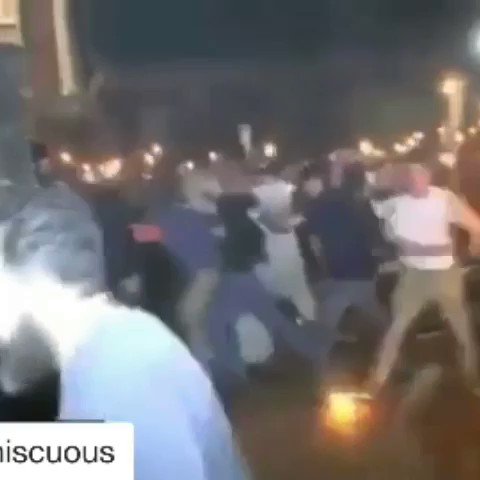 Twitter Ads info and privacy
McAuliffe, a Democrat, said many of the people at the rally will “express viewpoints many people, including me, find abhorrent. As long as that expression is peaceful, that is their right.”
He said he had given security forces instructions to act quickly and decisively if violence breaks out.

Officers clash with counter protesters after the Ku Klux Klan staged a protest on July 8, 2017 in Charlottesville, Virginia. (Chet Strange/Getty Images/AFP)
Units of the Virginia National Guard will be placed on stand-by, he added.
On July 8, a few dozen Ku Klux Klan marchers gathered in Charlottesville to protest plans to remove the statue of Lee. But they were outnumbered by hundreds of jeering counter protestors.
This time the extreme right hopes to have a stronger showing thanks to the presence of various leaders of the “alt-right” movement that has been emboldened by Donald Trump’s ascent to the White House.
Love For His People, Inc. founded in 2010 by Steve & Laurie Martin. Charlotte, NC USA