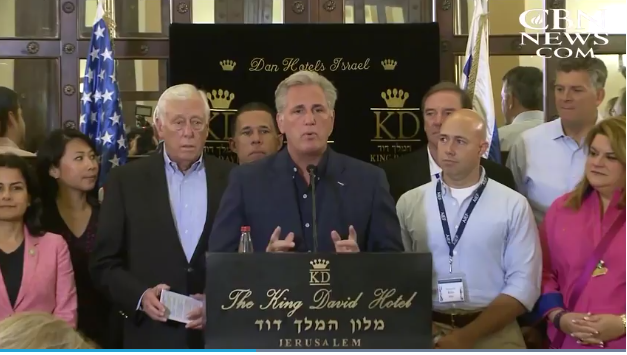 House Majority leader Kevin McCarthy – King David Hotel
Jerusalem, Israel
Congressmen Tour Israel as ‘Americans’ Not Democrats, Republicans
08-08-2017
CBN News Julie Stahl
JERUSALEM, Israel – Democratic and Republican House members stood united on Tuesday in Jerusalem to say the U.S. has no greater ally than Israel.
“But our importance that we wanted to show, one is the bond with our ally [Israel],” said House Majority leader Kevin McCarthy. “We have shared values, shared security interests throughout the world and there is no stronger bond between any ally we have, being the only democracy in the Middle East.” 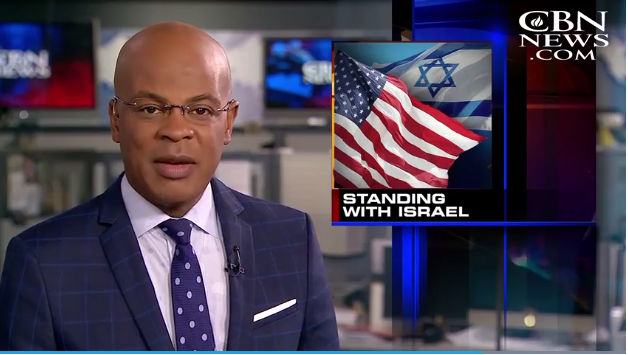 More than 50 members of the U.S. House of Representatives are touring Israel in two partisan groups during August. But McCarthy and Democratic Whip Steny Hoyer told journalists at a joint press conference Israel is completely a bi-partisan issue.
Related McCarthy said he and Hoyer work together on many issues, especially when it comes to sanctions in the world.
“We have made a point of making sure we have an overlapping time here in Israel with Republicans and Democrats because this is not a partisan issue,” McCarthy said.
“We are not here as Democrats and Republicans; we are here as Americans who support Israel’s security, its sovereignty and the safety of its people. We are here because we are the United States of America, partners for peace and partners for security,” Hoyer said.
Hoyer said the overlapping trips – the Democratic contingent came last week and leaves tonight and the Republican contingent arrived last night and leaves next week – is meant to send a message of solidarity with Israel and its people.
“The solidarity that we know is necessary if we are to defeat those – not only in the Middle East but around the world – who through terrorism and violence would put at risk our democracies, which obviously Israel and America share in common, but also put at risk our way of life,” Hoyer said.
Sponsored by the American Israel Education Foundation, the goal is to provide both Democratic and Republican congressmen with firsthand knowledge of U.S.-Israel relations and critical issues facing American policymakers such as regional strategic threats and the impact of recent events on the future.
The policymakers met with Israeli Prime Minister Benjamin Netanyahu and Palestinian Authority officials in Ramallah, as well as members of the Israel Defense Forces.
While you are here…
We’d like to ask for your help. At CBN News, we strive to bring you the most current, pertinent and reliable news possible. We are able to bring you this important news from a Christian perspective because of the help of friends like you who know how vital it is to have an alternative to the news you hear from major media outlets.
Would you help ensure that we can continue to provide this important service to you and our country by considering a special gift today? Or would you become a monthly partner so we know we can count on the resources we need to bring you the best news possible?
Thanks for being a part of the dynamic future of CBN News, as well as helping The Christian Broadcasting Network share the love of Jesus with hurting people everywhere.