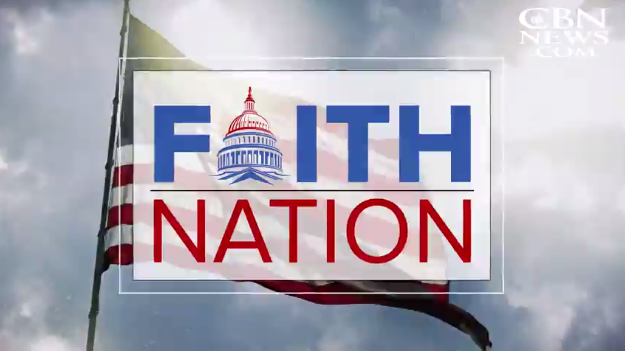 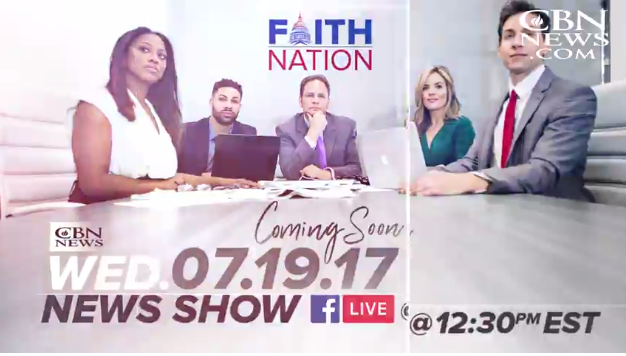 It’s entitled “Faith Nation” and will debut on Facebook Live Wednesday, July 19 at 12:30 p.m. ET and be broadcast every Wednesday thereafter.
Featuring CBN’s David Brody and Jenna Browder, “Faith Nation” will focus on today’s political topics that are significant to Christians, featuring significant audience engagement as viewers will have the opportunity to comment in real time during the live broadcast.
Each weekly show will feature “The District,” with David Brody interviewing leading political figures and news makers in Washington, D.C.
It will also include regular segments from CBN News’ Amber Strong and Ben Kennedy discussing today’s top news stories and their significance to the faith community, man-on-the street interviews with CBN’s Juan Garcia, and additional relevant news content from other CBN News reporters, including Caitlin Burke, Abigail Robertson and Jennifer Wishon.
“There are millions of Christians in America whose values are not being echoed by much of the media. CBN’s ‘Faith Nation’ will provide these viewers with a platform to be informed about important stories that are relevant to them, as well as to give them a real voice in the national discussion of those issues,” said Gordon Robertson, CEO of the Christian Broadcasting Network.
“Faith Nation is designed to tackle two topics we are told to not bring up at the dinner table: faith and politics,” said Dana Ritter, CBN News Washington D.C. bureau chief.
“The show concept was hatched out of the idea that people still want to talk about it but are more comfortable discussing those issues on social media,” she explained. “We see the need to engage the audience where they already are and Facebook allows us to do that while also giving the audience a voice.”
“Faith Nation” is produced by Shoshannah Nunez in the CBN News bureau in Washington DC.
While you are here…
We’d like to ask for your help. At CBN News, we strive to bring you the most current, pertinent and reliable news possible. We are able to bring you this important news from a Christian perspective because of the help of friends like you who know how vital it is to have an alternative to the news you hear from major media outlets.
Would you help ensure that we can continue to provide this important service to you and our country by considering a special gift today? Or would you become a monthly partner so we know we can count on the resources we need to bring you the best news possible?
Thanks for being a part of the dynamic future of CBN News, as well as helping The Christian Broadcasting Network share the love of Jesus with hurting people everywhere.