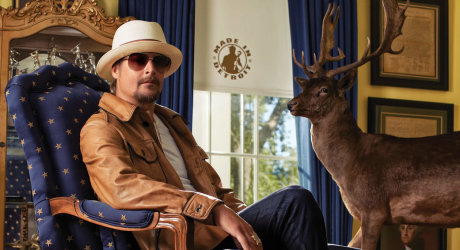 Kid Rock Is Running For Senate – And Maybe You Should Run For Public Office Too
Posted: 13 Jul 2017  Michael Snyder  THE ECONOMIC COLLAPSE BLOG
Would Kid Rock make a good U.S. senator?  When asked if a website promoting his potential run was real, he responded by tweeting that the answer is “an absolute YES”.  Of course no official announcement has been made yet, but Kid Rock says one may be coming very soon.  Many Republicans have been urging him to run against incumbent Democrat Debbie Stabenow, and it looks like this may actually happen.

Thanks to Donald Trump’s election victory last November, a lot of celebrities are starting to realize that they might be able to be successful in politics too.  Even now, there are rumors that Mark Zuckerberg, The Rock, Katy Perry and Oprah Winfrey may all be considering running for president in 2020, and it would be a shock if we didn’t see at least a few “unconventional candidates” shoot for the White House next time around.

Considering the clown show that the Senate has already become, it is hard to imagine things getting much worse.  If you want to see the website that has been set up for Kid Rock’s campaign, you can find it right here.  Apparently his primary slogan is “Are You Scared?”
Some may dismiss this as a publicity stunt, but apparently Kid Rock is quite serious about running…

Famed rocker and admitted Republican Robert Ritchie — aka “Kid Rock” — tweeted Wednesday that he has been asked repeatedly about whether he is going to run for office, specifically for the U.S. Senate. His response? “Absolute YES.”
Ritchie has been vocally supportive of Republican politicians in the past, including President Donald Trump, whom he endorsed during the 2016 presidential elections. Ritchie recently made headlines when he visited the White House with former Alaska Gov. Sarah Palin and fellow rocker Ted Nugent. The photos that came out of the visit prompted nasty comments from many on the left.

When you go to his website, you will notice that nothing is said about the issues.  This is so typical of what you will find on many campaign websites these days, and that is why I have tried to be completely different.  Instead of playing “hide and seek” with the issues, candidates should come out and tell people exactly where they stand so that voters can make informed decisions.

So where does Kid Rock stand?  Well, apparently he is not really that conservative.  The following comes from Fox News…

Rock, an outspoken conservative, endorsed Mitt Romney for president during his 2012 campaign. He told The Guardian in 2015 that he’s a Republican on certain issues, but leans toward the middle on others.
“I am definitely a Republican on fiscal issues and the military, but I lean to the middle on social issues. I am no fan of abortion, but it’s not up to a man to tell a woman what to do. As an ordained minister I don’t look forward to marrying gay people, but I’m not opposed to it,” Rock said.

Obviously this is not the kind of candidate that a lot of us are going to be able to get behind.
In fact, I have unequivocally stated that I will never support any Republican candidate that does not pledge to vote against any bill that contains even a single penny of funding for Planned Parenthood.

But if good people don’t run, we are going to end up with whatever we get.

If you think that Nancy Pelosi, John McCain, Al Franken, Mitch McConnell, Chuck Schumer, Lindsey Graham and the rest of our Congress critters are doing a great job, then no action is required.

However, if you are sick and tired of the mess in Washington, I encourage you to join us in trying to do something about it.

I am trying to do my part by running for Congress here in Idaho.  I am just an ordinary person that has never run for public office before, but at least I am putting myself out there.
And maybe you should consider running for something in 2018 too.

One of the big things that I am trying to do is to inspire good people to run for public office all over the nation.  Because getting one person elected is only going to have a very small impact, but if hundreds of good people start winning elections all over the country that is really going to start changing things.

There is never any guarantee of success.  When our founders decided to rebel against the mighty British Empire, the rest of the world thought that they were crazy.  But instead of listening to the doubts, they put everything they had on the line, and as a result the United States of America exists today.

And whoever thought that Donald Trump would become the president of the United States?  When he first announced his candidacy, the mainstream media mocked him relentlessly.  They treated him like a huge joke, and hardly anyone believed that he actually had a prayer of winning the Republican nomination.

Jeb Bush had 100 million dollars and nearly the entire Republican establishment on his side, and Trump smashed him because Trump simply had a much better message.

So would you consider getting involved?  If you feel like you absolutely cannot run for something, then at least get involved in the campaign of someone that you do feel like you can back.

If we do nothing, there is no hope for America.  Because if this nation stays on the path that it is currently on, it will crash and burn.

So many of us (including myself) have bitterly complained that we never have anyone good to vote for.  And we can continue to do so, or we can take matters into our own hands and start running for these offices ourselves.

A lot of people believe that America is too far gone and that we shouldn’t even try to fight the death of our country.

But I believe that it is never too late to shine a light in the darkness, and I plan to keep proclaiming the truth for as long as I possibly can.

And I hope that as many of you as possible will join with me, because otherwise the clowns will just keep on winning over and over again.