The Restoration of Jim Bakker
“The Lord restored the fortunes of Job when he prayed for his friends, and the Lord increased all that Job had twofold.” (Job 42:10-11, NASU)
Cindy Jacobs, co-founder of Generals International in Texas, along with her husband Mike, were at Jim Bakker’s new Morningside ministry site over the July 4th, 2017 weekend.

Jim and his wife Lori have a new TV program called “The Jim Bakker Show“, viewed by millions on TV and the Internet. I am among those, almost daily watching the hour show for the last two years. Many of the shows I have posted in our Love For His People blog. 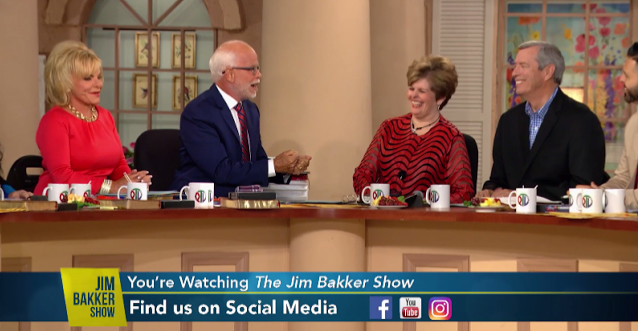 As many know, Jim and his former wife Tammy Faye (who died of cancer in 2007) had the Heritage USA ministry “resort”, along with the worldwide PTL Network, until 1987.

The Heritage USA park also included the Grand Hotel, the Barn, the Studio, a major waterpark, and at least two very nice camping grounds. Located just south of Charlotte, North Carolina in Fort Mill, South Carolina, it was a great place for Christian families and all to spend 3-7 days as a vacation spot. At its height, it was the third most visited place in America, just behind the two Disney locations. 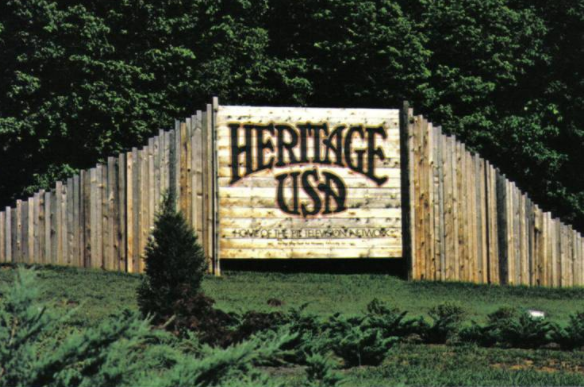 How do I know? We were PTL Partners. We had bought three lifetime memberships in 1984 and 1985. We spent two summer vacations there with our family and stopped again in 1987 on our move from Michigan to Florida.


In 1989 Jim Bakker was convicted (wrongly, in my opinion) for some questionable financial situations, and sentenced to 45 years in prison. Not only were the charges unfounded (as proven later) but also the single judge’s sentence was absolutely beyond any reasonable just time, based on the conviction. Judge Robert Daniel Potter reportedly said it was to teach Christian TV ministers a lesson.

In February 1991… the court held that Potter’s statement at sentencing that Bakker’s actions resulted in “those of us who do have a religion” being lampooned as “saps from money-grubbing preachers or priests” was evidence that he had injected his own religious beliefs into considering Bakker’s sentence. The sentence was reduced to eight years. In 1994 he was released from prison, after serving five years. Wikipedia

Jim had lost everything. His wife divorced him. In 1993 she married the main contractor of Heritage USA, Roe Messner.

Jim’s children, Tammy Sue and Jamie, were treated mostly with contempt, for decades, by many so-called “Christians”.

His beautiful home near Tega Cay, South Carolina, owned by the ministry, was sold while he was in prison. Later it mysteriously burned to the ground.


Living close by, near Charlotte, then and now, I knew of these things on TV and in the newspaper. The Charlotte Observer did all the reporting on all subjects, as much as they could dig up. Before, during, and after Jim’s downfall.

Once in prison, he had lost it all. Speaking of Job, Jim Bakker was as the same. No wife, children gone, his former residence burned to the ground, over two decades of ministry lost, and no friends to speak of. Only the Billy Graham family and Rick Joyner of MorningStar stood with him in prison, and after he was released.

During his time behind bars, Jim has repeatedly said, later on his current TV show, that he had spent the time with the Lord Jesus, reading and studying His Word. He got to know the Lord. Jesus had told him that that was the purpose of his time there.

Half-way through the hour, Cindy shared a profound prophetic word. (Watch the program here.) In essence, the Lord spoke that restoration, double of all that Jim had lost back then, was coming forth. 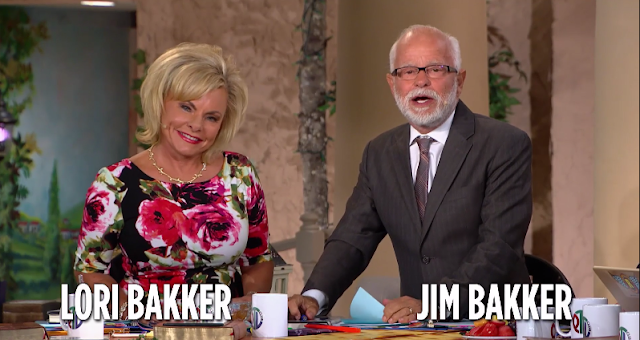 Already he had remarried (Lori Graham Bakker), has had his children restored in their relationship with their father, and just last year (2016) got the name of the ministry TV network back, the PTL Network. (He now said it stands for the “Prophets Talk Loud” network, having many well-known, faithful, accurate prophets on the daily show.)

On the TV set, Cindy declared that not only was restoration coming double fold, but it even included that an actual miniature train, and merry-go-round, similar to the famous and popular ones back in the days of Heritage USA, were going to be restored to Jim. These had been dear to his heart too, for the kids he loved. As she spoke these words, you could see the emotion swell on Jim’s face. 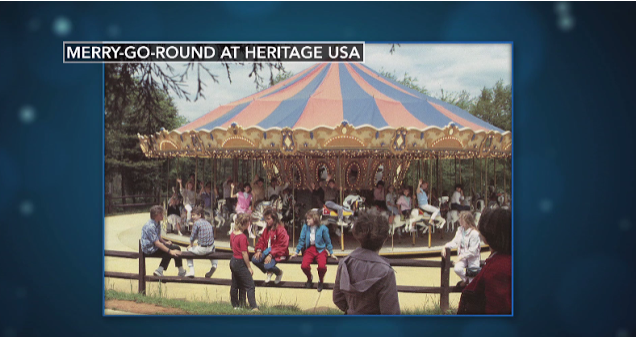 Restoration! Prophetic word from Cindy Jacobs:
She heard a train whistle as she came ion the new property.
Jim will get his train back…and another merry-go-round! 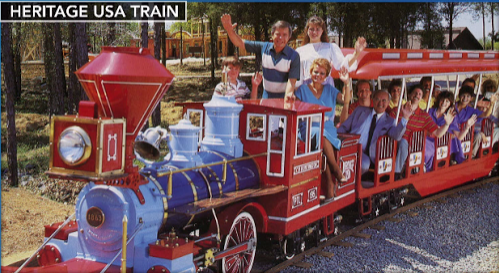 Even as the Lord restored all that had been lost for Job, so it is happening before our eyes these days
for Jim Bakker.

“The Lord restored the fortunes of Job when he prayed for his friends, and the Lord increased all that Job had twofold. Then all his brothers and all his sisters and all who had known him before came to him, and they ate bread with him in his house; and they consoled him and comforted him for all the adversities that the Lord had brought on him. And each one gave him one piece of money, and each a ring of gold.

The Lord blessed the latter days of Job more than his beginning; and he had 14,000 sheep and 6,000 camels and 1,000 yoke of oxen and 1,000 female donkeys.  He had seven sons and three daughters.” (Job 42:10-14, NASU)
I have always admired Jim Bakker. He is a man of faith, a man small in stature but having a big heart, and a builder, both in the natural and the spiritual.
I have met Jim. I like him a lot, and rejoice to see the wrong now being righted. We serve a just God.

Full restoration is promised by the Living God of Israel. We see it with His chosen people the Jews; we see it testified by believers over the centuries, and now we see it in the life of Jim Bakker. 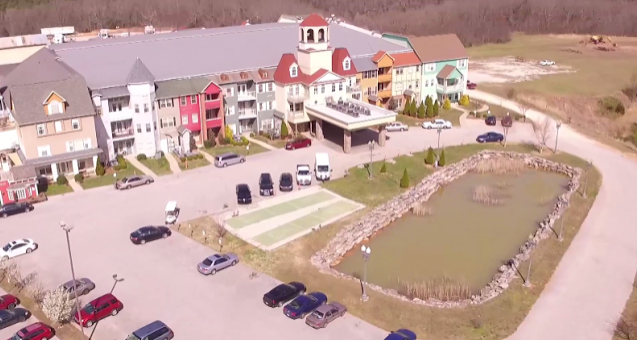 Morningside near Branson, Arkansas 2017
“I will restore to you the years that the locusts ate, the grasshoppers, shearer-worms and cutter-worms, my great army that I sent against you. You will eat until you are satisfied and will praise the name of Adonai your God, who has done with you such wonders. Then my people will never again be shamed. You will know that I am with Isra’el and that I am Adonai your God, and that there is no other. Then my people will never again be shamed.
“After this, I will pour out my Spirit on all humanity. Your sons and daughters will prophesy, your old men will dream dreams, your young men will see visions, and also on male and female slaves in those days I will pour out my Spirit. I will show wonders in the sky and on earth — blood, fire and columns of smoke. The sun will be turned into darkness and the moon into blood before the coming of the great and terrible Day of Adonai.”
At that time, whoever calls on the name of Adonai will be saved. For in Mount Tziyon and Yerushalayim there will be those who escape, as Adonai has promised; among the survivors will be those whom Adonai has called.” (Joel 2:25-3:5, Complete Jewish Bible)
Thank you, Lord Jesus, for restoration! We all can have restoration in our lives.
Now think on this,
Steve Martin
Founder/President
Love For His People, Inc. 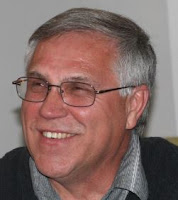 P.S. One of the main reasons I believe the Lord has restored Jim Bakker is because of his love and support for Israel and the Jewish nation. Even at Heritage USA he had built the “Upper Room”, a replica he had done on the South Carolina property after his trip to Israel. On his current show, he often has guests who support Israel. Last year he went on another tour of Israel with Rabbi Jonathan Chan, a frequent guest, and author of the best-seller The Harbinger. 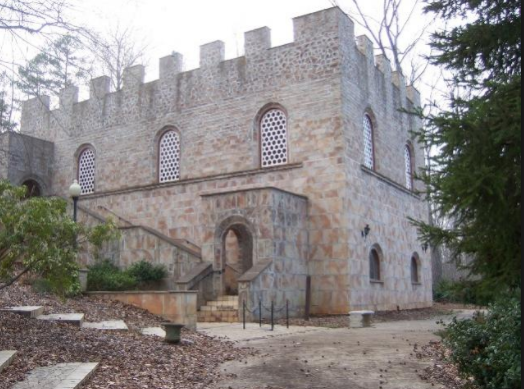 The Upper Room – still stands in 2017. Less than seven miles from our house.

Rabbi Jonathan Cahn on the Jim Bakker Show 2017
If these messages minister to you, please consider sending a charitable gift of $10-$25 today, and maybe each month, to help us bless families in Israel, Pakistan and Northern Ireland, whom we consistently help monthly through our humanitarian ministry. Your tax-deductible contributions receive a receipt for each donation. Fed. ID #27-1633858.

Secure, conveniently contributions can be done online now through our website: Donate
Contribution checks can be sent to:
Love For His People, Inc.  P.O. Box 414   Pineville, NC 28134
Todah rabah! (Hebrew – Thank you very much.) Please share Now Think On This with your friends. Steve Martin
Now Think On This – In the Year of our Lord 7.2
12.17 – #299 – “Restoration of Jim Bakker” – Wednesday, 9:00 pm
Love For His People, Inc. founded in 2010 by Steve & Laurie Martin. Charlotte, NC USA