Donald Trump has once again shown he cares for two things important to millions of Americans: veterans and faith.On Saturday evening, he gave an address at the Celebrate Freedom concert at the Kennedy Center in Washington D.C. 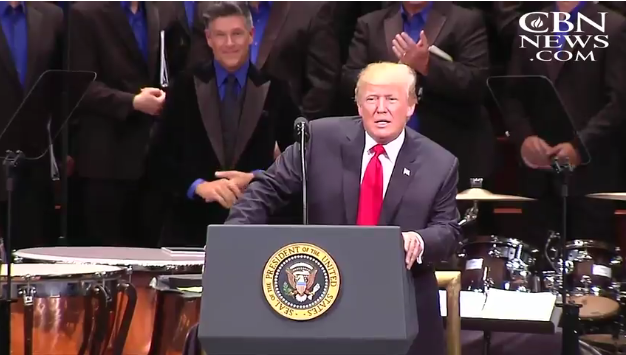 The event was hosted by Pastor Robert Jeffress and the church where he’s the Senior Pastor, First Baptist in Dallas. It was held in honor of men and women who have served in the armed forces.

He pointed back to the roots of religious freedom in the United States, and held that this freedom is only found in God.

“Since the signing of the Declaration of Independence 241 years ago, America always affirmed that Liberty comes from our Creator,” he said. “Our rights are given to us by God, and no earthly force can ever take those rights away.”

And he talked about how religious and civil liberties have come under attack.

“For too long, politicians have tried, oh have they tried, to centralize the authority among the hands of a small few. In our nation’s capital,” he said. “Bureaucrats think they can run over your lives, overrule your values, meddle in your faith, and tell you how to live, what to say, and where to pray.” 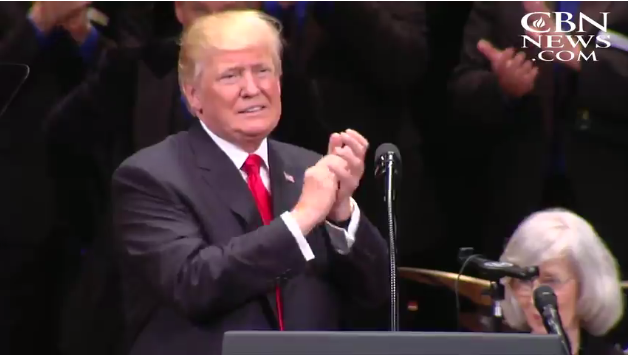 He then affirmed the idea that families and churches are the building blocks of a healthy culture. “But we know that parents, not bureaucrats, know best how to raise children and create a thriving society,” he said.

“And we know that families and churches, not government officials, know best how to create a strong and loving community.”

“And above all else we know this: In America, we don’t worship government, we worship God,” he added

The message resonates with evangelicals who voted for Trump in hopes that their freedom to practice their religious faith and traditional values would be safeguarded.

“For my very first Independence Day celebration as President, there is no place I’d rather be than with you,” he said. He said he’s working to ensure they are cared for.

“Just the other day, we signed (the) Veterans Accountability (act). They’ve been trying to do it for 40 years,” said President Trump. Trump explained that the act streamlines the process of firing Veterans Affairs employees who are incompetent in their jobs or commit fraudulent acts against veterans.

The President offered the veterans heartfelt thanks and asked them to stand.

“You’ve shed your blood, you’ve poured your love, and you’ve bared your soul in defense of our country, our people, and our great American flag,” he said.

“You raced through gunfire, stared down enemy forces and ran past the gates of hell to fight and to win for America, and you’ve won for America.

Throughout his address, the President’s message was clear: he cares about faith, and about defending it.

While you are here…

We’d like to ask for your help. At CBN News, we strive to bring you the most current, pertinent and reliable news possible. We are able to bring you this important news from a Christian perspective because of the help of friends like you who know how vital it is to have an alternative to the news you hear from major media outlets.
Would you help ensure that we can continue to provide this important service to you and our country by considering a special gift today? Or would you become a monthly partner so we know we can count on the resources we need to bring you the best news possible?
Thanks for being a part of the dynamic future of CBN News, as well as helping The Christian Broadcasting Network share the love of Jesus with hurting people everywhere.