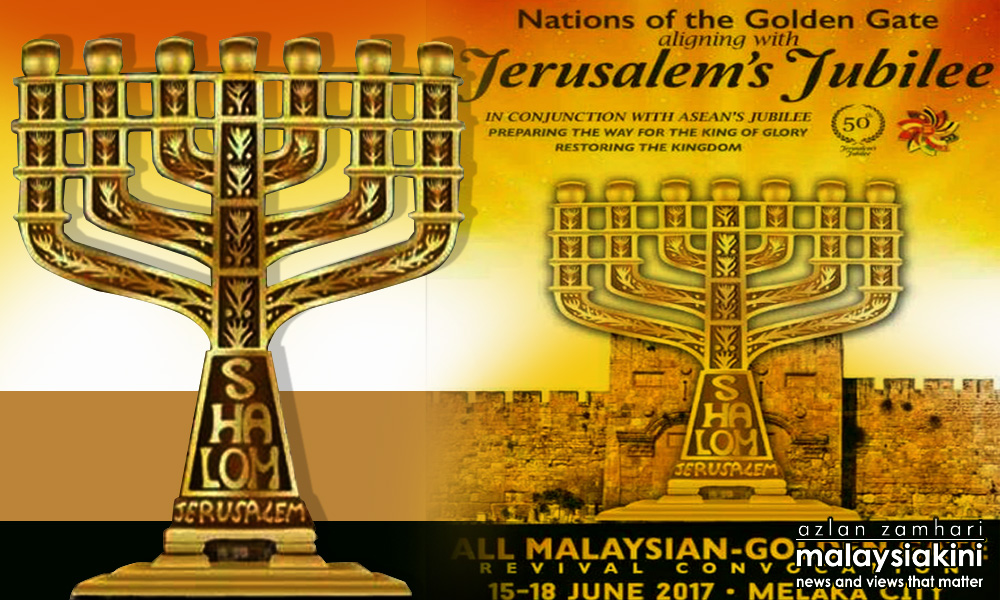 Deputy Prime Minister Ahmad Zahid Hamidi ordered the police to ban the “Jerusalem Jubilee” gathering scheduled to be held in Melaka from June 15 to 18.
Ahmad Zahid who is also the Home Minister pointed out that the rally will only hurt the Muslims if it was allowed to be held.
“When the sentiments of Muslims are affected and their feelings offended… I as Home Minister order the police to ban the meeting. This is a message that is loud and clear.
“Whoever is organising the ‘Jerusalem Jubilee’, your permit has been cancelled under my official directive,” he said in his speech at the Perak state level “Instilling of Moral Values during the Month of Ramadan” programme in Ipoh today.
At the event, the deputy prime minister partook in the Iftar meal of Ramadan together with those attending the Maghrib prayers at Masjid Annur Batu 8, Ulu Kinta.
He also presented donations to 100 orphans.
Organisers already decided to cancel
Earlier, the Jerusalem Jubilee organisers had already decided to cancel the rally after consultation and advice from the police.
Melaka police chief Abd Jalil Hassan said police had summoned the organisers and they had made their own decision to cancel the rally and to date 32 police reports had been made.
Ahmad Zahid, meanwhile, thanked Muslim and non-governmental organisations that lodged police reports to protest the rally.
“Several police reports were made at Bukit Aman and they referred the matter to me and I had ordered the police to cancel the rally,” he said adding that celebrating Israel’s occupation of Palestine offended Malaysians.

The deputy prime minister warned all parties to respect other religions and maintain mutual religious tolerance in a country comprising people of various races.

“We respect other religions although there are former leaders who say Malaysia is not a country that practised Islam as the official religion, but Islam is the religion of the Federation. Please refer to Article 3 of the Constitution.
“I’m colour blind when carrying out duties to protect the religious sensitivities of others. There are things that can be forgiven and what cannot be forgiven is anything affecting Islam,” said Ahmad Zahid.
In the meantime, he announced he would organise a special Aidilfitri open house for the General Operations Force in appreciation of their contributions and service to the nation.
Love For His People, Inc. founded in 2010 by Steve & Laurie Martin. Charlotte, NC USA