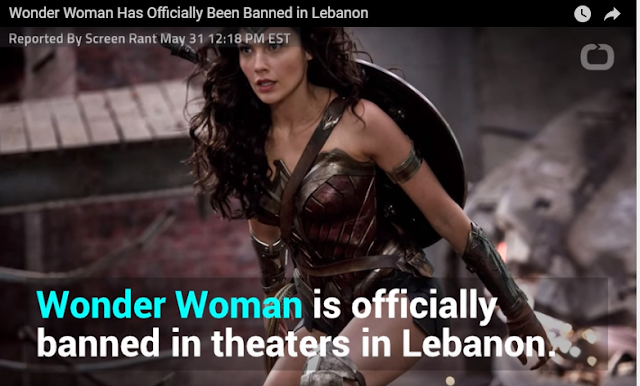 Thursday, June 01, 2017 |  Charles Gardner  ISRAEL TODAY
Lebanese authorities banned the new Wonder Woman movie Wednesday hours before it was due to premiere in the capital Beirut following a campaign against its lead actress, Gal Gadot, who served in the Israeli army, a security official and activists said.
A premiere scheduled for Wednesday was cancelled at the last minute as the ban began to take hold.
Lebanon is officially at war with Israel as the two countries have faced off in a number of wars the latest in 2006 which left much of the Lebanese infrastructure battered and left hundreds dead.
“This time around the campaign bore fruit in contradiction to the previous campaign against the movie “Batman v Superman”, in which Gadot also starred,” said Rania Masri a campaigner against the screening of the movie.
Masri further said, “it was ‘different’ this time because of a major media push against the movie that has helped the ban.”
The leading al-Akhbar newspaper had a front page article titled “The Israeli soldier has no place in Lebanon.”
Gadot had praised the IDF’s actions during the 2014 Gaza-Israel war sending prayers to, “soldiers who are risking their lives protecting my country against the horrific acts conducted by Hamas”, she wrote on her Facebook page.
WATCH HERE
Want more news from Israel?Click Here to sign up for our FREE daily email updates
Love For His People, Inc. founded in 2010 by Steve & Laurie Martin. Charlotte, NC USA