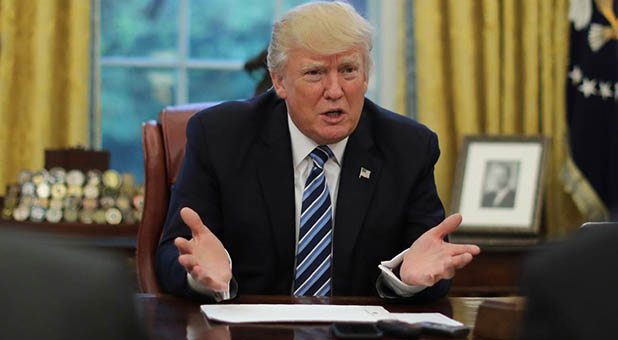 9:00AM EDT 6/1/2017 CONSERVATIVEHQ  charisma news
During the 2016 presidential campaign, then-candidate Donald Trump said that if voters would vote for him to end Obama’s job-killing economic policies the American economy could grow at 4 percent, maybe even more.
Obsessed as the establishment media is about fake news and lies about Russia, you’d never know that—thanks in large measure to President Trump’s deregulation and economic policies—we are rapidly closing in on that 4 percent economic growth goal.
The Atlanta Federal Reserve’s GDP Now forecast model, released yesterday, showed the U.S. economy is expected to grow at a 3.8 percent annualized pace in the second quarter based on a report that showed an increase in personal spending in April.
The latest second-quarter gross domestic product estimate was faster than the 3.7 percent clip calculated just five days ago on May 26, the Atlanta Fed said according to Reuters.
This trend has been building since March, when The Wall Street Journal‘s Steven Russolillo reported that consumers said they felt better about the economy than they have in the past 17 years. Optimism among small-business owners has also surged since the election said Russolillo.
Meanwhile, NewsMax reports U.S. consumer spending recorded its biggest increase in four months in April and monthly inflation rebounded, pointing to firming domestic demand.
Consumer spending, which accounts for more than two-thirds of U.S. economic activity, is likely to remain on solid ground in the wake of other reports yesterday that showed confidence among households still at lofty levels and strong gains in house prices in March reported Reuters.
A third report on Tuesday showed house prices increased 5.9 percent year-on-year in March. Rising house prices are also supporting consumption reported Reuters.
Consumer spending is being boosted by a tightening labor market, which is gradually pushing up wages. Personal income rose 0.4 percent last month as wages jumped 0.7 percent. Savings were little changed at $759.1 billion last month.
Perhaps even more importantly, according to The Wall Street Journal‘s AnnaMaria Andriotis, credit scores for U.S. consumers reached a record high this spring while the share of Americans deemed to be some of the riskiest borrowers hit a record low—a potential boon for lending and economic activity.
Consumers’ improving fortunes reflect falling unemployment and continued economic growth said Andriotis.
Combined those two factors bode well for future consumer spending as wage growth and increased borrowing power give consumers more spending power.
A month or so ago our friend, economist and Trump campaign economic advisor Stephen Moore, observed that “the one thing Washington is very good at is giving every excuse under the sun for why achievable things can’t done.”
As Moore noted, the left and even some academics on the right claim that 4 percent or greater economic growth “is a pipe dream.”
Moore recounted that CNNMoney asked leading economists about Trump’s promise, and they found a strong consensus that 4 percent growth is “impossible, or at least highly unlikely.”
Even the 3 percent growth goal Trump’s budget team had projected was ridiculed.
“Experts” said Moore, point to a widely cited 2016 San Francisco Federal Reserve study that argues that the “new normal” is 1.5 to 1.75 percent GDP growth—or less than half the post-World War II average pace of progress.
Moore said many of his fellow economists are sounding as myopic as the legendary patent office official who once proclaimed that everything that could be invented had already been invented.
Stephen Moore was right. What the myopic economists hadn’t counted on was Donald Trump actually producing policies that would strengthen the demand side of the U.S. economy; reducing immigration to increase wages and job security for American workers and reducing regulations to give small business the increased confidence necessary to stimulate employment, thereby putting more wage-earners into the market for goods and services.
Now there’s just one thing left to do: Get Congress moving on President Trump’s tax and economic growth plan. The Capitol Switchboard is 1-866-220-0044. We urge you to call your representative and senators, tell them that, despite the establishment media’s best efforts to hide the truth, the economy is growing, and the best way to keep it growing is to pass President Trump’s tax and economic growth plan.

This article was originally published at ConservativeHQ.com. Used with permission.
Charisma’s Special Anointing Bundle. Get Charisma magazine plus these 2 Books – The Deborah Anointing & The Esther Anointing for only $24.97. Subscribe Now!
Hearing God’s voice changes everything. You’ll gain clarity, purpose and direction for your life. Start your journey to live your Life in the Spirit. Click here to draw closer to God!
Love For His People, Inc. founded in 2010 by Steve & Laurie Martin. Charlotte, NC USA