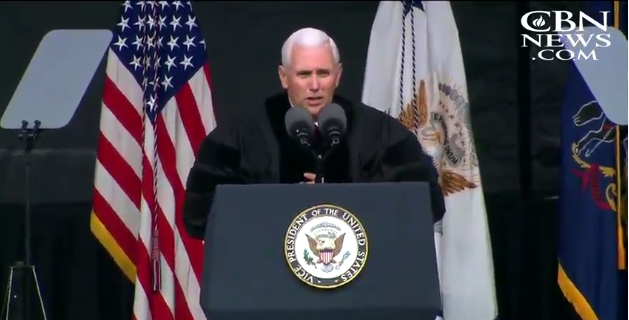 “By standing together in solidarity and walking out, we hope to take back some of the celebration for ourselves,” said Brian Rickets, a graduate and of the college’s student body President Emeritus.

However, others said that Vice President Pence still deserves respect for his upstanding character, despite political disagreements.
“Even those who disagree with Mike Pence recognize him as a man of principle. I do as well,” Notre Dame’s administrator told Fox News.
Watch here: VP Mike Pence Commencement Speech
Pence Quotes Scripture in his Address to Grove City College Graduates
“The Bible says, ‘to whom much is given, much will be required.’ I believe that you leave here today with one particular responsibility. That’s what I came here to tell you,” Vice President Mike Pence told the graduates of Grove City College, class of 2017, earlier today.
“You leave here with a responsibility to lead. All of you, without exception, are called to be leader, no matter where you go from here.” 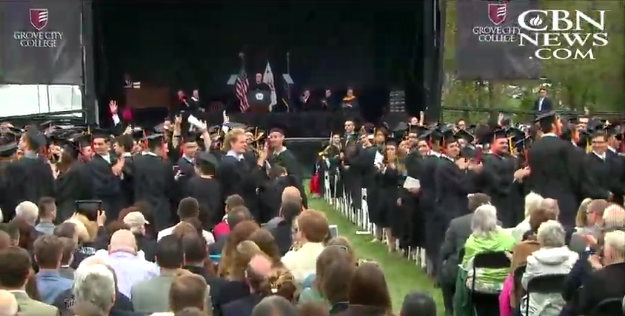 Vice President Mike Pence speaks to the graduates of Grove City College
The Vice President, an unashamed Christian, encouraged the graduates to lead with character and courage.
“Your education these past four years has prepare you to lead. You hold within you all you need to leave this place and succeed. All you need to add to it is courage,” Pence said.
He captured the brave stance he’s taken for morality and virtue he’s embodied in his new role as a national leader.
“You must inspire those around you by being salt and light in every walk of life,” he said, referencing Matthew 5:13-14.
“You must aspire to be men and women of character.”
Pence also encouraged the graduates to embrace humility, as Christ did.
“Servant leadership, not selfish ambition, must be the animating force of the career that lies before you. For it’s written, ‘whoever must be first of all must be servant of all.'”
Quoting C.S. Lewis, he said, “Courage was not one of the virtues, it was actually a form of all the virtues.”
Love For His People, Inc. founded in 2010 by Steve & Laurie Martin. Charlotte, NC USA