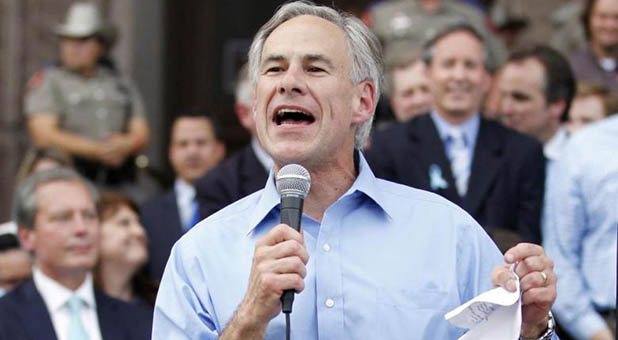 5/19/2017 BOB ESCHLIMAN  CHARISMA NEWS
Sunday, Texas Gov. Gregg Abbott will sign into law Senate Bill 24, which codifies the religious liberty protections of pastors in his state that are enshrined in the First Amendment to the U.S. Constitution.
Joined by Lt. Gov. Dan Patrick, who championed the bill in the Senate, Abbott will sign the bill during the 12 p.m. EDT church service at Grace Church The Woodlands in Spring, Texas. The senior pastor there, Dr. Steve Riggle, is one of the now-famous “Houston Five” pastors who opposed the Houston city ordinance that allowed men to use women’s restrooms, locker rooms, and other facilities that had been traditionally segregated on the basis of biological sex.
The Houston Five’s sermons, in which they rebuked the unbiblical nature of the ordinance, were subpoenaed by government attorneys who sought to punish the pastors for their bold stance. SB 24 prohibits a government entity from compelling “the production or disclosure of a written copy or audio or video recording of a sermon delivered by a religious leader during religious worship of a religious organization or compel the religious leader to testify regarding the sermon.”
Pastors from around the state are expected to attend the worship service and to join Abbott on the stage as he signs the bill into law. A reception has been planned for before the service begins, at which time it is likely the pastors will continue their lobbying efforts for the other piece of the puzzle created by the Houston city ordinance: calling a special session if the House of Representatives fails to pass the SB 6 “bathroom bill.”