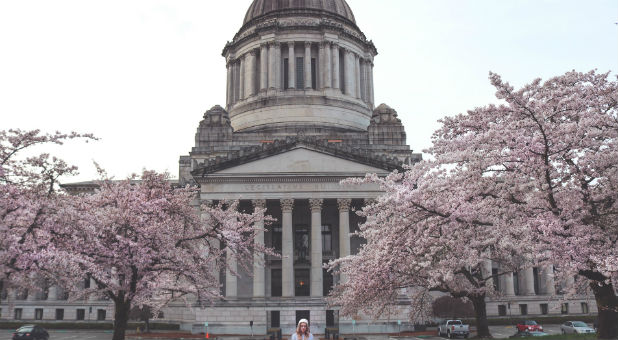 Join us on our podcast each weekday for an interesting story, well told, from Charisma News. Listen at charismapodcastnetwork.com.
Hope Through Healing Hands and the ONE Campaign hosted 10 Christian artists, pastors and other faith leaders in Washington, D.C., on May 17 to conduct meetings with members of Congress and their staff and share their concerns about the devastating effects that could result from President Trump’s severe proposed budget cuts to foreign assistance. Participants in this “Christian Influencers Advocacy Day,” include artists Jennifer Nettles, Steve Taylor, Matt Maher, Dan Haseltine and Brandon Heath, and Pastors Bob Griffith, Brandon Tubbs and Josh Rouse.
These Christian influencers are the latest to join the drumbeat of calls to Congress to protect the international affairs budget. In February, more than 120 retired generals signed a letter warning that cuts to foreign assistance, even while increasing military spending, would not make the country safer. In March, over 100 Christian pastors, leaders and artists signed a letter to Congress asking them to oppose the proposed cuts as their moral responsibility. Signatories included Cardinal Timothy Dolan and Rev. Dr. Samuel Rodriguez, both of whom prayed at the president’s inauguration.
That foreign aid helps ensure our national security while also protecting the most vulnerable populations is one of the arguments the leaders will make with congressional representatives on “Christian Influencers Day,” in hopes of preserving foreign assistance funding at FY17 levels.
They will use similar language as that sent to President Trump in this recent letter from faith leaders:
“If we can protect the lives of mothers and children, we can intervene not just to save lives but to establish a foundation of health and wellness to uplift communities, societies, and nations out of extreme poverty.
“Beyond our calling to care for the world’s poorest as a moral or economic commitment, this is also in the best interest of our national security. We know that development is a critical prevention tool that protects nations from becoming fragile and failed states that are ripe breeding grounds for violent extremism and terrorism.
“Supporting foreign assistance isn’t just the right thing to do; it’s the smart thing to do.”
Similarly, the letter from a group spearheaded by World Vision and sent to Congress, reflected more of these thoughts:
“Matthew 25 tells us when we serve the least of these, we are serving the Lord. As people of faith, we cannot turn our backs on those in desperate need. We are grateful for America’s global development and diplomacy programs that have been instrumental in saving lives, safeguarding religious liberties, and keeping America safe and secure. Both Republican and Democratic administrations have strong legacies of supporting humanitarian and development programs that enable countless people to pull themselves out of poverty and live life with dignity. It is through these diplomatic and development tools that we’ve seen countries and communities build peaceful, productive societies that do not turn to violence or terrorism.”
“More than 50 percent of Americans still believe that our foreign assistance amounts to 25 percent of the U.S. budget. In actuality, it is less than 1 percent,” said Jenny Dyer, Ph.D., executive director of HTHH. “If Congress accepts President Trump’s 28 percent cut to foreign assistance, the historic progress we have led over the past 25 years to halve poverty, preventable, treatable diseases, and the deaths of mothers and children will halt. The world will become less safe at home and abroad.”
Tom Hart, the ONE’s North America executive director echoed Dyer. “Our foreign assistance programs are among the few places in the government where funding translates to lives saved. Cutting foreign aid would put in jeopardy those who depend on life-saving assistance like anti-retroviral medicines for HIV/AIDS, food assistance for those in famine, bed nets for those fighting malaria, and anti-corruption measures. These programs have had strong bipartisan support for generations and we’re going up to the Hill to ensure it stays that way.”