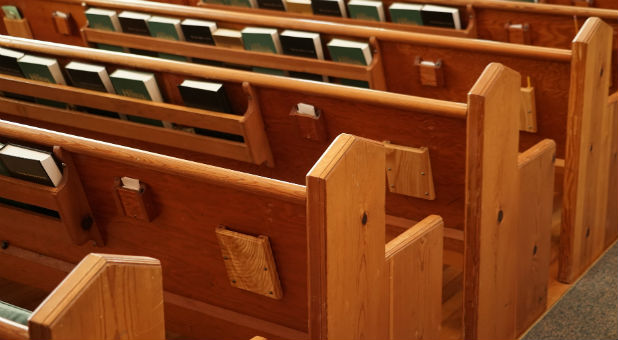 Christians Tapping Into New-Age Lies as Great Falling-Away Continues
5/12/2017 JENNIFER LECLAIRE  CHARISMA NEW
Jennifer LeClaire is now sharing her reflections and revelations through Walking in the Spirit. Listen at charismapodcastnetwork.com.
Is Sister Christian sitting next to you in Sunday service a closet New Ager? Is your pastor tapping into new spirituality? Are you believing a new thought lie?
I was simply shocked to read the results of a new Barna study that shows only 17 percent of Christians who consider their faith important and attend church regularly actually have a biblical worldview. But I was decidedly dismayed by the subsequent revelations in the report.
In a nutshell, Barna found many Christians strongly agree with worldviews that compete with biblical teachings. In other words, many believers are believing flat out lies. Consider these startling stats about practicing Christians:
38 percent are sympathetic to some Muslim teachings
61 percent agree with ideas rooted in new spirituality
54 percent resonate with postmodernist views
36 percent accept ideas associated with Marxism
29 percent believe ideas based on secularism
Yes, really—and Millennials and Gen-Xers are the most likely to fall for these deceptions. Males are more likely to fall away than females. City-dwellers more apt to stumble into these lies than suburban or rural residents. And Americans of color are more likely than white Americans to buy into wrong beliefs.
The Great Falling-Away Is Underway
Paul wrote, “Now the Spirit clearly says that in the last times some will depart from the faith and pay attention to seducing spirits and doctrines of devils, speaking lies in hypocrisy, having their consciences seared with a hot iron, forbidding to marry, and commanding to abstain from foods, which God has created to be received with thanksgiving by those who believe and know the truth” (1 Tim. 4:1-3).
Some have indeed departed from the faith because they have engaged with deceiving spirits and embraced doctrines of demons. We’ve witnessed more than one man of God with a major ministry platform bow a knee to doctrines like universalism, deceiving and being deceived with this deadly heresy. Despite many in the church lifting their voice against heretical teachings, these deceived ministers hold fast to their demonic doctrine.
We’ve also watched famous pastors speak lies in hypocrisy—lies that left many hurt, wounded and disillusioned—and yet they remain adored and adorned in the megachurches that made their name great. Clearly, the conscience of some influential church leaders has already been seared with a hot iron (see 1 Tim. 4:2). Some have become the proverbial blind leading the blind.
And would you believe it? Some modern-day, Spirit-filled churches even reserve the right to tell you whom you can or can’t marry (along with many other details of your personal life). I’ve known folks who have nervously gone to ask the pastor for permission to marry another congregant, hoping that their request wasn’t denied and their love wasn’t dashed. And this wasn’t during the Shepherding Movement; this was recent.
Living Idolatrous Lifestyles
Paul wrote, “Know this: In the last days perilous times will come. Men will be lovers of themselves, lovers of money, boastful, proud, blasphemers, disobedient to parents, unthankful, unholy, 3 without natural affection, trucebreakers, slanderers, unrestrained, fierce, despisers of those who are good, traitors, reckless, conceited, lovers of pleasures more than lovers of God, 5 having a form of godliness, but denying its power. Turn away from such people” (2 Tim. 3:1-5).
Paul’s laundry list of idolatrous ingrates is not particularly new, but the love of many has certainly grown colder. Many pastors ignore the homeless (and the widows and the orphans). All the while, they spend multiplied thousands on sermon props and video announcements that rival MTV so they can entertain an idolatrous generation on Sunday mornings.
Some pastors offer a 20-minute sermonette and afterwards neglect the opportunity to lay hands on the sick, get people filled with the Holy Spirit or otherwise open up the altar for believers seeking a touch from God. This form of godliness does not make room for God’s power. Pleasure has taken its place.
Scratching Itchy Ears
Paul also warned, “For the time will come when people will not endure sound doctrine, but they will gather to themselves teachers in accordance with their own desires, having itching ears” (2 Tim. 4:3).
We see some of this among congregations even now. Beyond universalism, there’s the prosperity gospel that only demonstrates one side of the cross. There’s the grace message that perverts the gospel. These are fables. Billy Graham once filled stadiums with his bold preaching on subjects like hell and holiness. Today, seeker-friendly preachers fill stadiums to hear a motivational message followed by a call to give. Many modern believers may cringe if they had to endure a Billy Graham sermon on hell. Again, some deny the existence of hell.
So is the Great Falling-Away already underway? I believe so. And I pray. I pray that the Lord would count me faithful, that I would not be deceived in these last days and that I might be a pure vessel the Lord can use to sound the alarm. What about you?

Jennifer LeClaire is senior editor of Charisma. She is also director of Awakening House of Prayer in Fort Lauderdale, Florida, co-founder of awakeningtv.com, on the leadership team of the New Breed Revival Network and author of several books, including The Next Great Move of God: An Appeal to Heaven for Spiritual Awakening; Mornings With the Holy Spirit, Listening Daily to the Still, Small Voice of God; The Making of a Prophet and Satan’s Deadly Trio: Defeating the Deceptions of Jezebel, Religion and Witchcraft. You can visit her website here. You can also join Jennifer on Facebook or follow her on Twitter. Jennifer’s Periscope handle is @propheticbooks.
Leaders are readers! Subscribe now and get 3 magazines for the price of 1. Get Ministry Today, Charisma and SpiritLed Woman all for $24. YES – Sign me up!
3 Reasons Why you should read Life in the Spirit. 1) Get to know the Holy Spirit. 2) Learn to enter God’s presence 3) Hear God’s voice clearly! Click Here to draw closer to God!
Did you enjoy this blog? Click here to receive it by email.
Did you like this article? You’ll enjoy Jennifer LeClaire’s book, The Next Great Move of God: An Appeal to Heaven for Spiritual Awakening
Love For His People, Inc. founded in 2010 by Steve & Laurie Martin. Charlotte, NC USA