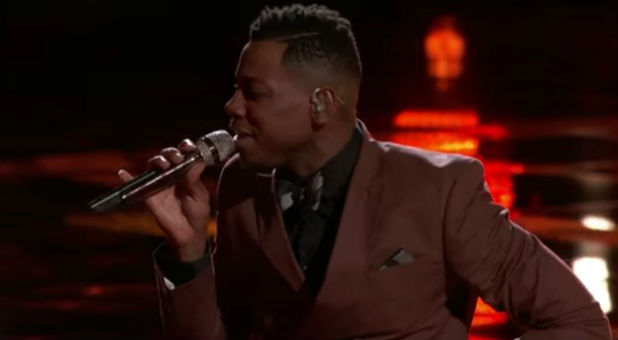 5/4/2017 JESSILYN JUSTICE  CHARISMA NEWS
Join us on our podcast each weekday for an interesting story, well told, from Charisma News. Listen at charismapodcastnetwork.com.
Worship leader Chris Blue landed a top 10 finalist spot on The Voice this week with an emotional tribute to his fiancee.
Blue, a member of Team Alicia (Keys) wowed the judges and folks at home with his rendition of “When a Man Loves a Woman,” dedicated to his fiancée, who has been battling cancer.
“Yaaalll Because of GOD and YOU I’m running into the next round like …” Blue tweeted with a GIF (Graphics Interchange Format, a compressed photo format) of himself.
Before his debut on The Voice, Blue was a worship leader at Cokesbury United Methodist Church in Knoxville, Tennessee.
As he was preparing for his audition this season, Blue says he almost didn’t try out because of his fiancée’s cancer battle.
“When everything happened with my fiancée and her story, I realized that life was just too short,” Blue says. “And after God was kind of pushing me to go forth, and I was declining and saying ‘No. This can’t be …’ I asked that He would just confirm, and He did, and when He did, I would say that really did help push me and helped me overcome the fear and just do it.”
He tells the Knoxville News Sentinel he had a simple strategy for his audition.
“Don’t mess up. Don’t forget any words. Don’t embarrass yourself or your family. Don’t embarrass Jesus.’ Aside from that man, just saying ‘You know what. This is it. The moment is right now, and … there’s a chance that you may not get another one. Because of that (I’m) going to give it everything right here right now.’ And so that was my mindset. I tried not to focus on the coaches. I tried to take myself back to my childhood. My mom brought us up in church, and my dad brought us up in church, and so we would go around singing and traveling the state of Florida.”
Congrats on your top-10 spot, Blue!