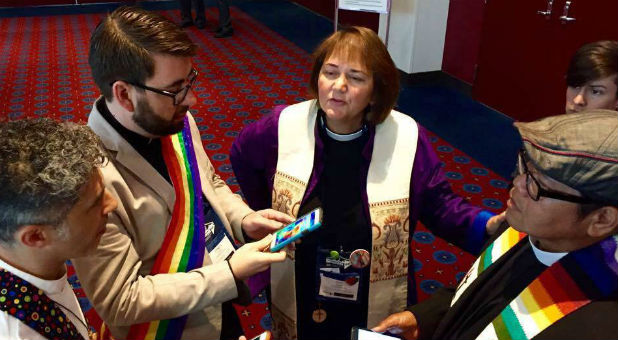 4/29/2017 JESSILYN JUSTICE  CHARISMA NEWS
Join us on our podcast each weekday for an interesting story, well told, from Charisma News. Listen at charismapodcastnetwork.com.
The United Methodist Church Judicial Council ruled lesbian, gay, transgender and bisexual members could not be consecrated as clergy.
The ruling came after married lesbian Karen Oliveto was consecrated as bishop last year. Despite the ruling, Oliveto can still serve as bishop until it is determined she violated these standards.
“The Judicial Council had a difficult task of ruling on the narrow basis of church law that has been carefully developed over the years to protect the rights of clergy accused of wrongdoing—sometimes well beyond the bounds of reasonable doubt and to the point of sidelining concern for victims,” UMAction Director and 2016 General Conference delegate John Lomperis said in a release.  “I celebrate that these landmark rulings should now make it significantly easier to bring accountability for pastors who choose to violate biblical standards for sexual self-control. We are slowly but increasingly strengthening biblical accountability in our church,” the statement continued.
According to the release, this binding ruling clarifies several matters in United Methodist church law: Because of church standards only recognizing monogamous, heterosexual marriage and disapproving of sexual relations outside of it (Paragraphs 161B, 161F, 310.2d, and 2702.1b of the UMC’s governing Book of Discipline), which UMC clergy must vow to uphold, any “partnered homosexual … does not meet the minimum standards” for ordination, and a minister found to be “openly homosexual and partnered” cannot be made bishop.
To be disciplined for violating separate provisions prohibiting the ordination of “self-avowed practicing homosexuals” (Paragraphs 304.3 and 2702.1b), it can be enough to prove that a minister is in a same-sex civil marriage.