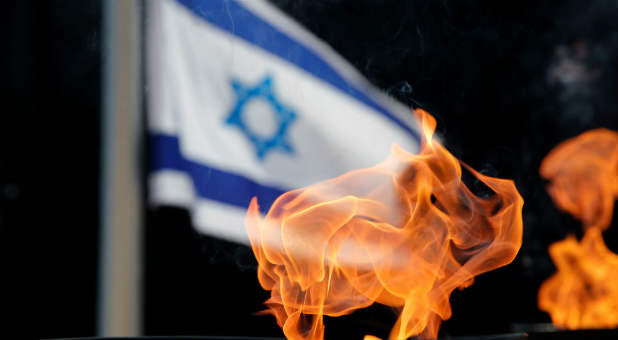 Terrorists Strike, Anti-Semitism Spikes in US as Israel Remembers Holocaust

At the opening ceremony of Yom HaShoah (Holocaust Remembrance Day) at Jerusalem’s Yad VaShem Holocaust Museum Sunday evening, Israeli President Reuven Rivlin began by telling how Jews in the Bergen-Belsen Concentration Camp celebrated the first night of Hanukkah in 1943.
The rabbi lit a candle, he said, and led the prisoners in the traditional holiday prayer.
“Blessed are you, Lord our God, who has given us life and sustained us and allowed us to reach this season,” he prayed, thanking God from inside the death camp.
Rivlin then said, “I stand here on this evening of awe, in the rebuilt Jerusalem, the capital city of the State of Israel, and in the name of our valiant brothers and sisters, victims of the Shoah, and the survivors, who struggled for survival, for their Jewishness, and for their humanity … am Yisrael chai” [the people of Israel live]!
And that was evident on Monday when the two-minute memorial siren sounded throughout Israel. People on the street bowed their heads, while people driving stopped their cars and stood next to them.
Hours before Sunday evening’s ceremony, a Palestinian teen stabbed four people near the Tel Aviv promenade. Police arrested the attacker and took him in for questioning. All four are recovering from their wounds.
Again Monday, a woman from Duma, an Arab village near Nablus, stabbed a female soldier at the Kalandiya checkpoint. Paramedics evacuated the soldier to the hospital in moderate condition. The Shin Bet (Israel Security Agency) named the attacker as Asya Kabaneh, 41, from an Arab village near Nablus.
A mother of nine, the woman told investigators “she has been engaged in a lengthy conflict with her husband, who has threatened to divorce her.” Following a quarrel Sunday evening over their children’s education, she decided to commit a terror attack so security forces would shoot her, telling investigators she was “fed up” with her life.
Meanwhile, the Anti-Defamation League (ADL) says the first quarter of 2017 showed a whopping 86 percent increase in anti-Semitic incidents—harassment, bomb threats and vandalism—in the U.S., up from a 34 percent increase in 2016.
The ADL published the data in its annual audit of anti-Semitic incidents.
“There’s been a significant, sustained increase in anti-Semitic activity since the start of 2016, and what’s most concerning is the fact that the numbers have accelerated over the past five months,” ADL CEO Jonathan Greenblatt said in a statement.
According to the report, California, New York, New Jersey, Florida and Massachusetts, areas with a large Jewish population, had the highest number of incidents.
In other words, 72 years after six million Jews perished at the hands of Hitler’s regime, anti-Semitism in the United States is rising at unprecedented rates.

Reprinted with permission from CBN.com. Copyright The Christian Broadcasting Network, Inc., All rights reserved.
Leaders are readers! Subscribe now and get 3 magazines for the price of 1. Get Ministry Today, Charisma and SpiritLed Woman all for $24. YES – Sign me up!
3 Reasons Why you should read Life in the Spirit. 1) Get to know the Holy Spirit. 2) Learn to enter God’s presence 3) Hear God’s voice clearly! Click Here to draw closer to God!
Did you enjoy this blog? Click here to receive it by email.
Love For His People, Inc. founded in 2010 by Steve & Laurie Martin. Charlotte, NC USA