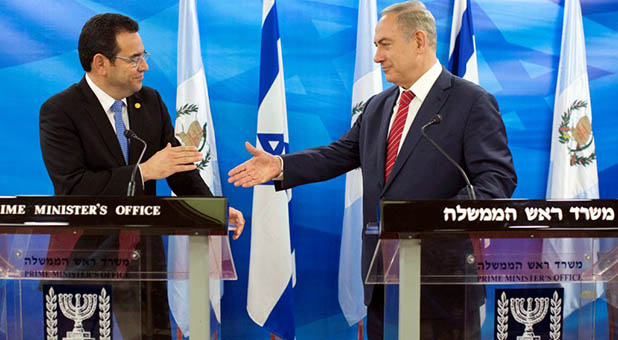 4/26/2017 SEAN SAVAGE/JNS.ORG  CHARISMA NEWS
Throughout the seven decades since it declared independence, Israel has waged an ongoing struggle for legitimacy, navigating the global arena to find its place among the nations.
While many factors went into Israeli independence, the United Nations Partition Plan of 1947 and subsequent Resolution 181 laid the foundation. As with any contentious vote, there was significant lobbying and horse trading involved. But ultimately, 33 countries voted in favor, securing the necessary two-thirds majority in the U.N. General Assembly for the establishment of a Jewish and Arab state in the former British Mandate of Palestine.
For Israel’s 69th Independence Day, JNS.org looks at how four countries actively involved in the historic 1947 vote not only shaped Israeli history, but have robust current relationships with the Jewish state and might play key roles in the country’s future.
Guatemala
This small and largely impoverished Central American country—with significant natural resources, rich history and vast biodiversity—represents an important partner for Israel as the latter seeks to build non-traditional allies worldwide.
Late last year, Guatemalan President Jimmy Morales made a historic visit to Israel, where Knesset Speaker Yuli Edelstein noted the key role Guatemala played in the 1947 vote by enlisting 13 Latin American and Caribbean—the most from any regional bloc—to vote in favor of the partition plan.
“It could be that without Guatemala, the resolution on that fateful day would not have passed, and history would be very different,” Edelstein said.
During his visit, Morales—a devout evangelical Christian—said he looked forward to bolstering agriculture, science, technology and security ties with Israel.
Liberia
As one of the few independent African states in 1947, Liberia’s vote was essential to Zionist supporters. The country—founded by freed American slaves in the 19th century—came under intense lobbying from the U.S. which, at the time, threatened to cut its international aid.
Relations between Israel and Liberia have become increasingly important, especially in areas of international aid, agriculture and technology as the Jewish state aims to build relations with sub-Saharan Africa—a key priority of Prime Minister Benjamin Netanyahu.
Israel was on the frontline helping Liberia deal with the deadly and widespread Ebola virus as the disease raged in West Africa from 2014-2015, killing thousands. Last June, Liberian President Ellen Johnson Sirleaf visited Israel, where she noted the Jewish state’s support.
“Throughout my visit with my delegation we wanted to learn about the extraordinary developments which Israel has made, especially in agriculture, which we look at with wonder each time we see it,” Sirleaf said. “You have done wonderful things in the field of water. There are a lot of similarities between Liberia and Israel.”
Liberia’s agriculture minister, along with a dozen high-level African officials, participated in an agricultural conference in Jerusalem last December. Later this year, Netanyahu is scheduled to attend a major African summit in Togo, where Liberia is expected to participate.
India
Unlike the other countries listed here, India voted against the 1947 partition plan, despite Prime Minister Jawaharlal Nehru famously being lobbied by Albert Einstein to support the resolution. India was in a similar situation as Israel at the time. Both countries were emerging from British colonial rule, and faced nationalist and religious conflict over proposed partitions. Nevertheless, Indian leaders were concerned with maintaining relations with the Muslim world, especially following their own messy partition with Muslim-majority Pakistan.
But the events of 1947 are in the past. In subsequent decades, India and Israel formed a deep bilateral partnership centered on defense and technology. In July, Indian Prime Minister Narendra Modi will become the first Indian head of state to visit Israel as the countries mark 25 years of diplomatic relations.
In recent months, India and Israel have signed new defense deals worth billions. In February, Modi approved the $2.5 billion purchase of an advanced anti-aircraft system, and another $1.5 billion in defense deals are set to be completed ahead of Modi’s visit.
According to the Hindustan Times, “Though Israel is among the top four military hardware suppliers to India, with more than $1 billion in annual sales to New Delhi, the Modi government is keen to ensure that this visit is not focused on defense ties alone, but encompasses long-term economic and technological cooperation, resulting in a free-trade agreement.”
Australia
Australia was one of four British Commonwealth countries voting for the creation of Israel, the others being South Africa, New Zealand and Canada. At the time, Australian External Affairs Minister H.V. Evatt chaired the U.N. committee that recommended acceptance of 1947’s partition plan.
In May 1949, when Israel was accepted as a U.N. member, Evatt—who was serving as president of the U.N. General Assembly—welcomed the Israeli delegation, saying, “I look forward to the time when the wounds of the peoples of the Middle East will be healed, when we shall find friendships and, indeed, comradeship among these peoples.”
Netanyahu in February embarked on a five-day visit to Australia, the first such trip for an Israeli prime minister, amid a growing focus on building Israel’s relations with the Asia-Pacific region.
“Australia and Israel have a strong relationship, which is evident in a number of ways—not least of which has been Australian support for Israel politically, with the economic ties growing dramatically in recent years,” Jeremy Jones, director of international affairs for the Australia/Israel & Jewish Affairs Council, told JNS.org during Netanyahu’s visit.
Jones added, “It is not unreasonable to think that the development of Israel’s ties with Asia has given Australia—with its geographic, economic and political ties with Asia—a higher significance in Israeli diplomatic thinking.”
This article was originally published at JNS.org. Used with permission.