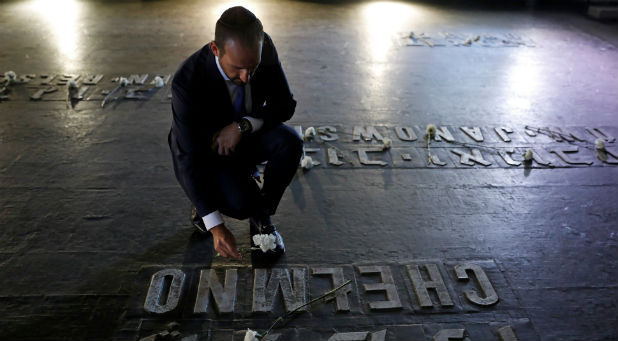 Anti-Semitic incidents, from bomb threats and cemetery desecration to assaults and bullying, have surged in the United States since the election of President Donald Trump, and a “heightened political atmosphere” played a role in the rise, the Anti-Defamation League said on Monday.
A sharp increase in the harassment of American Jews, including double the incidents of bullying of schoolchildren and vandalism at non-denominational grade schools, was cited in the ADL’s “Audit of Anti-Semitic Incidents.”
Overall, the number of acts targeting Jews and Jewish institutions rose 34 percent in 2016 to 1,266 in 2016 and jumped 86 percent in the first quarter of 2017, the ADL said.
“The 2016 presidential election and the heightened political atmosphere played a role in the increase,” the ADL concluded in its report.
White House spokesman Michael Short said Trump consistently called for an end to anti-Semitism, as recently as Sunday in a speech on Yom HaShoah, Israel’s Holocaust Remembrance Day.
“We must stamp out prejudice and anti-Semitism everywhere it is found,” Trump told the World Jewish Congress Plenary Assembly in New York.
Trump had been criticized for waiting until late February to deliver his first public condemnation of anti-Semitic incidents, previously speaking more generally about his hope of making the nation less “divided.”
He later called such incidents “horrible … and a very sad reminder” of the work needed to root out hate, prejudice and evil.
The majority of anti-Semitic incidents were not carried out by organized extremists and should be seen in the context of a general resurgence of U.S. white supremacist activity, said Oren Segal, director of the League’s Center on Extremism.
“Anti-Semitism is not the sole domain of any one group, and needs to be challenged wherever and whenever it arises,” Segal said in a statement.
Among 34 election-linked incidents cited by the ADL was graffiti posted in Denver in May 2016 that exhorted readers to “Kill the Jews, Vote Trump.”
The League also noted an incident from November when an assailant told a victim in St. Petersburg, Florida: “Trump is going to finish what Hitler started.”
Technology that makes it easier to conduct harassment anonymously contributed to the rising numbers, the ADL said.
Michael Ron David Kadar, an 18-year-old Israeli-American, has been charged with making dozens of bomb threats to Jewish community centers in the United States earlier this year.

© 2017 Thomson Reuters. All rights reserved.
Leaders are readers! Subscribe now and get 3 magazines for the price of 1. Get Ministry Today, Charisma and SpiritLed Woman all for $24. YES – Sign me up!
3 Reasons Why you should read Life in the Spirit. 1) Get to know the Holy Spirit. 2) Learn to enter God’s presence 3) Hear God’s voice clearly! Click Here to draw closer to God!
Did you enjoy this blog? Click here to receive it by email.
Love For His People, Inc. founded in 2010 by Steve & Laurie Martin. Charlotte, NC USA