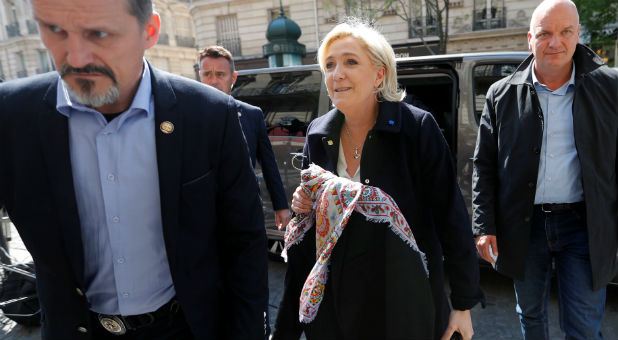 Marine Le Pen and the Jews of France: It’s Complicated, but Clear

Should French Jews fear the potential election of Marine Le Pen? Should they leave France if she wins the presidency, per the advice of a leading rabbi? Is she rightly characterized as a “hate” candidate, following in the footsteps of her Holocaust-denying father? And is she right in calling for France’s Jews to make certain sacrifices, since she will ask Muslims to do the same?
The short answer is: It’s complicated but clear. Let me explain why.
According to Francis Kalifat, president of the CRIF umbrella group of French Jewish communities, Le Pen is a “candidate of hate” and Jews should unite around Emmanuel Marcon, even if they differ with his policies. That’s how dangerous Le Pen will be for France’s Jews.
Speaking from Moscow, Russian Chief Rabbi Berel Lazar warned that France is “heading toward radicalization.” He stated plainly that, “If Marine Le Pen is elected president of France, the Jews must leave.”
Are these men overreacting?
Let’s remember that Marine Le Pen is not her father, Jean-Marie Le Pen, founder of the right-wing National Front Party, now led by Marine.
Jean-Marie has been fined multiple times for Holocaust denial, once saying, “If you take a 1,000-page book on World War II, the concentration camps take up only two pages and the gas chambers 10 to 15 lines. This is what one calls a detail.”
But Marine Le Pen has thrown her father out of the party and denounced his views. Why should she be held accountable for her father’s transgressions?
Let’s also remember that the threat of radical Islam is real and requires some extreme measures. That’s why Le Pen recently tweeted, “Hate preachers must be expelled, the Islamist mosques closed.” (Note that “Islamist” means “radical Muslim.”)
Shouldn’t French Jews embrace this kind of thinking, since they have often been targets of Islamic violence? Or is it possible that French Jews skew liberal by default, just as American Jews do, meaning that they will not side with a strong nationalism even when it’s in their best interest?
This is why I say that the relationship between Marine Le Pen and French Jews is complicated. She is not her father, and she has expelled other anti-Semites from her party. Perhaps her policies would be in the best interest of France’s Jews?
I think not. As much as radical Islam requires a firm hand of resistance, Le Pen presents real problems for French Jews.
As noted by the JTA, “Le Pen recently called for banning the wearing of the kippah in public and for making it illegal for French nationals to also have an Israeli passport—steps she said were necessary because of the principle of equality in order to facilitate similar limitations on Muslims.
Le Pen has said radical Islam is a ‘threat on French culture’ and has called on Jews to make certain ‘sacrifices’ in order to fight jihadism.”
And herein lies the problem: She is treating Jews and Muslims alike to the point of penalizing Jews for the crimes of radical Muslims.
Why shouldn’t French Jews be allowed dual citizenship? Has their solidary with Israel over the decades damaged the people of France? Has it made them any less loyal citizens? Have they plundered France to aid and abet Israel?
And why shouldn’t a Jewish man be allowed to wear a head-covering? And what about his beard, if that is part of his religious identification? Must he shave his beard too? And is Le Pen requiring Catholic priests and nuns not to wear their ritual attire? For that matter, is she requiring Catholics not to wear crosses? If not, why single out religious Jews? Why not deal with radical Muslims as such without penalizing everyone else (including moderate Muslims)?
Where are the Jewish terrorists in France? How many have murdered policemen in cold blood while shouting out pro-Israeli slogans? How many have rammed trucks into civilians, slaughtering dozens? How many have massacred scores of concert-goers? How many have attacked restaurants and killed as many diners as they could? How many have broken into magazine headquarters and butchered anti-Jewish journalists?
As Amiel Unger wrote in an op-ed for HaAretz, “Marine Le Pen’s instinct is right: fighting an Islamic takeover requires France to shed its guilt and shame over its past. But her desire for a foolish ‘consistency’ means Vichy and Jewish identity are also included.”
All too often in Jewish history, the Jewish people have been scapegoated whenever hard times befell the countries in which they lived. It’s all because of the Jews! The Jews poisoned the wells and caused the Black Plague! The Jews caused the economic collapse of Germany! It’s the fault of the Jews!
Should extreme nationalism prevail in France, it could be dangerous for France’s Jews. “Why can’t they just be French? Why must they insist on being Israelis too? Why must they insist on being Jews? Either they shed their identity, or they go.”
Ideally, France must resist the Islamization of their country and deal forcefully with radical Islam. But they must do it without penalizing their loyal Jewish population.
If Le Pen wins the election, they should be on their guard.

Dr. Michael Brown (www.askdrbrown.org) is the host of the nationally syndicated Line of Fire radio program. His latest book is Breaking the Stronghold of Food. Connect with him on Facebook or Twitter.
Leaders are readers! Subscribe now and get 3 magazines for the price of 1. Get Ministry Today, Charisma and SpiritLed Woman all for $24. YES – Sign me up!
3 Reasons Why you should read Life in the Spirit. 1) Get to know the Holy Spirit. 2) Learn to enter God’s presence 3) Hear God’s voice clearly! Click Here to draw closer to God!
Did you enjoy this blog? Click here to receive it by email.
Love For His People, Inc. founded in 2010 by Steve & Laurie Martin. Charlotte, NC USA