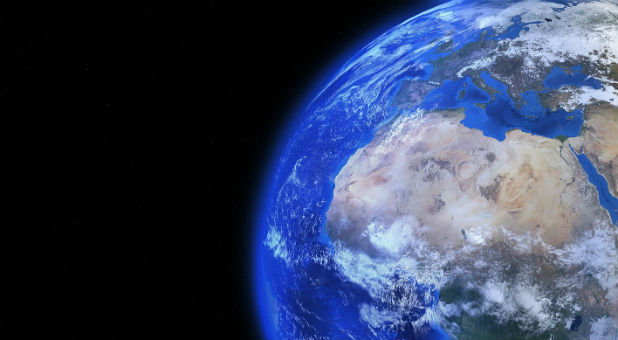 This Must-See Film Verifies the Genesis Account of Creation

4/19/2017 JESSILYN JUSTICE  CHARISMA NEWS
Join us on the new C-Pop podcast where Taylor and Jessilyn discuss, debate and sometimes deride pop culture with a strong sense of humor and a focus on Christ. Listen at charismapodcastnetwork.com.
After the successful one-night theatrical event that netted two encore performances, the documentary feature Is Genesis History? will be available on DVD, VOD and for church licensing on April 11. Through on-location interviews with veteran scientists, Is Genesis History? examines the two conflicting histories on the origins of the earth and the universe. With an immense body of new research and discoveries currently available, Is Genesis History? unpacks and presents positive, evidence-based arguments for the credibility of the Bible as accurate history.
“People don’t need to feel unscientific in believing God’s Word as it is written. We wanted the film to show that there are smart, professional, respected scientists who are working in the field who have seen the evidence firsthand and believe that the evidence supports the historical narrative of Genesis,” explains Dr. Del Tackett, host in the movie. “People can walk away from Is Genesis History? with confidence, knowing that what God has given us in Scripture is true.”
Using an unconventional theatrical release, the film launched as a one-night only theatrical event through Compass Cinema and Fathom Events. Over 143,000 people purchased tickets for the premiere event, making Is Genesis History? the highest grossing and #1 per-screen average film in the country on February 23 (BoxOfficeMojo.com). This outpouring of support launched two additional evenings of encore screenings that ultimately earned the film a whopping $2.7M in just three evenings.
Producer Thomas Purifoy Jr said, “We knew people were innately interested in the events recorded in Genesis, so we were confident in the subject matter. What we were surprised by was how many theaters sold out, added screens, then sold out again. Documentaries aren’t supposed to do well in theaters. Is Genesis History? is a film that is continually breaking the mold.”
Critics agree:

“An engrossing primer on why we can feel confident believing the Bible’s account of creation.” —World Magazine
“‘Is Genesis History?’ is a very-informative documentary, definitely not dry but very interesting to watch.” —Dove.org
“A Must-See Movie” —radio host, World Net Daily and Town Hall columnist Jerry Newcombe
“Fascinating—and quite beautiful—from opening to closing, Is Genesis History? is a necessary multi-tool in the kit of anyone who hopes to believe more deeply in—and communicate more knowledgeably about—the possibility of a young Earth and the reliability of the Bible‘s creation account.” —Crosswalk.com

In the documentary, Tackett introduces viewers to experts in theology, geology, paleontology, biology, archaeology and astronomy. They each spend time looking at scientific data from the perspective of the history recorded Genesis. Tackett’s journey spans the continent, exploring answers to compelling questions such as the sudden extinction of the dinosaurs, the timeline of natural history and the reality of a global flood.
Churches and para-church organizations provided incredible support for Is Genesis History?, prompting the filmmakers to make church licensing available as quickly as possible. On April 11, the film’s website, http://www.isgenesishistory.com, will provide churches and organizations the opportunity to register to host individual screenings of this compelling documentary plus download a plethora of additional support materials, including video devotionals, a church prep booklet, online Bible studies and more.
The DVD, Blu-ray and VOD will include three bonus features from additional scientists (Larry Vardiman, Douglas Kelly and Stuart Burgess), examining the topics of Climate Change, the History of Creation in the Church, and the Design of the Universe. Is Genesis History? will be available at online retailers and on thehttp://www.isgenesishistory.com website.