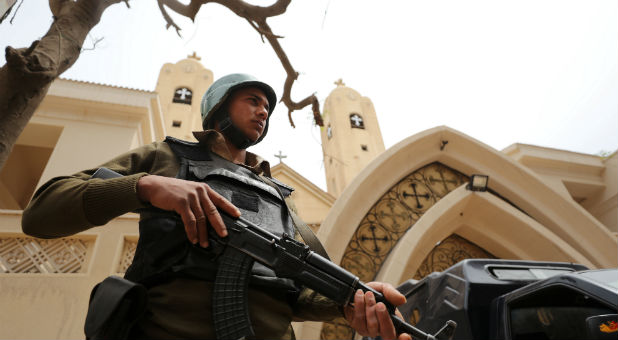 The 5 Attacks on Churches This Week No One Told You About
4/11/2017 ANTO AKKARA/WORLD WATCH MONITOR
Join us on our podcast each weekday for an interesting story, well told, from Charisma News. Listen at charismapodcastnetwork.com.
India’s Prime Minister Narendra Modi has been criticized for condemning the Palm Sunday attacks on churches in Egypt but failing to condemn attacks in his own country.
On the same day that two churches were bombed in Egypt, five churches in India— in five different states—were targeted (details below).
Church groups have called for extra security to be provided for churches in the run-up to Easter, and for the perpetrators to be brought to justice.
“Prime Minister Narendra Modi condemned the Egypt bombings but is not bothered about the blunt intimidation and assaults on Christians under his care,” Rev. Roger Gaikwad, general secretary of the National Council of Churches in India, told World Watch Monitor.
“Modi as usual wants to maintain a good international image. Such a statement (condemning attacks in Egypt) also bolsters the stereotype of Muslims as terrorists and Christians as people who are attacked because their proselytizing activities are inviting problems for themselves.”
The Evangelical Fellowship of India released a statement today (April 11), in which it criticized the “targeting of Christians on special days of worship, such as Palm Sunday” as “condemnable”.
“We urge the respective state governments and the central (federal) government to not only take note of these violations, but also to take action to curtail the non-state actors who function with impunity,” the statement read.
“It is important, especially now as we are in the Passion Week, for, going by the trends so far, it seems the incidents may escalate during Good Friday and Easter. It does not reflect well on the world’s largest democracy, if incidents like these continue to hound religious minorities.
“We also request that the state machinery be held accountable and responsible for enforcing the rule of law, so that minorities can live in peace and without fear,”
Four of the five states in which the incidents took place are ruled by the Hindu-nationalist BJP—Modi’s party. Meanwhile, so-called “anti-conversion laws”—which on the face of it protect against forced conversions but in reality discriminate against minority groups by forbidding them from any evangelism—are in force in the central state of Madhya Pradesh, where one attack took place, while they are also soon likely to be introduced in the western state of Rajasthan, where another incident occurred. Such laws also used to be in force in another of the affected states—the southern state of Tamil Nadu—but were repealed after the ruling party lost all its parliamentary seats.
The National Council of Churches in India said the sudden spurt in anti-Christian violence is a “signal” that Hindu nationalist groups like the BJP and RSS “are going to use the communal card in the most blatant way”—by teaching majority-Hindus that minorities like Christians and Muslims present a threat to the Hindu nation.
Activist John Dayal added: “The rash of violence against Christians, disrupting Palm Sunday prayers, speaks of a heightened impunity, and, we suspect, a more direct collusion of police and local authorities.”
What Happened?
The information below, detailing five incidents in five different states on Palm Sunday (April 9), was provided by the Evangelical Fellowship of India.
Madhya Pradesh (Sitabedi village, Khandwa district)
Hindu extremists accompanied by police personnel disrupted a church service. Police arrested the pastors and their wives, and other Christians, and took them to the local police station. Three pastors were detained under the under the Madhya Pradesh Freedom of Religion Act (“anti-conversion law”), but others were released that evening.
Haryana (Kaithal)
Hindu extremists disrupted the church service led by a pastor named Yashpal. The group “threatened and manhandled” the Christians and filed an official complaint at the local police station, alleging Christians had been forcing people to convert. Police then took the Christians into custody. The local inspector said it had been “protective custody” and that they were released after the allegations against them were found to be baseless.
Uttar Pradesh (Jahanpur village, Ghazipur district)
A mob beat up Krishna Paul, the leader of Believers Church, and handed him over to the police. He was released after local Christian leaders intervened and spoke to the police.
Rajasthan (Sri Ganganagar)
Hindu extremists disrupted the service at the church of God, and church leader Saji Mathew was arrested and taken into police custody, along with seven other Christians. Local villagers, with the help of a Hindu priest, had complained to the village chief that Christians had been “engaging in conversions.” The village chief then signed a complaint and gave it to the local police, who arrested the Christians. After other local Christian leaders pleaded with the police to release the Christians, they were set free later that night.
Tamil Nadu (Keeranur, Dindigul district)
Government officials disrupted private prayers at the house of a man named Gunasekaran. The officials took video clips and pictures of people praying and then told them to stop. They also told them to ask permission from the District Collector before praying again in the house. Gunasekaran’s extended family (about 20 people) have gathered in his house every Sunday for the last 24 years, for private prayers. Gunasekaran was forced to sign a piece of paper and told to report to the local government office the following day. The Evangelical Fellowship of India noted that the prayers are attended only by family members and not by other members of the public, and that no loudspeaker system is used during the prayers.

This article originally appeared on World Watch Monitor.
Leaders are readers! Subscribe now and get 3 magazines for the price of 1. Get Ministry Today, Charisma and SpiritLed Woman all for $24. YES – Sign me up!
3 Reasons Why you should read Life in the Spirit. 1) Get to know the Holy Spirit. 2) Learn to enter God’s presence 3) Hear God’s voice clearly! Click Here to draw closer to God!
Love For His People, Inc. founded in 2010 by Steve & Laurie Martin. Charlotte, NC USA