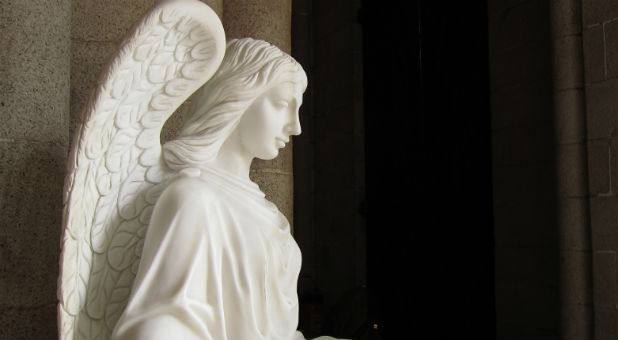 4/6/2017 JENNIFER LECLAIRE  CHARISMA NEWS
Jennifer LeClaire is now sharing her reflections and revelations through Walking in the Spirit. Listen at charismapodcastnetwork.com.
Most Americans believe in guardian angels. In fact, more than half of all adults—including 20 percent who say they are not religious—absolutely believe a guardian angel has protected them during their life. That’s according to a Baylor University for Studies on Religion survey.
“A lot of times when people hear about angels, they think about these cartoon figures with wings, halos and harps,” John Ortberg, senior pastor at Menlo Park Presbyterian Church in California, told ABC News. “I don’t think that’s the idea. I think the idea is that we live in a spiritual reality and these are spiritual beings that God’s created, and we call them angels.”
Psalm 91 points to the reality of guardian angels. The passage assures us God will command His angels to guard us in all our ways. Psalm 34 tells us angels encamp around those who fear Him. And Matthew 18:10 also suggests we have guardian angels. But there is still some debate over this in Christian circles.
Some believe we have one angel. Others believe we have two. Still others believe we have many angels—even angels on assignment for specific reasons or angels who help us complete God-given assignments. Matthew 18:10 would suggest we have at least two:
“See that you do not despise or think less of one of these little ones, for I say to you that their angels in heaven [are in the presence of and] continually look upon the face of My Father who is in heaven” (AMP).
The Message translation reads: “Watch that you don’t treat a single one of these childlike believers arrogantly. You realize, don’t you, that their personal angels are constantly in touch with my Father in heaven?”
Personal angels. Guardian angels. Whatever you want to call them, we have at least two.
John Calvin, from where we get modern-day Calvinism, disagrees that angels are assigned to us:

The interpretation given to this passage by some commentators, as if God assigned to each believer his own angel, does not rest on solid grounds. For the words of Christ do not mean that a single angel is continually occupied with this or the other person; and such an idea is inconsistent with the whole doctrine of Scripture, which declares that the angels encamp around (Ps. 34:7) the godly, and that not one angel only, but many, have been commissioned to guard every one of the faithful. Away, then, with the fanciful notion of a good and evil angel, and let us rest satisfied with holding that the care of the whole Church is committed to angels, to assist each member as his necessities shall require (Source: Commentary on a Harmony of the Evangelists Matthew, Mark, and Luke, on Matthew 18:10).

But Tim Sheets, author of Angel Armies, tells the story of an angel of the Lord who accompanies the apostolic assignment on his life. Once at a conference while he was praying, he heard “Mahanaim” called out from behind him. When he looked behind him, there was nobody there. But he knew the angel was there. William Branham claimed he had an angel of healing assigned to work with him in the ministry. Many others have expressed an angel that has come alongside them to help them on specific ministry exploits.
So what’s the answer? We may never know fully while we walk this earth. The broader point, though, is not to get caught up in angel controversies, to worship God and trust that if you need angelic assistance, He will send it whether it’s your guardian angels or angels for a specific assignment.

To learn more about the angels of abundant harvest, check out angelsprophecy.com.
Jennifer LeClaire is senior editor of Charisma. She is also director of Awakening House of Prayer in Fort Lauderdale, Florida, co-founder of awakeningtv.com, on the leadership team of the New Breed Revival Network and author of several books, including The Next Great Move of God: An Appeal to Heaven for Spiritual Awakening; Mornings With the Holy Spirit, Listening Daily to the Still, Small Voice of God; The Making of a Prophet and Satan’s Deadly Trio: Defeating the Deceptions of Jezebel, Religion and Witchcraft. You can visit her website here. You can also join Jennifer on Facebook or follow her on Twitter. Jennifer’s Periscope handle is @propheticbooks.
Leaders are readers! Subscribe now and get 3 magazines for the price of 1. Get Ministry Today, Charisma and SpiritLed Woman all for $24. YES – Sign me up!
3 Reasons Why you should read Life in the Spirit. 1) Get to know the Holy Spirit. 2) Learn to enter God’s presence 3) Hear God’s voice clearly! Click Here to draw closer to God!
Did you enjoy this blog? Click here to receive it by email.
Did you like this article? You’ll enjoy Jennifer LeClaire’s book, Mornings With the Holy Spirit: Listening Daily to the Still Small Voice of God
Love For His People, Inc. founded in 2010 by Steve & Laurie Martin. Charlotte, NC USA