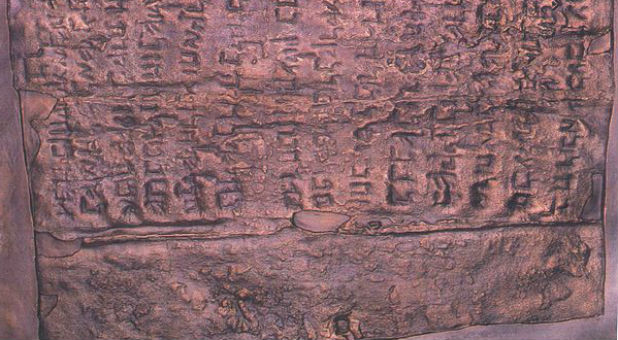 3/31/2017 BREAKING ISRAEL NEWS  CHARISMA NEWS
A Noahide and former criminal investigator believes he has deciphered an enigmatic 2,000-year-old message known as the Dead Sea Copper Scroll, concluding that it is a treasure map leading to the hiding place of the lost temple utensils. But while archaeological experts agree with his theory, the political complications of the region make it unlikely that the treasures will be revealed any time soon.
The Copper Scroll, discovered in 1952 near Qumran on the shores of the Dead Sea, is an archaeological mystery. Though considered part of the famous Dead Sea Scrolls, the Copper Scroll differs in that it was found in situ—on location—and that unlike the other Dead Sea Scrolls, written on papyrus, the Copper Scroll, as its name suggests, was inscribed into a thin sheet of copper. The Hebrew used in the scroll also indicates it was written in a later period than the Dead Sea Scrolls.
There is a great deal of controversy surrounding the Copper Scroll. While the other Dead Sea Scrolls contain religious and biblical works, the Copper Scroll is simply a list of 64 locations and corresponding amounts of gold and silver.
The predominant opinion states that the gold and silver listed in the scroll was money accumulated from the Bar Kochba Revolt against the Romans after the destruction of the second temple. But the expert opinion has a glaring flaw: One of the locations is described as holding priestly vestments.
At first glance, Jim Barfield seems like the most unlikely person to unlock the mystery of the temple vessels’ hiding place. He is not Jewish, does not speak Hebrew and is not an archaeologist. But Barfield’s other qualifications enabled him to unravel a mystery that has baffled archaeologists for over 50 years.

Read more at breakingisraelnews.com.
Leaders are readers! Subscribe now and get 3 magazines for the price of 1. Get Ministry Today, Charisma and SpiritLed Woman all for $24. YES – Sign me up!
3 Reasons Why you should read Life in the Spirit. 1) Get to know the Holy Spirit. 2) Learn to enter God’s presence 3) Hear God’s voice clearly! Click Here to draw closer to God!
Did you enjoy this blog? Click here to receive it by email.
Love For His People, Inc. founded in 2010 by Steve & Laurie Martin. Charlotte, NC USA