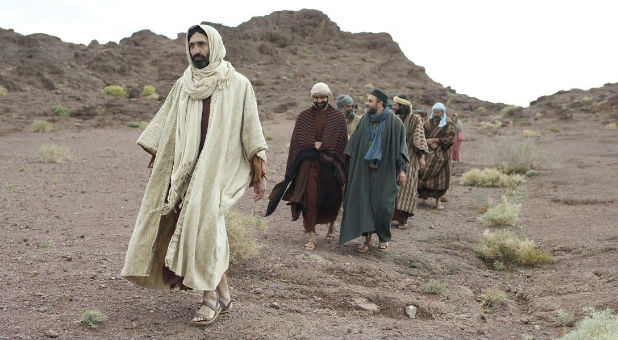 3/30/2017 DEWAYNE HAMBY  CHARISMA NEWS
Join us on the new C-Pop podcast where Taylor and Jessilyn discuss, debate and sometimes deride pop culture with a strong sense of humor and a focus on Christ. Listen at charismapodcastnetwork.com.
With so much material to choose from, presenting the full story of Jesus Christ on screen has always been a difficult task for filmmakers. The makers of the Lumo Project series, however, decided to take on the challenge through four separate movies based solely on the biblical text. Billed as a word-for-word adaptation of the gospel narratives, the latest release, The Gospel of Mark, recently released to home video in the United States following The Gospel of John.
According to David Beatty, the films’ director, the grand scope originated thousands of years ago, as the life of Christ spilled out over four separate biographies by four separate writers, each with his own perspective.
“It’s a bit like having four people witness a crime or a car crash or something,” he said. “They’ve all seen the same event, but they have four slightly different perspectives to it. That gives them all a unique point of view. I think having the opportunity to do that four times, I don’t think there’s anywhere else you can do that.”
The release dates are being spaced out in order to let each film have its own audience before all joining together as one series. The director chose The Gospel of John to lead the series and then The Gospel of Mark to follow because of their differences.
“John, the last gospel to be written down, according to scholars, it’s a very cerebral gospel, a very philosophical gospel,” he said. “It’s full of very long passages where Jesus gives very long speeches explaining what He’s doing and what’s going through Jesus’ mind. It also comes in very late to Jesus’ story.”
Following that, he said, The Gospel of Mark “has got the whole story.”
“It’s very fast-paced, very action-packed,” he said. “It’s almost as if Jesus is a superhero. He goes through event after event after event, healing, healing, some sort of ministry, healing, whatever. It’s a very different feel to it.”
As the life of Christ plays out on screen, Beatty believes it harkens back to the original oral tradition of the gospels, as they were passed down for many years before being put to paper. Those gospels were performed as they were told, giving more of an interactive and living experience rather than reading words on paper.
“You’re actually experiencing them with other people,” he said. “That was the motivation in doing this.”
The films were shot in such a way that narration is layered over top of the spoken dialogue, making dubbing for various languages an easier process. The makers are aiming to make the films available in various languages and are now actively working on dubbing in Brazilian-Portuguese, French, Danish, German, Dutch, Spanish and Finnish.
Underneath the top narration, Beatty was faced with a dilemma. Not having the time or resources to teach the cast Aramaic, but also forgoing any modern languages that would “distract” from the biblical text, he found a middle ground.
“We created our own language,” he said. “It’s a bit of method acting, really. I provided the key cast with as many Aramaic words or as many Aramaic-sounding words as possible, and then they could use those to create their own language. What they would do is learn their lines, which would be the lines that are the Bible for whatever scene they were doing, and then literally translate those into this mad- up language, if you like.”
The Gospel of Mark is available from Lionsgate through DVD at Walmart, digital HD and On Demand. The DVD includes behind-the-scenes bonus features, including “Building Jerusalem,” “Composing the Gospels,” “Filming the Gospels” and more.

DEWAYNE HAMBY is a communications specialist and longtime journalist covering faith-based music, entertainment, books and the retail industry. He is also the editor of the White Wing Messenger, director of communications for the Church of God of Prophecy and author of the book Gratitude Adjustment. Connect with him at www.dewaynehamby.com or on twitter – @dewaynehamby.
Leaders are readers! Subscribe now and get 3 magazines for the price of 1. Get Ministry Today, Charisma and SpiritLed Woman all for $24. YES – Sign me up!
3 Reasons Why you should read Life in the Spirit. 1) Get to know the Holy Spirit. 2) Learn to enter God’s presence 3) Hear God’s voice clearly! Click Here to draw closer to God!
Love For His People, Inc. founded in 2010 by Steve & Laurie Martin. Charlotte, NC USA