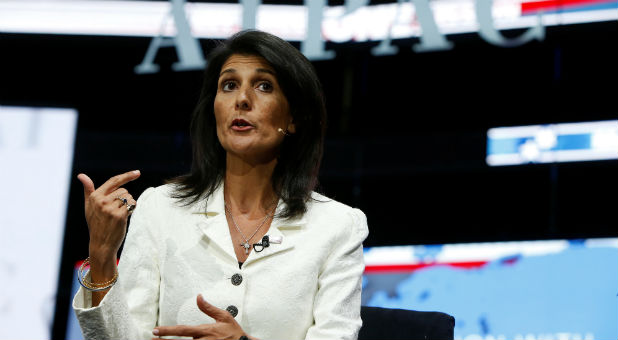 3/29/2017 JESSILYN JUSTICE  CHARISMA NEWS
U.S. Ambassador to the United Nations Nikki Haley said she would longer stand for “Israel-bashing,” as there is a “new sheriff in town.”
Haley detailed a recent meeting she had at the United Nations in which the body discussed their disregard for Israel.
You know, I was confused. It was totally bizarre because in my first month, talking about the Middle East, there’s a lot to talk about. And whether you’re talking about Hezbollah or ISIS, all the issues in Syria, which is a problem, that’s what I expected us to talk about. I didn’t expect an Israel-bashing session,” Haley said. “And literally, listening to each member say the same thing over and over again, I knew they said it was bad, but until you hear it and you see it, you just can’t comprehend how ridiculous it is.”
But she’s not giving up.
“For anyone who says you can’t get anything done at the U.N., they need to know there is a new sheriff in town. I’m not there to play games and what I wanted to make sure of is that the United States started leading again,” the former South Carolina governor told the American Israel Public Affairs Committee (AIPAC) conference.
Haley rebuked the U.N. for its anti-Israel bias, siding with Israeli Prime Minister Benjamin Netanyahu, who says the world regards the country unfairly.
Haley said the U.N.’s resolution to abstain from the two-state solution vote in February was a “kick in the gut” for her and other Israel allies.
“I wear heels. It’s not for a fashion statement. It’s because if I see something wrong, we’re going to kick them every single time. So how are we kicking? We’re kicking by, number one, putting everybody on notice, saying that if you have our back—we’re going to have the backs of our friends, but our friends need to have our back too. If you challenge us, be prepared for what you’re challenging us for, because we will respond,” Haley said.
“The next thing we did was we said, the days of Israel-bashing are over. We have a lot of things to talk about. There are a lot of threats to peace and security. But you’re not going to take our No. 1 democratic friend in the Middle East and beat up on them. And I think what you’re seeing is they’re all backing up a little bit.”
Haley’s remarks were given at the American Israel Public Affairs Committee Conference. Vice President Mike Pence used his speech at the conference to reaffirm his support in the Trump administration relocating the U.S. Israel embassy to Jerusalem.