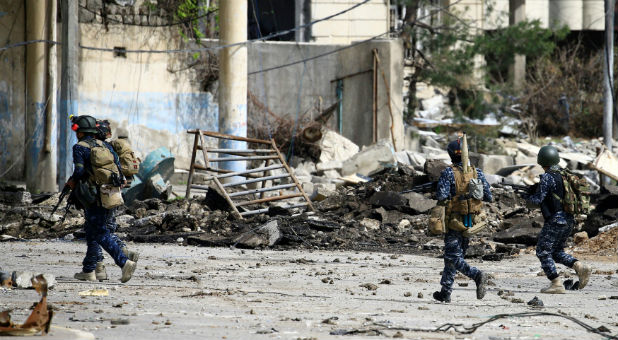 At 8,019 square miles, Israel is roughly the same size as New Jersey, America’s fifth-smallest state. Think about how small that actually is. You can drive from one side of Israel to the other in as little as 90 minutes. And yet, there it sits, surrounded by geopolitical and ideological threats on all sides.
Hamas to the west of Israel in Gaza.
Hezbollah to the north of Israel in Lebanon.
ISIS to the east of Israel in Syria and Iraq
ISIS to the south of Israel in Egypt’s Sinai Peninsula.
Most recently, coalition forces are battling to retake Mosul after more than two years under the control of ISIS. With the terrorists now on the defensive, it’s critically important that we don’t repeat the mistakes of the past by assuming this means victory.
Let’s recap a bit of recent Middle Eastern history to prove that it doesn’t.
Osama Bin Laden, born in Pakistan, traveled to join the Mujahideen resistance in the Soviet war in Afghanistan in the ’80s. In the ’90s, Bin Laden moved to Sudan, where he leveraged the weak infrastructure of the chaotic East African nation to establish the Al Qaeda network and eventually—after moving back to Afghanistan—launched the largest terrorist attack in American history before being killed in 2011.
Abu Musab al-Zarqawi, born in Jordan, also traveled to Afghanistan to fight the Soviets. After spending a few years in a Jordanian prison, he returned to leverage the lawlessness of Afghanistan, where he started training jihadis. After Afghanistan was invaded by U.S. forces after 9/11, Zarqawi moved into the lawless region of northern Iraq, where he eventually became the mastermind behind the insurgency which threw Iraq into a bloody sectarian war and nearly toppled the nascent, U.S.-backed Iraqi government. Zarqawi was finally killed in 2006, and he remains the father of ISIS.
Abu Bakr al-Baghdadi, born in Iraq, took over Zarqawi’s old network in Iraq in 2010. This time, it was the chaos in Syria that would provide the jihadis a prime opportunity to regroup and launch their most ambitious plan to date: the creation of a geographical caliphate complete with Sharia law, schools, hospitals, revenue from oil and land. This was the creation of ISIS, a fearsome military presence that has been continually reinforced by foreign fighters flooding Syria and Iraq to wage jihad. Baghdadi is still at large.
These three men are merely representatives of a growing and evolving, existential threat to the very existence of Israel and her allies. And candidly, they only represent one branch of the ideological threat, namely Sunni radicals. Iran’s Shiite regime funnels billions of dollars into Lebanon’s Hezbollah (also Shiite) and to Hamas in Palestine.
When Mosul is liberated, it will certainly mark a victory for freedom-loving peoples everywhere as well as the citizens of that terrorized city. But let us not kid ourselves. The truth is, like a virus, radical Islamic terrorists will continue to infiltrate other chaotic and lawless nations to spawn their strain of hatred for Israel and the West all over again. Next, could it be Libya or Somalia? Maybe it will be a region like the northeast of Nigeria or Kenya?
You see, it’s important to properly frame recent history so that we can look clear-eyed into the future, and this is what it reveals: If radical Islamic terrorism is the virus, then stability is the antibody.
And it’s a critical moment. Slowly, Middle Eastern regimes that have quietly funded and encouraged jihad from the safety of their palaces and oil rich treasuries, have come to realize that they, too, are viewed as enemies and apostates by terrorists like ISIS. Should the opportunity present itself, jihadists will infiltrate whatever nation they can, killing innocent civilians and toppling regimes in order to establish their idea of a true caliphate–spreading instability and chaos with it.
But they are no match for stable governments, working in unison and sharing intelligence to disrupt terrorist networks and root out jihad in all its forms. This is exactly why Israel is the key to the Middle East’s current crises. Israel possesses the single greatest surveillance gathering network in the region; boasts the strongest military might; enjoys the most robust economy; and is the region’s only stable democracy. It’s common knowledge that for all of these reasons, Israel is the best friend of the United States in the Middle East, but what’s less understood—while they would never admit it—is that Israel is also the ad-hoc best friend of all its Arab neighbors that the terrorists would also aim to destroy from the inside out.
Israel may be surrounded by threats on all sides (literally), but so, too, are her neighboring nations surrounded themselves by jihadis. Some of them have already been infiltrated by them. When Mosul is reclaimed, the remnants of the virus of ISIS will scatter to the wind. Where they will ultimately end up, no one yet knows.
Let us hope and pray that we finally have consensus and the political will throughout the Middle East, to rip this barbaric and hellish virus up from its roots once and for all.
But, trust me, without Israel it would be worse—maybe even apocalyptic.

Dr. Michael D. Evans is a No. 1 New York Times best-selling author and head of several prominent international non-profit organizations in the U.S., Netherlands, and Israel, including the Friends of Zion Heritage Center and Museum in Jerusalem.
Leaders are readers! Subscribe now and get 3 magazines for the price of 1. Get Ministry Today, Charisma and SpiritLed Woman all for $24. YES – Sign me up!
3 Reasons Why you should read Life in the Spirit. 1) Get to know the Holy Spirit. 2) Learn to enter God’s presence 3) Hear God’s voice clearly! Click Here to draw closer to God!
Did you enjoy this blog? Click here to receive it by email.
Love For His People, Inc. founded in 2010 by Steve & Laurie Martin. Charlotte, NC USA