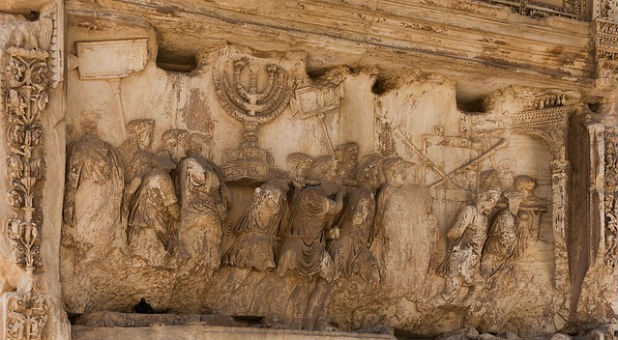 This 2,000-Year-Old Mystery Is Now Uniting Jews and Christians

The Vatican and Rome’s Jewish community are teaming up to celebrate a symbol of Judaism depicted on one of the world most famous historical artifacts, but lost to the world for 2,000 years.
The menorah was a seven-branched candelabra made of solid gold that served as one of the sacred vessels in the Holy Temple.
In 70 A.D., the Romans destroyed Jerusalem and looted the temple of its treasure, including the menorah, bringing many of the artifacts back to Rome.
This triumphant procession is depicted on the Arch of Titus in Rome.
The location of that menorah has been the subject of intense speculation for centuries as it is both historically and culturally important.
According to some scholars, it remained in Rome until the city was looted by Vandals in 455. Others say it was destroyed in a fire. Still, there are some accounts that it was taken to Carthage and then modern-day Istanbul.
In 1818, the Tiber River was searched for precious objects, in part because of a report that the menorah sank in a shipwreck.
This new exhibit, “Menorah: Worship, History, Legend,” includes about 130 artifacts, including a 2,000-year-old stone block found by archaeologists in an Israeli synagogue.
“This is a historic event,” said Ruth Dureghello, the president of Rome’s Jewish community. The menorah has connections to Rome “so such an important exhibit could only start here,” she added.
The purpose of the exhibit is to trace the history of the menorah and its influence on Christian art and artifacts.
Because there are close ties between the Jewish and Christian faiths, menorahs have been used in churches as liturgical items according to the deputy director of the Vatican Museum and one of the curators of the menorah exhibit.
“Menorah: Worship, History, Legend” will open in May and will be presented at the Vatican Museums and at Rome’s Jewish Museum.

This article originally appeared at cbnnews.com.
Copyright The Christian Broadcasting Network, Inc., All rights reserved.
Leaders are readers! Subscribe now and get 3 magazines for the price of 1. Get Ministry Today, Charisma and SpiritLed Woman all for $24. YES – Sign me up!
3 Reasons Why you should read Life in the Spirit. 1) Get to know the Holy Spirit. 2) Learn to enter God’s presence 3) Hear God’s voice clearly! Click Here to draw closer to God!
Did you enjoy this blog? Click here to receive it by email.
Love For His People, Inc. founded in 2010 by Steve & Laurie Martin. Charlotte, NC USA