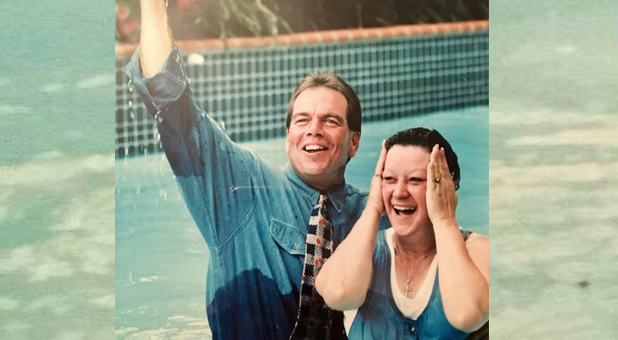 2/18/2017 DR. JIM GARLOW/SKYLINE CHURCH, SAN DIEGO   chariSMa news
Norma McCorvey, the “Jane Roe” of the infamous Roe v. Wade case—Henry Wade was District Attorney in Dallas, TX at the time—that decriminalized the killing of pre-born babies (and with its companion case, Doe v. Bolton, allowed the killing to continue right through the third trimester), died Saturday, Feb. 18, 2017, at age 69.
It has been often noted that this case was built on a lie. Equally well known is the fact that McCorvey felt very “used” by the radical feminists at whose urging she was thrust into the national limelight. She would later explain that she never actually had an abortion and admitted the case was the “biggest mistake of her life.”
But there is more—much more—to the story. And that is McCorvey’s first encounter with Christians after her conversion.
History will remember her as “Jane Roe.” But eternity will forever know her as Norma McCorvey, a child of God. Why? Because she made a commitment to Christ more than two decades ago. While that fact is fairly well known, I would like to shed some additional light on her conversion and the first few days after that.
McCorvey worked in Dallas out of a pro-abortion office. Pastor Flip Benham, leader of Operation Rescue Dallas at the time, worked nearby in a pro-life office. Through that, McCorvey met Flip. Although they were polar opposites on the abortion issue, Flip demonstrated the love of Christ to her.
Flip was then and still is one of the greatest preacher/prophets in America. He is likely one of the boldest, most courageous persons I have ever met. He is fearless. But he is tender and loving. His Bible is worn out by its constant use, and he pleads with fellow Christians to read it through a minimum of once a year. His celebrity sons—Jason and David (known for being cut from a national TV show for their stand for traditional, biblical marriage)—have followed their dad as a role model and have read the entire Bible through a minimum of once a year since they were young teens.
McCorvey was stunned at Flip’s gentle, Christ-like love. She thought pro-lifers were, in accordance with pro-abortion reports, hateful and mean. What she encountered was the love of Jesus. Flip—who always carries a big Bible—began tenderly to share the Word with her. As a result, she received Jesus as Savior for her sins and became “a new creature” in the summer of 1995 and was baptized Aug. 8.
Flip had been a Free Methodist (not to be confused with the liberal United Methodist denomination) pastor, but he was not at that time pastoring a church. Since Flip and I were extremely close friends, he invited McCorvey to the church I was pastoring.
The first church she attended—just a few days after she became a believer—was Metroplex Chapel (Church of the Nazarene), located in Euless, Texas, in the heart of the Dallas-Fort Worth metropolitan area.
But what happened that day was almost as profound as her conversion. She was afraid to come to the church as she did not know how Christians might respond to her, given her identification with abortion. She arrived at the church building but was too fearful to come in. She drove around the parking lot several times trying to get the courage to get out of her car. She was afraid of what people might say to her or even do to her.
Finally, she saw Flip standing on the church steps looking for her. She trusted him, so she parked her car and came to Flip. He escorted her into the church. She sat with Flip during the service. I still recall exactly where they sat that Sunday, off to my left from my view from the platform, about two-thirds of the way to the back of the church.
With her and Flip’s permission, I introduced her at the end of the service, telling the congregation that “Jane Roe” of Roe v. Wade had come to Christ and had experienced forgiveness for her sins. I explained that she was present in the auditorium. I asked her to stand. She did. The crowd erupted in an extended standing ovation. McCorvey was shocked. She did not expect that.
After the service ended, nearly the entire church congregation formed an extremely long line to give her a hug and welcome her into the family of God. It was a profoundly moving and tender moment. Norma McCorvey, the “Jane Roe” of the infamous Roe v. Wade case had not only experienced the love and forgiveness of Jesus. She had now experienced the love and forgiveness of the body of Christ—the church. It was an exhilarating day for us all.
McCorvey would later say in a television ad, “You read about me in history books, but now I am dedicated to spreading the truth about preserving the dignity of all human life from natural conception to natural death.”
During the first half of her life, she was on the wrong side of history.  But that changed when she repented of her sins.  She joined “the right side of history.” But more importantly, she now enjoys the right side of eternity.

Dr. Jim Garlow is pastor of Skyline Church in the San Diego, California, area. His latest book is Well Versed: Biblical Answers to Today’s Tough Issues.
Leaders are readers! Subscribe now and get 3 magazines for the price of 1. Get Ministry Today, Charisma and SpiritLed Woman all for $24. YES – Sign me up!
3 Reasons Why you should read Life in the Spirit. 1) Get to know the Holy Spirit. 2) Learn to enter God’s presence 3) Hear God’s voice clearly! Click Here to draw closer to God!
Love For His People, Inc. founded in 2010 by Steve & Laurie Martin. Charlotte, NC USA