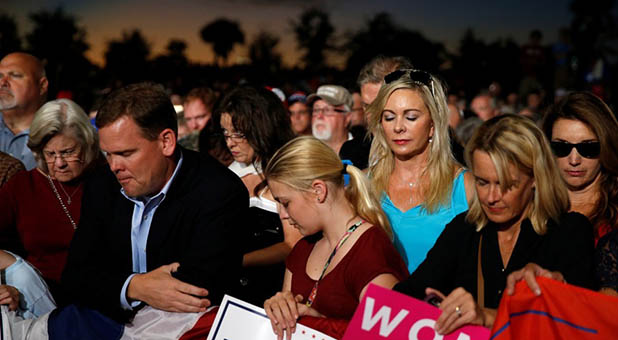 Religious Liberty in America Is in Peril

2/16/2017 BILL DONOHUE/CATHOLIC LEAGUES FOR RELIGIOUS AND CIVIL RIGHTS
On Feb. 16, the House Judiciary Subcommittee on the Constitution and Civil Justice will hold a hearing on “The State of Religious Liberty in America.” Hopefully, it will accelerate the push to secure this most fundamental of freedoms.
President Trump is considering an executive order on religious liberty, the draft of which holds much promise. But legislation is also needed: Religious liberty is currently imperiled on several fronts.
The war on religion—and that is exactly what it is—is being led by agents of government and activist groups seeking to impose a militant secular agenda on Americans. What drives them more than any other issue is an irresponsible interpretation of sexual freedom.
The activists and lawmakers pushing this cause accuse many religious institutions of resisting their agenda. They are correct. Traditional Catholics, evangelical Protestants, Orthodox Christians, Orthodox Jews, Mormons and Muslims all reject abortion and homosexuality, and they find attempts by the government to encroach on their beliefs and practices objectionable. There is much to object to, especially at the state level.
Many states are considering pro-abortion legislation. In Connecticut, they are weighing a bill that takes aim at a familiar target: crisis pregnancy centers. These centers are the epitome of choice: They give young pregnant girls the choice of giving their baby up for adoption, yet the pro-choice lobby works to deny them this choice.
In Illinois and Maryland, lawmakers are considering bills that would allow Medicaid and state employee health insurance to cover abortions.
In New York, Governor Andrew Cuomo is pushing the legislature to consider a bill that makes abortion legal for any reason and at any time during pregnancy, even if Roe v. Wade were overturned; he wants Roe codified in the New York State Constitution. Rhode Island lawmakers are studying similar legislation.
New Mexico is considering a bill that would force Catholic hospitals to pay for and perform abortions. The ACLU and other anti-Catholic organizations are lobbying for it.
Most outrageous, there is a coordinated effort going on in 18 states to expand abortion rights. Those behind these efforts want abortion to be covered in both public and private insurance plans, including Catholic ones.
This fight is being led by pro-abortion lawmakers in Arizona, California, Colorado, Connecticut, Georgia, Hawaii, Iowa, Kentucky, Maryland, Michigan, Minnesota, Missouri, New Mexico, Ohio, Oregon, Texas, Virginia and Wisconsin. In St. Louis, city lawmakers passed a bill last week that threatens to do the same.
On the LGBT front, the following states are weighing measures that would treat LGBT rights as analogous to race and religion in the workplace: Arizona, Florida, Georgia, Idaho, Kansas, Kentucky, Missouri, New Hampshire, North Dakota and Texas. Virginia Governor Terry McAuliffe recently signed an executive order that protects LGBT rights among state employees, contractors and subcontractors.
New York’s Cardinal Timothy Dolan, who chairs the bishops’ Committee on Pro-Life Activities, and Baltimore Archbishop William Lori, chairman of the Ad Hoc Committee for Religious Liberty, recently sent a letter to President Trump calling on him and his administration to make religious liberty protections a priority. They also called on Congress to do the same.
Lori specifically cited the Health and Human Services mandate issued by the Obama administration as a grave threat to religious liberty; it would make religious institutions such as the Little Sisters of the Poor pay for abortion-inducing drugs in their health care provisions.
The most immediate relief needed is to secure the kinds of religious exemptions in law that have been traditionally afforded. Not to do so is to allow the government to police Catholic non-profits and other religious entities.
President Trump needs to issue a strongly worded executive order on religious liberty, one as wide in scope as the law allows. Similarly, lawmakers at the local, state and federal levels need to pass bills that safeguard religious liberty from the heavy hand of government. At stake is the First Amendment and the beliefs and practices of millions of Americans.